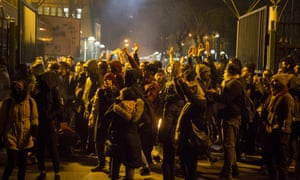 Several people wounded during demonstrations in Tehran over plane deaths

Iranian authorities appear to have fired live ammunition to disperse protesters in Tehran, wounding several people, according to witness accounts provided to the Guardian and footage circulating on social media.

Hundreds of protesters on Sunday defied a heavy security presence in the Iranian capital to hold vigils and demonstrations throughout the day and march in the evening on Azadi Square in the centre of the city.

A witness said security forces initially fired teargas to disperse the crowds and then started firing bullets. “It was a very bad situation,” the woman, who asked not to be identified, said in a message provided to the Iranian activist Masih Alinejad.

She provided a video from near Azadi Square showing blood stains along the pavement, one of several similar videos being circulated by Iranian activists on Sunday evening and Monday morning. “It’s the blood of our people,” a woman said in one clip.

“I saw seven people shot,” said a male voice in another video. “There is blood everywhere.” The veracity of the footage and witness accounts could not be independently verified.

Protesters wounded during demonstrations in Iran over downing of plane – video

Another video purportedly from near Azadi Square shows several people appearing to be wounded on the ground including a woman lying on a bloodied pavement. “They shot her with a bullet,” a man says.

There were demonstrations in several other cities but it was unclear if similar force had been used to disperse those. A protester in the south-central city of Shiraz said demonstrations there were relatively small and short. “People were sad and they lit some candles and shouted slogans,” said Mehdi, 49. “But most were middle class and so didn’t do any radical acts. They were dispersed by police after two hours.”

Small protests flared up at several universities in Tehran throughout Sunday against both the shooting down of the Ukraine International Airlines jet last Wednesday and the subsequent days of official denials that an Iranian missile was responsible.

“They tell us the lie that it is America, but our enemy is right here,” a crowd shouted at Tehran’s Shahid Beheshti University, and compared the Islamic Revolutionary Guards Corps and their paramilitary allies to Islamic State. “You’re our Isis,” they said.

As the sun went down, columns of security vans, including some fitted with cages, were seen heading towards Azadi Square. Several hundred protesters also made their way there, marching through subway stations and along streets, singing revolutionary anthems and chanting, “death to the dictator”.

Later footage showed floodlights illuminating teargas in the air and protesters wearing cloths across their mouths as they continued to chant anti-regime slogans. “They fired teargas in the Azadi subway station,” said a man in one clip. “No one can get out, everybody is getting suffocated.”

The UK was dragged into the furore on Sunday when pro-regime protesters set alight a British flag in front of the UK embassy in Tehran. The British ambassador was briefly detained on Saturday night and accused of coordinating protests – which he denies.

The resurgent anti-government protests threaten to tip Iran’s regime into crisis just as it was riding a wave of nationalist sentiment after the killing of top general Qassem Suleimani by a US drone strike on 3 January.

Iran’s response – a carefully calibrated but heavily publicised ballistic missile attack on US forces in Iraq last Wednesday – was supposed to bring catharsis and demonstrate the regime’s power.

Instead, by leading to the shooting down of a passenger jet carrying Iranian citizens, it has humiliated the military and exposed some of its top leaders as having lied to the country for days until the admission on Saturday morning.

Donald Trump used the unrest to intensify pressure on Iran and declare his support for the demonstrators. “DO NOT KILL YOUR PROTESTERS,” Trump said in a tweet aimed at the Iranian government. “The World is watching. More importantly, the USA is watching.”

Suffocating US sanctions have sent Iran into deep recession, and a rise in the official price of fuel in November led to the largest protests in the 40-year history of the regime, to which the government responded by cutting off internet for several days and killing hundreds of demonstrators.

On Sunday, in a meeting between Iran’s president, Hassan Rouhani, and the visiting emir of Qatar, both sides agreed de-escalation was the “only solution” to the regional crisis.

Emir Sheikh Tamim bin Hamad Al Thani said: “We agreed ... that the only solution to these crises is de-escalation from everyone and dialogue.”

The leaders of the UK, France and Germany on Sunday issued a joint statement calling on Iran to return to full compliance with a 2015 nuclear deal with world powers and refrain from further violence."