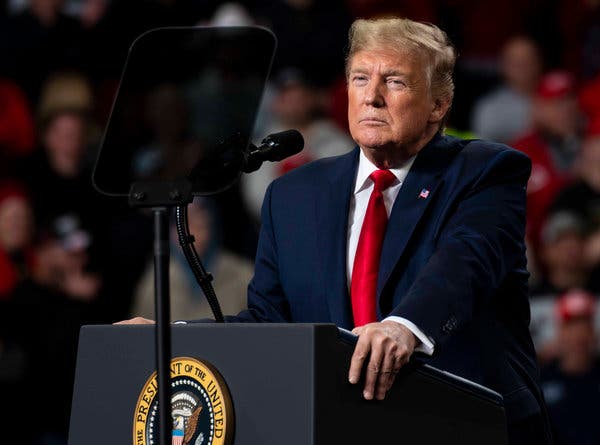 "As my Dad used to say "your lies will seek you out".

"WASHINGTON — In the 10 days since it carried out the drone strike that killed Maj. Gen. Qassim Suleimani, the Trump administration has been struggling to draft an after-the-fact narrative to justify it. On Monday, President Trump put an end to that hash of explanations. “It doesn’t really matter,” he tweeted, “because of his horrible past.”

Until that message on Twitter, the administration had insisted in various ways that General Suleimani, Iran’s most important military official, was planning myriad “imminent” attacks. The unraveling of the explanations accelerated over the weekend after Mr. Trump said four embassies were under immediate threat, a charge that his own administration could not back.

With the president’s latest utterance, he bolstered critics of a strike that had raised fears of an all-out war with Iran and had led Iraq to call on the United States to leave the country. And, the critics wondered, was it reckless and irresponsible for the United States to kill Iran’s second most important leader if the reason did not “really matter”?

“Trump has finally admitted the true motivation for the killing of Suleimani who had American blood on his hands: retaliation,” said Representative Ro Khanna, Democrat of California, who is sponsoring legislation to prevent the administration from spending federal funds on unauthorized military action in Iran.

Mr. Khanna and other congressional Democrats, who have complained about having been left in the dark both before and after the drone strike, interpreted Mr. Trump’s tweet as proof that he must seek authorization from Congress for any future strikes.

The administration’s explanations for the strike have been shifting from day to day, and Monday was no exception. Mr. Trump’s tweet came in response to unflattering articles about how Defense Secretary Mark T. Esper appeared to contradict the president’s claim that he believed there was an imminent threat on four American embassies in the Middle East.

But Mr. Trump said he did not see any inconsistencies at all.

“It’s been totally consistent,” he said late Monday afternoon as he left for New Orleans for the College Football Playoff championship game. “We killed Suleimani, the No. 1 terrorist in the world by every account. Bad person, killed a lot of Americans, killed a lot of people. We killed him.”

He added: “When the Democrats try and defend him, it’s a disgrace to our country. They can’t do that. And let me tell you, it’s not working politically very well for them.”

Still, the confused messaging from Mr. Trump and his top officials after the most high-stakes decision of his presidency threatened to undercut the message the administration was sending to Iran, experts said.

And that message was further undercut by other tweets that Mr. Trump sent on Monday morning. One of them included a photoshopped image of Senator Chuck Schumer and Speaker Nancy Pelosi wearing a turban and a head scarf in front of an Iranian flag, claiming it showed “the corrupted Dems trying their best to come to the Ayatollah’s rescue #NancyPelosiFakeNews.”

The retweeted image was the most extreme version of a sentiment that the president spent the morning advancing by retweeting criticism of Ms. Pelosi, and suggesting that she was a supporter of the Iranian government.

Ms. Pelosi has criticized the Trump administration for the killing of General Suleimani, saying it risked a “dangerous escalation of violence” and was based on questionable intelligence.

The president’s stream of Twitter posts targeting her appeared to be an attempt to assail her credibility the same week she was expected to send two articles of impeachment against Mr. Trump to the Senate. The tweet was also a reminder of the way Mr. Trump has in the past harnessed fears of Muslims and terrorism for his own political purposes.

Responding on Twitter, Mr. Schumer asked, “President Trump: How low can you go?”

Dana Shell Smith, a former United States ambassador to Qatar, wrote on Twitter that Mr. Trump was engaging in “hate speech against an entire religion.”

Mr. Trump’s retweet was also not the first time Republicans have tried to link Democrats to the Iranian government through the use of doctored images.

“This tweet contrasts so starkly with the seriousness of the actual situation with Iran,” said Ben Rhodes, a former top national security aide to Mr. Obama. “We are in the midst of a roiling crisis with Iran that is largely of Trump’s own making, and yet he continues to view that largely through the prism of pretty ugly domestic politics.”

Mr. Rhodes said the tweet underscored how Mr. Trump’s outlook had not changed since he first ran for office. “Trump views Iran policy as if it’s 2015 and he’s campaigning for president, not as if it’s 2020 and he is facing a crisis with huge real world dimensions for nuclear weapons, war and peace, and the Iranian people,” Mr. Rhodes said.

White House officials have often tried to sidestep answering for content that Mr. Trump shares online, but on Monday the press secretary, Stephanie Grisham, defended the photoshopped image. In an interview with Fox News, Ms. Grisham said the president was “making clear” that Democrats were “parroting Iranian talking points, almost taking the side of terrorists.”

She added that Mr. Trump was “making the point that the Democrats seem to hate him so much they’re willing to be on the side of countries and leadership of countries who want to kill Americans.”

Mr. Trump and the Republican National Committee specifically targeted Ms. Pelosi for a statement she made on ABC’s “This Week” on Sunday, when asked whether she supported anti-government demonstrations there that have emerged after Iran shot down a Ukrainian airliner shortly after it took off from Tehran.

Ms. Pelosi said there were “different reasons why people are in the street,” noting that the current protesters were reacting to Iran’s military admitting it accidentally shot down the Ukrainian airliner. She did not directly answer a question about whether it would be a “good thing if they brought the regime down.”

During Ms. Pelosi’s interview with George Stephanopoulos, she also said the Trump administration had not been “straight with the Congress of the United States” in its explanations for why it decided to target General Suleimani when it did.

The Trump campaign is hoping that the killing boosts his popularity. But a recent USA Today/Ipsos Poll found that a majority of respondents, 52 percent to 34 percent, viewed Mr. Trump’s action as “reckless.”

Mr. Trump spent the weekend expressing support online for the people of Iran calling for political and economic change, who participated in the largest popular protests in the country in more than 10 years.

On Monday morning, Mr. Trump lauded the protesters for supporting the United States. “Wow! The wonderful Iranian protesters refused to step on, or in any way denigrate, our Great American Flag,” Mr. Trump wrote on Twitter. “It was put on the street in order for them to trample it, and they walked around it instead. Big progress!”

A spokesman for Ms. Pelosi did not respond to a request for comment about Mr. Trump’s posts."

A Narrative Collapses as Trump Tweets: ‘It Doesn’t Really Matter’ - The New York Times
Posted by John H Armwood II at 7:08 AM