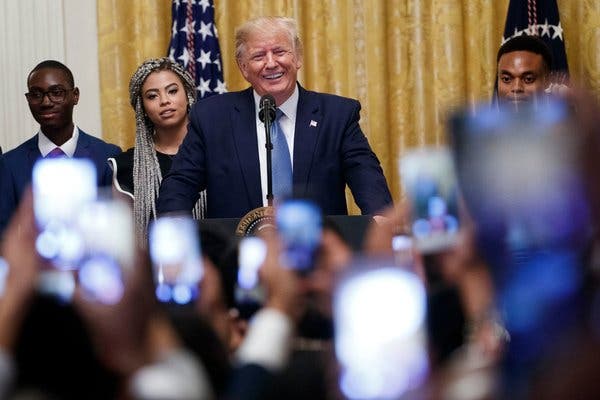 And an army is blindly following.

Oct. 4 was an interesting day.

It was a week and a half after the Democratic-led House opened a formal impeachment inquiry into Donald Trump, following a whistle-blower’s complaint alleging that he corruptly pressured Ukraine to investigate Democratic presidential candidate Joe Biden and his son.

Between the opening of the inquiry and Oct. 4, the White House released a summary of a phone call between Trump and Ukraine’s president, which only seemed to confirm the whistle-blower’s allegations. House Democrats continued to come out in favor of the investigation. And, on Oct. 3, Trump in broad daylight, in front of a gaggle of reporters, openly asked Ukraine and China to investigate Biden.

Impeachment at that point was looking almost inevitable. Trump’s abuse of power in this instance was irrefutable. Indeed, it was being affirmed by the abuser himself.

So, it was an odd bit of scheduling that throngs of young black conservatives arrived at the White House on Oct. 4 for the so-called Young Black Leadership Summit, apparently a brainchild of the brainwashed racial quisling Candace Owens, who once called Black Lives Matter protesters “a bunch of whiny toddlers, pretending to be oppressed for attention.”

Trump took the mic before the crowd in the East Room and soon called on Owens to speak. She introduced the topic of the moment and expressed her stance: “Let me say this: The media — the audacity of them to think that they’re going to impeach our president.” The audience booed. Owens continued: “No. It’s not happening. It’s absolutely not happening. Not under our watch. We need to make sure we fight for this man — the one man who is standing up for black America, we are going to fight for, guys. We have to keep it going.” The audience clapped.

adore him. As Williams put it:

“First of all, I just want to say I love President Donald J. Trump.”

“The media is attacking him. But when they attack him, they are attacking us.”

The audience applauded yet again, as a wide Cheshire cat grin spread across Trump’s face and he patted Williams on the arm.

This idea — that Trump is the embodiment of Republican voters and a personification of their ambitions and fears, and therefore, attempts to punish him are spiritually transferable and translatable as an attack on individual Republicans and the party as a whole — seemed to seize Trump’s imagination as a perfect way of positioning the impeachment inquiry.

At a rally in Dallas nearly two weeks later, Trump tried out the message before a live audience:

The crowd applauded as Trump pursed his lips and surveyed the success of how the line had landed. It was a winner. It was a keeper.

Trump was making himself into the voodoo doll of conservative politics: Whatever pain he felt, his supporters would feel, and they would object to it in unison.

This is Trump’s army. And he is warning his congressional generals, the lawmakers who protect and defend him, that there will be no defections, lest the army turn on them.

At least since August, Trump has been tweeting his stratospheric approval rating among Republicans every few days. That is less about informing than warning. This message is to Republican politicians, those who will hold his fate in their hands as the impeachment process unfolds, to stay in line and toe the line.

This week, Trump said of his impending impeachment: “All Republicans must remember what they are witnessing here — a lynching. But we will WIN!”

It was not “I” will win, but “we” will, because this isn’t happening to me alone but to us. These Democrats — the women, the minorities, the Jewish, the gay — are torturing the white man. And he inverted the language of anti-black white supremacist terror to make the hollow point of white supremacist patriarchal victimhood.

White men have always made the rules, and the most powerful and most wealthy have lived above them. Holding this white man to account is a threat to white power, to his power, to his supporters’ power.

For Trump’s supporters, he has made his malpractice appear in their mirrors.

Only in the strange, upside down days in which we now live could a young black comedian offer the ideal framing of Trump’s message of white supremacist solidarity."

Opinion | Donald Trump, Life of a Zombie Party - The New York Times
Posted by John H Armwood II at 10:11 AM