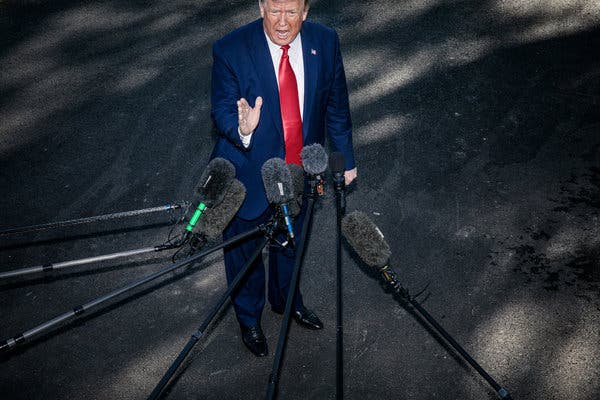 "The news cycle has already blown past it, but I think we should dwell a little more on that time, just a few days ago, when President Trump declared himself above the Constitution.
No, the president did not say, “I am above the Constitution.” But that was the gist of the eight-page letter sent on his behalf to the House speaker, Nancy Pelosi, and the Democratic majority, not just contesting the impeachment inquiry but challenging the very idea of presidential accountability.
[Join Jamelle Bouie as he shines a light on overlooked writing, culture and ideas from around the internet. For exclusive thoughts, photos and reading recommendations, sign up for his newsletter.]
With that letter, Trump all but announced his monarchal pretensions — that he is the presidency and the presidency is him. And while there are other, juicier stories to follow in this impeachment saga — just yesterday, two associates of Rudy Giuliani were arrested and charged with federal crimes — this event is significant for what it underscores about the moment. In short, we are living through a bona fide constitutional crisis.
“President Trump and his Administration reject your baseless, unconstitutional efforts to overturn the democratic process,” reads the letter from Pat Cipollone, who serves as counsel to the president. Cipollone also accuses House Democrats of violating the due process rights of the president and insists that impeachment is invalid if it isn’t begun by an official resolution. He continues: “Your transparent rush to judgment, lack of democratically accountable authorization, and violation of basic rights in the current proceedings make clear the illegitimate, partisan purpose of this purported ‘impeachment inquiry’. ”
It’s all a little dramatic. Cipollone goes on:

Your unprecedented action has left the president with no choice. In order to fulfill his duties to the American people, the Constitution, the executive branch and all future occupants of the office of the presidency, President Trump and his administration cannot participate in your partisan and unconstitutional inquiry under these circumstances.

Most of this is nonsense. The Constitution only specifies the basics of impeachment: The House initiates it and the Senate votes on it. Everything else is left to the respective chambers. No particular process is required. The House is fully empowered to collect evidence, take testimony and subpoena witnesses without passing a resolution to announce it is considering impeachment. The House acts as a kind of grand jury — where the “Articles of Impeachment” correspond to the counts in an indictment — with no obligation to take witnesses from the defense. That will come later, if the House impeaches and the Senate holds a trial. In addition to its nakedly partisan claims, the White House is also making its case with constitutional language, but there is no constitutional support for its arguments.
But we shouldn’t get bogged down in the particulars of the letter or its tenuous relationship to the facts. The problem with the White House response is not that it’s wrong, but that it’s an assertion of unaccountable power. To call impeachment “illegitimate” and reject Congress’s ability to conduct oversight is to put forth a doctrine of presidential infallibility, an extreme form of Richard Nixon’s quip that “when the president does it, that means it is not illegal.” To refuse cooperation and compliance is to challenge the constitutional prerogative of a coequal branch of government.
The framers understood that re-election wasn’t enough to compel good behavior from the chief executive. As James Madison argued during the constitutional convention of 1787, impeachment exists as a safeguard against the “incapacity, negligence or perfidy of the chief magistrate.” But Trump, speaking through Cipollone, rejects this. To this White House, elections are the only acceptable form of accountability. “The decision as to who will be elected President in 2020 should rest with the people of the United States, exactly where the Constitution places it.”
What’s worse is that, according to a longstanding opinion from the Justice Department’s Office of Legal Counsel, a president cannot be indicted while still in office. If impeachment is illegitimate and Trump intends to defy all congressional subpoenas and investigation, then he’s suddenly untethered the office from the entire constitutional system. He becomes what the framers feared — an elected king, answerable only to his supporters. (Here it’s worth noting the hypocrisy of relying on the Constitution when it justifies his own power — Trump is only president because of the Electoral College — and rejecting it when that power is challenged.)
Within weeks of Trump’s taking office, scholars and observers wondered if he would precipitate a constitutional crisis. The verdict was uncertain. Yes, he attacked judges, urged officials to ignore court orders and claimed vast powers for his administration. But when challenged by the courts, or the Republican-held Congress, he backed down.
Now, he faces a hostile majority. And that changes the dynamic. Political ruin is on the horizon and Trump — with his clear taste for autocrats and autocracy — will undermine American democracy if that will keep it at bay.
I say this as if it’s a surprise, but of course it’s not. Trump is an authoritarian by instinct, with little respect for our democratic traditions, much less the Constitution. Of coursehe’d flout Congress’s authority and trash the separation of powers to protect himself from accountability. It’s the most predictable choice he could make.
As long as Republicans continue to stick with the president, the only question now is how Democrats respond. Trump’s refusal to cooperate or comply is itself an impeachable offense, one more transgression to add to any articles drafted by the House. But there’s still the immediate problem of meeting White House escalation head on.
Democrats can do this by using all the authority they have at their disposal. The House can impeach officials, like Secretary of State Mike Pompeo, who participate in the president’s obstruction. It can even hold uncooperative officials in contempt and detain them for rejecting subpoenas.
The Constitution cannot enforce itself. The only way to stop an attack on separation of powers is to push back with equal force. The president and his allies think they can reject congressional oversight. It’s up to Democrats to bring the fight into public view and force the Trump camp to see that it is Congress that has the authority in this conflict. Trump may want it to be one way, but for the sake of the Constitution, he needs to understand that it’s the other way."