Opinion | What Trump Is Teaching Our Children 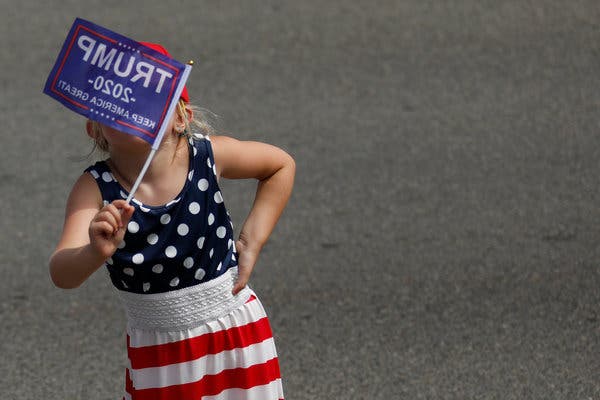 Part of the president’s job is to inspire young Americans to be better citizens. Trump is doing the opposite.

When our children are young, we work doggedly to foster in them a deep and abiding sense of morality, ethics and character.

We try to teach them to always tell the truth, to be kind and generous, to be brave enough to do the right thing even if others aren’t as brave.

We try to teach them empathy and compassion, that caring about the less fortunate betters society and is also self-edifying.

We teach them to be gracious and thankful and not to brag or bully. Also, don’t lie, cheat or steal.

We teach them to have self-respect and to respect others. We teach them that everyone is equally worthy and valuable, no matter who they are, what they look like, how much or little they have or to which God they pray, if they pray at all.

We do all this as our children are coming to know how honor and integrity are constructed, maintained and defended. We want to raise good people and good citizens, people who respect society and follow the rules, though not blindly. We want them to question the world, and if they identify injustice, work to eliminate it.

We as parents are the first teachers, the most important ones, but there are many tangential teachers as well, at family gatherings, at school, at places of worship, on playgrounds, and also in literature, on television and on social media.

The president of the United States is one of those teachers. I don’t think many children follow a president or the politics around that presidency on a routine basis, but the sense of the president sinks in.

They know that the president should be one of the best of us, not the worst. When children do well, adults often say, “You could be president someday.” The presidents who children are taught to venerate are those who are judged to have been honorable men who changed the country for the better.

This is on some level hagiography — scratch the surface and the flaws are revealed — but there is also value in the lessons.

Trump is exploding all of that. He is everything we teach our children not to be. In Trump’s world of immorality, the lessons being taught undo all the principles parents struggle to instill.

He is teaching our children that there is no absolute truth, there is “alternative fact.” It’s not what you say, but how you say it and how vociferously you can defend it.

He is teaching little boys that women’s bodies exist as playgrounds for privileged men, and that there is no price to be paid if you are popular enough or rich enough.

He is teaching little girls that if they are ever victims of sexual assault by a popular, wealthy boy and deign to reveal it, they will likely to come under withering verbal assault.

He is teaching our children that the color of one’s skin does indeed supersede the content of one’s character. He is teaching them that there is a skin-color hierarchy in which whiteness is perched on top.

He is teaching the black and brown children that their citizenship and connection to this country is tenuous and fractional, not like white children.

He is teaching them that it is a perfectly normal to separate some children from their parents, put them in cages, and argue that they don’t need soap, or toothbrushes or have the lights turned off so that they can go to sleep.

He is teaching them to never acknowledge an error, that apologies are for suckers, that what’s right is whatever you say it is.

And, here’s the thing: The children growing up in enormous portions of American households accept, defend and even applaud Trump’s behavior. What lessons are those children absorbing? What behaviors will be modeled on Trump’s example?

My own children came of age in their political awareness under President Obama. I didn’t always agree with his policy, but he was an honorable man whom I could point to as an honorable example.

What do Trump’s supporters tell their children about his incessant lying, the multiple accusations that he either was sexually inappropriate with women, assaulted them or even raped them?

How do they explain Trump’s racism to these children?

The example Trump is setting will outlast him. In the same way the Obama’s example helped reinforce for my children that anything is possible with hard work and perseverance, I fear today’s children are being taught that there are no rules for he who wins.

The next generation of politicians, doctors and lawyers are watching us all right now, and they are watching him. And, Trump is teaching them that you can be the worst version of yourself, rise to the most powerful position in the world and scare people into not holding you accountable. Congratulations, America."

Opinion | What Trump Is Teaching Our Children
Posted by John H Armwood II at 12:33 PM