What We Know About Joe Biden’s Record on School Busing. Biden blatantly lied in the debate about his opposition to busing as a tool to implement the Court ordered integration of the schools as a result of the 1954 Brown vs the school board of Topeka Kansas. 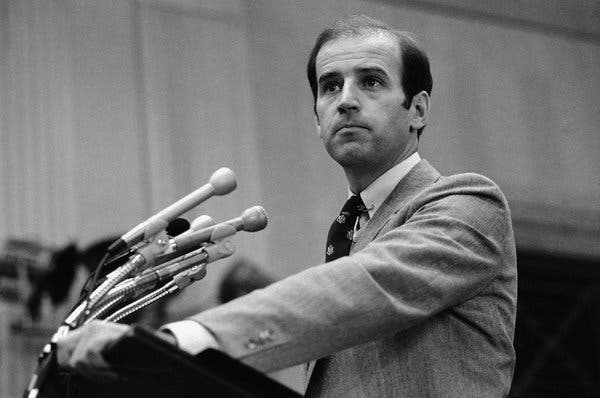 Biden blatantly lied in the debate about his opposition to busing as a tool to implement the Court ordered integration of the schools as a result of the 1954 Brown vs the school board of Topeka Kansas.

"Mr. Biden called her remarks “a mischaracterization of my position across the board.” And when Ms. Harris asked moments later whether Mr. Biden would agree that he had been “wrong to oppose busing in America,” Mr. Biden again pushed back on the premise.

“I did not oppose busing in America,” Mr. Biden said. “What I opposed is busing ordered by the Department of Education.”

In reality, Mr. Biden was a leading opponent of busing in the Senate during the 1970s and 1980s, and his opposition went beyond the federal government’s role in the practice.

But speaking at a conference Friday in Chicago, Mr. Biden doubled down, claiming that he had “never, never, never ever opposed voluntary busing” like the program Ms. Harris participated in as a child, implicitly drawing a distinction between voluntary busing allowed by some local governments and the mandatory, court-ordered busing that also took place decades ago.

Then he added: “I’ve always been in favor of using federal authority to overcome state-initiated segregation.”

Here’s a look at what we know about Mr. Biden’s record in the 1970s and ’80s, as a senator from Delaware, and how it squares with the claims he made this week.

Mr. Biden was a liberal on most civil rights issues, but he did not support integrating schools through busing from the 1970s to the 1980s.

In 1975, Mr. Biden supported a sweeping anti-busing measure offered by the segregationist Senator Jesse Helms of North Carolina, and he offered his own less stringent anti-busing amendment to an appropriations bill.

“I oppose busing,” he said in an interview in 1975. “It’s an asinine concept, the utility of which has never been proven to me.”

“The new integration plans being offered are really just quota-systems to assure a certain number of blacks, Chicanos, or whatever in each school,” he added. “That, to me, is the most racist concept you can come up with; what it says is, ‘in order for your child with curly black hair, brown eyes and dark skin to be able to learn anything, he needs to sit next to my blond-haired, blue-eyed son.’ That’s racist! Who the hell do we think we are, that the only way a black man or woman can learn is if they rub shoulders with my white child?”

He went on: “The problem, you see, is that the courts have gone overboard in their interpretation of what is required to remedy unlawful segregation. It is one thing to say that you cannot keep a black man from using this bathroom, and something quite different to say that one out of every five people who use this bathroom must be black.”

Mr. Biden introduced another proposal in 1976 that blocked the Justice Department from seeking busing as a desegregation tool, and co-sponsored an amendment in 1977 that limited federal funding of busing efforts. He continued his efforts that year with a bill curbing court-ordered busing.

In February 1982, he voted for an amendment to a Justice Department appropriations bill described as the “toughest anti-busing rider ever approved by either chamber of Congress.” A month later, he voted in favor of another amendment that allowed the Justice Department to participate in litigation “to remove or reduce the requirement of busing in existing court decrees or judgments.”

A spokesman for Mr. Biden recently told The New York Times that he had always supported integration, but that he did not think busing was the right mechanism to achieve it. The spokesman also said Mr. Biden thought busing placed an undue burden on African-American families. In an attempt to highlight other aspects of Mr. Biden’s record on civil rights, he pointed to comments in 1975 calling for housing and employment integration, and in 1986 pressing Justice William H. Rehnquist on integration.

Dismal support for busing in ’70s

To some extent, Mr. Biden’s opposition to busing reflected the majority of the country at the time. Polling in the 1970s found only single-digit support for the practice.

“Busing is unpopular for many reasons,” The New York Times reported in 1978. “Some parents say they fear that their children will be unsafe or get an inferior education; many parents and children say they sincerely prefer the neighborhood school concept; the comments of some are racist.”

Research has shown that nationwide, the segregation of black students in public schools declined significantly between 1968 and 1980, the period during which the courts decided that busing could be used to aid school integration. And indeed, a 1999 Gallup poll showed that Americans believed busing had served a positive historical purpose in improving the education of African-American students.

But by that time, most busing plans had been dismantled and were considered by some to be a vestige of a different era. In line with that sentiment, the majority of respondents to the Gallup poll said they would prefer to integrate schools through methods other than busing.

A ‘liberal train wreck’ in Delaware

In his 2007 memoir, Mr. Biden discussed a cross-district busing effort in the 1970s aimed at desegregating schools in a county in Delaware — his home state.

Busing, Mr. Biden said, was a “liberal train wreck” that was “tearing people apart” there. In the book, he argued that it was forcing some students to travel great distances and some teachers to transfer and take pay cuts. Black and white parents alike, he said, were “terrified.”

He spoke out publicly against Delaware’s court-ordered school-busing program, arguing that the money spent on transportation could be better spent on other educational needs, and that it made no sense to stop students from attending a school just blocks away from their homes.

He would later recount telling constituents that “I was against busing to remedy de facto segregation owing to housing patterns and community comfort, but if it was intentional segregation, I’d personally pay for helicopters to move the children.”

Mr. Biden’s remarks on Friday about never having been opposed to “voluntary” busing appeared to echo an argument he made the night before, on the debate stage.

At one point during his exchange with Ms. Harris, Mr. Biden noted that she had been able to participate in a busing program because of “a local decision” made by a City Council to allow it.

Ms. Harris pushed back, saying that it had been almost two decades since Brown v. Board of Education and that states had largely failed to integrate public schools. As a result, she argued, it was the federal government’s responsibility to step in.

On Friday, Mr. Biden told the crowd gathered in Chicago: “Folks, the discussion in this race today shouldn’t be about the past.”

What We Know About Joe Biden’s Record on School Busing
Posted by John H Armwood II at 8:36 AM