Opinion | Th Princess vs. the Demagogue 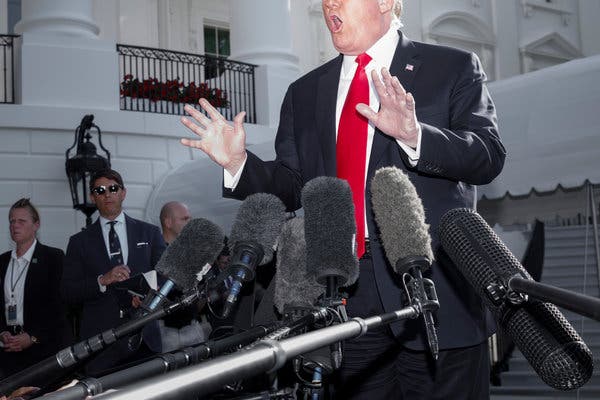 In an interview, Saturday with Rupert Murdoch’s right-wing British tabloid, The Sun, President Trump characterized statements by Meghan Markle, before she became Duchess of Sussex, as “nasty” during the 2016 campaign.

Of course, Trump was being led in this exchange to be precisely who we all know he is. The question itself was problematic, as it disclosed a biased characterization by the journalist, who asks Trump: “Are you sorry not to see her because she wasn’t so nice about you during the campaign? I don’t know if you saw that.”

Nice? That’s right, an antonym to nasty. It was a setup, but one that both parties wanted.

The Sun is in some ways like a British print edition of America’s Fox News, but it is also Britain’s largest paper. That’s the paradox.

Indeed, shortly after the 2015 Paris terrorist attacks, The Sun published an ominous headline that covered nearly all of the front page. In a large white font on a black background the paper asserted: “1 in 5 Brit Muslims’ sympathy for jihadis.” As The Independent reported, the headline was “accompanied by an image of British ISIS member Mohammad Emwazi, also known as ‘Jihadi John,’ ” who is hoisting a knife. There is a reference to a piece entitled, “Time for Britain to Shut Door.” The paper was ordered to admit that the story was “significantly misleading.”

But, you can understand why Trump would be amenable to an interview with the paper and why they would be thrilled to interview Trump on the eve of his visit to the country.

But it was simply wrong to categorize Markle’s comments as nasty; they were simply factual. She said in a 2016 interview on “The Nightly Show with Larry Wilmore” that Trump was divisive and misogynistic and vocal about it.

A better journalist, if he or she wanted to have Trump weigh in on the comments, would simply read Markle’s response and ask for the president’s response.

But, they didn’t, and Trump went directly to the place he feels most comfortable, referring to women who oppose him as nasty.

I have no royalist fetish or reverence. Indeed, I find the existence of royalty in any society problematic. But this isn’t as much about Trump’s reaction to a princess as it is about his reaction to a woman, in this case, a black woman.

As Caroline Light, a gender studies professor at Harvard, told The Washington Post in 2015 after Trump called Hillary Clinton a “nasty woman” during a presidential debate, this labeling dates to colonial times when “a ‘nasty’ woman is one who refuses to remain in her proper place, as defined by men. One who challenges male authority.”

There is no way to review the way Trump has spoken of and treated the women to whom he’s been attracted to or those with whom he has disagreed, and see anything other than sexism and misogyny.

Lest we ever forget: Trump was caught on tape bragging about sexually assaulting women and boasting: “When you’re a star, they let you do it. You can do anything.”

Lest we forget: Buzzfeed reported in 2016 that some contestants in the 1997 Teen USA competition complained that Trump “walked into the dressing room while contestants — some as young as 15 — were changing.” In a 2005 exchange on the Howard Stern show about the prospect of having sex with Miss Universe and Miss USA contestants, CNN reported this passage:

“Well, I’ll tell you the funniest is that before a show, I’ll go backstage and everyone’s getting dressed, and everything else, and you know, no men are anywhere, and I’m allowed to go in because I’m the owner of the pageant and therefore I’m inspecting it,” Trump said. “You know, I’m inspecting because I want to make sure that everything is good.”

This says nothing of Trump allowing Stern during another interview to refer to his daughter, Ivanka Trump, as “a piece of ass,” and Trump himself saying of her during that interview that “She’s actually always been very voluptuous.”

And then, there are all the ways that he has attacked the women who have dared to stand up to him — Hillary Clinton, Carly Fiorina, Nancy Pelosi, Maxine Waters, Elizabeth Warren, Frederica Wilson, and the list goes on — attacking their looks or calling them in some way feeble, of mind or body.

Trump is divisive and misogynistic. Score one for the princess.

Now, I’m sure that Trump is not a student of history, colonial or otherwise. But, one doesn’t have to understand the etymology of a word or phrase to propagate its poison or to embody its intentions.

Society itself offers a graduate-level course in misogyny, and every exam is a take-home test. The real work comes in consciously combating our bias and attempting to deprogram ourselves from blindly accepting privileges and ignoring oppressions.

But, here’s the thing: Trump is absolutely a misogynist and he has made no discernible attempts to repent of it or offer contrition over it."

Opinion | The Princess vs. the Demagogue
Posted by John H Armwood II at 10:30 AM