Opinion | The Trouble With Joe and Bernie - The New York Times 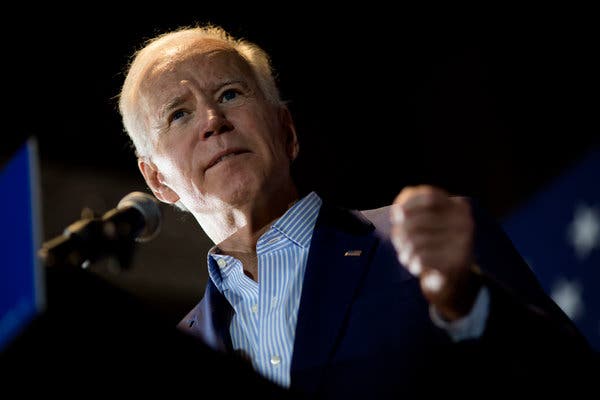 A clear look at political reality

Joe Biden at a campaign rally in Iowa last week.

Photo by: Eric Thayer for The New York Times

It’s still very early, but Joe Biden has emerged as the clear front-runner for the Democratic nomination. Bernie Sanders is in second place, although he appears to be fairly far behind, and one poll shows him in a statistical tie with Elizabeth Warren. So what should we think about the men currently leading the field?

Well, I have concerns. Not about electability, a topic about which nobody knows anything. Never mind what today’s general election polls say: What will polling look like after the inevitable Republican smear campaign? The answer to this question depends, in turn, on whether news organizations will cooperate with those smears as gleefully as they did in 2016.

No, my concerns are about what will happen if either man wins. Are they ready for the political trench warfare that would inevitably follow a Democratic victory?

The trouble with both Biden and Sanders is that each, in his own way, seems to believe that he has unique powers of persuasion that will let him defy the harsh reality of today’s tribal politics. And this lack of realism could set either of them up for failure.

But we’ve already seen this movie, and it was a tragedy. Barack Obama took office with a message of unity and bipartisan outreach, and a sincere belief that he could get many Republicans to back his efforts to revive the economy, reform health care, and more. What he faced instead was total scorched-earth opposition.

And Obama’s belief that he could transcend partisanship nearly sank his presidency. Crucial months were wasted trying to devise health reform legislation that could attract Republican support; Obama’s signature achievement happened only because Nancy Pelosi’s heroic efforts dragged the Affordable Care Act across the finish line. He was willing to make a “grand bargain” with Republicans that would have undermined Medicare and Social Security, deeply damaging the Democratic brand; he was saved only by the G.O.P.’s total intransigence, its unwillingness to contribute a single penny’s worth of tax increases.

The big concern about a Biden presidency is that he would repeat all of Obama’s early mistakes, squandering any momentum from electoral victory in pursuit of a bipartisan dream that should have died long ago.

Sanders, by contrast, doesn’t do bipartisanship. He doesn’t even do unipartisanship, refusing to call himself a Democrat even as he seeks the party’s nomination. But what Sanders appears to believe is that he can convince voters not just to support progressive policies, but to support sweeping policy changes that would try to fix things most people don’t consider broken.

That, after all, is what his Medicare for All push, which would eliminate private insurance, amounts to. He is saying to the 180 million Americans who currently have private insurance, many of whom are satisfied with their coverage: “I’m going to take away the insurance you have and replace it with a government program. Also, you’re going to pay a lot more in taxes. But trust me, the program will be better than what you have now, and the new taxes will be less than you currently pay in premiums.”

Could those claims be true? Yes. Will voters believe them? Probably not. Polling shows that support for Medicare for All falls off drastically when people are informed that it would eliminate private insurance and require higher taxes.

You might try to rationalize the Sanders position by saying that Medicare for All is an aspirational plan, and that in practice he would be willing to accept a more gradualist approach. But that’s not what his behavior suggests. On the contrary, Sanders has conspicuously refused to support measures that would enhance Obamacare, even as a temporary expedient.

For Sanders, then, it seems to be single-payer or bust. And what that would mean, with very high likelihood, is … bust.

We’re not talking about right versus left here. The Democratic Party has become much more solidly progressive than it used to be, and that will be reflected in the policies of any Democrat who makes it to the White House. The issue, instead, is whether he or she will be willing to face up to the harsh realities of today’s politics.

Democratic candidates in the next tier of the current race seem to get it. Warren’s proposals are very progressive, but they’re also incremental, and even her fairly radical ideas, like her proposed wealth tax, poll well. Anyone who watched Kamala Harris at Wednesday’s Barr hearing knows that she has no illusions about the state of partisanship.

Biden and Sanders, however, come across as romantics. Biden appears stuck in the past, when real bipartisanship sometimes happened. Sanders appears to live in an imaginary future, where a popular tidal wave washes away all political obstacles. Neither man seems ready for the tough fights that will follow even if he wins."

Opinion | The Trouble With Joe and Bernie - The New York Times
Posted by John H Armwood II at 6:31 AM