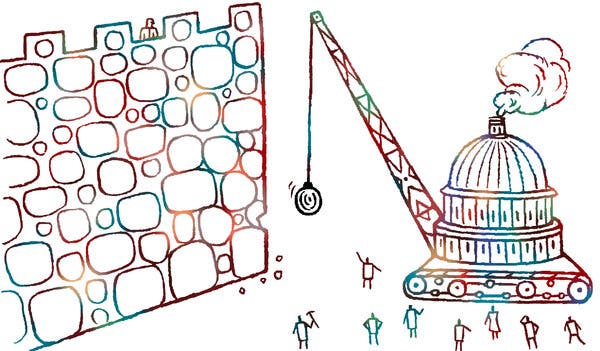 By The Editorial Board
May 9, 2019
"Nancy Pelosi, the speaker of the House, on Thursday pronounced the United States to be in a “constitutional crisis,” saying that President Trump has crossed a line with his war on congressional oversight. “Every day they are advertising their obstruction of justice by ignoring subpoenas and by just declaring that people shouldn’t come speak to Congress,” the speaker said.
On Wednesday, the House Judiciary Committee moved to hold Attorney General William Barr in contempt of Congress for refusing to hand over an unedited version of the Mueller report. Mr. Trump responded by claiming executive privilege for the full document and its underlying evidence. The president has instructed Donald McGahn, the former White House counsel, not to comply with subpoenas for documents related to the Mueller investigation and has said he will block Mr. McGahn from testifying before the House Judiciary Committee. Mr. Trump has also said that there is no reason for his son Don Jr. to provide more testimony to the Senate Intelligence Committee.
“We’re fighting all the subpoenas,” Mr. Trump said late last month.
With each new act of defiance, Democrats have struggled to find ways to compel the administration’s cooperation — and to stop the president’s assault on the American government’s system of checks and balances. They are also growing more frustrated. At this point, it will probably fall to the courts to resolve many of these skirmishes. And, though Democrats are seen as having the legal edge, many members fear the battle will get bogged down in litigation until after the 2020 election.
But even as Mr. Trump flaunts his disregard for constitutional basics, Democrats would be best served by honing their legal strategy while avoiding political stunts.
For instance, multiple members, including Maryland’s Elijah Cummings, the chairman of the House oversight committee, have said Democrats should consider resurrecting “the power of inherent contempt,” which allows Congress to arrest and jail individuals who refuse to comply with subpoenas. But that arcane process has not been used since the 1930s, and no one seriously expects Congress to dispatch the House sergeant-at-arms to drag Mr. Barr from the Department of Justice in handcuffs.
House Democrats are also threatening to financially penalize officials who impede investigations, either by fining them or withholding their pay. This option would be less theatrical, and it’s unclear how effective it would be. Having already sacrificed so much to stick by their president, it seems unlikely that docked pay would prompt a course correction by Mr. Barr, Treasury Secretary Steven Mnuchin or other officials — whom Mr. Trump would promptly celebrate as political martyrs.
Democrats’ most promising avenue remains with the courts. Already, suits have been filed to compel the release of documents. Oral arguments begin next week for the House oversight committee’s request for a decade of Mr. Trump’s financial records. And the full House is set to vote on whether to send a contempt citation for Mr. Barr to the courts — though Ms. Pelosi has suggested they may wait to see how the situation with Mr. McGahn plays out. If Mr. McGahn refuses to appear before the House Judiciary Committee by May 21, its chairman, New York’s Jerrold Nadler, has threatened to hold him in contempt as well. If the president doesn’t put an end to his obstruction campaign, Ms. Pelosi has warned, contempt votes for other officials are likely to follow.
As the action moves to the often snail-like legal system, Democrats must stress the compelling public need for speed. In one promising sign, on Thursday, a United States District Court judge moved to expedite the hearing on Mr. Trump’s business records. Democrats should also ponder ways to secure enforcement of any court victories — especially if they suspect the president may try to defy them.
One idea under consideration is bundling together multiple contempt citations to refer to the courts en masse. For lawmakers, this would have the practical advantage of minimizing the amount of floor time consumed by contempt votes. If the courts ruled in Congress’s favor, it would give the win more punch than having individual cases dribbling out over time.
Of course, if the president decides to flout any of the court rulings, the country could find itself in a deeper constitutional crisis. There is no precedent for a modern president openly defying both Congress and the courts."