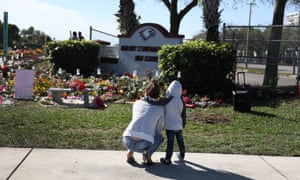 "Florida’s new law allowing teachers to carry guns in their classrooms is largely impotent, research by the Guardian has found, with dozens of school districts across the state rejecting the controversial measure.

Ron DeSantis, the Florida governor, signed the bill into law on Wednesday that expands a campus “armed guardian” program established in the wake of the 2018 Marjory Stoneman Douglas high school massacre to include trained teacher volunteers.

According to the Republican lawmakers who pushed through the bill last week despite criticism from teachers, gun safety groups and several law enforcement agencies, the move was designed to improve the security of students, especially in rural counties where a police response to any incident could be slower.

But after leaving Florida’s 67 counties to make their own decision about allowing teachers to participate, the scale of opposition quickly became apparent. Following the bill’s passage, the Guardian canvassed the 25 largest school districts by size, covering more than 2.3 million of the state’s 2.8 million school-age children, and established from interviews, a study of public statements and resolutions passed by school board members, that none were planning to allow their teachers to be armed.

Additionally, several district superintendents have spoken out strongly against the law, including those in Miami-Dade, Broward, Hillsborough and Orange counties, the four most populated districts with a combined student count of more than 1 million.

“The school board voted on a resolution against arming teachers more than a year ago,” Robert Runcie, the superintendent of the Broward school district that includes Stoneman Douglas (MSD), said in a statement also sent to parents.

“We did that because we want our schools to be safe places for teaching and for learning. We do not want to create a psychological impact on our children knowing their teachers have guns, nor create stress on our teachers as they deal with more non-instructional duties. Arming teachers will create an unsafe environment.”

Tony Gregory, the Broward county sheriff recently appointed by DeSantis, backed Runcie’s comments in a strongly-worded letter in which he said Florida legislators “missed the mark by proposing to arm teachers”.

“Having untrained personnel carrying firearms is more likely to create a tragic scenario where innocent people can get injured or killed,” he warned. “Having more firearms in an active shooter situation would make it more difficult for police officers to identify the shooter.”

Broward was among 25 counties that signed up for the Aaron Feis guardian program, named for the MSD football coach who was one of the 17 victims of last year’s Valentine’s Day shooting. Initially, the program, created by last year’s MSD high school safety act and run in conjunction with local police and sheriff’s agencies, allowed non-teaching volunteers to train to act as armed campus monitors to supplement or in some cases take the place of law enforcement personnel.

A memorial at Marjory Stoneman Douglas high school in honor of those killed during a mass shooting on 14 February 2018 in Parkland, Florida. Photograph: Joe Raedle/Getty Images

But many counties struggled to find volunteers and when the state commission investigating the tragedy recommended in January to expand the program to include teachers, Republicans were quick to run again with the idea. They drew up a bill that offered the opportunity for teachers to undergo 140 hours of firearms training and become guardians, and found a willing ally in DeSantis.

Yet even among some counties that signed up to the guardian program, and whose sheriffs strongly support the law, there is no appetite for placing weapons in the hands of teachers. In Pinellas county, which has 103,000 students and where the MSD commission chairman, Bob Gualtieri, is sheriff, the schools superintendent, Michael Grego, said the district would be sticking with police and trained “school security officers” previously recruited.

In Polk county, which has a similar number of students, the sheriff, Grady Judd – an outspoken proponent of arming teachers – was rebuffed by the superintendent Jacqueline Byrd who said none of her district’s 150 schools would have guns in the classroom.

The Guardian found the situation mirrored in county after county across the state. For example in Duval, another top ten district with almost 130,000 students, the school board passed a resolution in March 2018 saying it “does not support deputising or otherwise arming school personnel”.

“This remains the board’s position. Our school safety plan enables the district to provide a strong security presence without arming teachers and other school staff whose primary job responsibilities relate to education and school management,” the Duval schools spokeswoman Laureen Ricks said.

It was not until Florida’s 27th-most populated school district, Bay county with only 28,000 students, that the Guardian found school leaders publicly supportive. “We’re excited about it,” the schools safety and security chief Mike Jones told reporters in March. “I’m 100% in favor. It’s a chance to put more armed people on our campuses to combat these guys.”

Opponents of the law, however, take little comfort that so many school districts have come out against it.

“I would love to say it’s encouraging that the majority of our students won’t be in harm’s way, however it will be the rural school districts that will suffer the most,” said Gay Valimont, the volunteer leader of the Florida chapter of Moms Demand Action for Gun Sense in America. “We’re here to save the most lives and even if it’s putting [just] a fraction of our children in danger then it’s an ill-conceived bill.

The sponsor of the bill, the Florida senate president, Bill Galvano, insisted the aim was only to offer school districts another option to meet the MSD safety act’s requirement of at least one armed “safe-school officer” on campus, and not to place teachers with guns into classrooms.

“The bill does not mandate any employees or teachers to volunteer… [and] a district that chooses to participate in the guardian program can choose to prohibit its classroom teachers from volunteering to participate.”

All volunteers, he said, would have to pass background and psychological screening and all training and testing requirements to the county sheriff’s satisfaction to become certified.

How Florida school districts are responding:

Not a part of the guardian program and will not allow teachers to carry guns. “Safety and security shall be provided by law enforcement, not teachers,” said the superintendent Alberto Carvalho.

Opted in to the guardian program after the MSD shooting but passed a resolution in March 2018 rejecting arming teachers. “We want our schools to be safe places of teaching and learning,” said the superintendent Robert Runcie.

School board voted unanimously in February to reject arming teachers if law passed, despite being in the guardian program. “Teachers are meant to be educators, not law enforcement,” said the school board member Cindy Stuart.

School board preempted law by voting 8-0 in March to say no to arming teachers, having already opted out of the guardian program. “I’m a gun owner but there’s a big difference between home and school,” said the board member Melissa Byrd.

Members of school board voted in April 2018 not to join the guardian program and instead used $10m of state money to help fund armed law enforcement personnel in every school and improve student access to mental health care."