Why Did Four Top Democrats Just Say No to 2020? - The New York Times 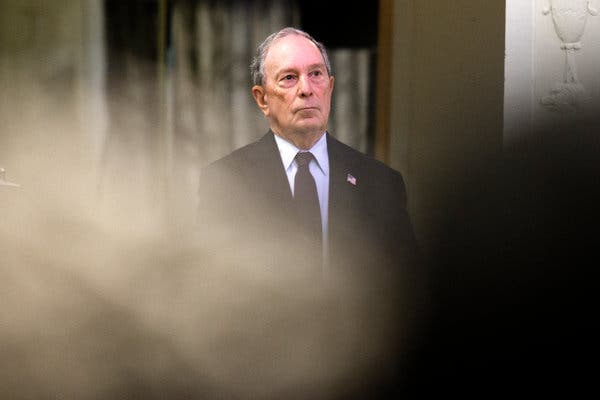 "Call them the announcements that weren’t.

Over the past two days, Michael R. Bloomberg, the former New York City mayor; Eric H. Holder Jr., the former United States attorney general; and Senator Jeff Merkley of Oregon officially declared … drumroll, please … that they would not be running for president in 2020. A fourth Democrat, Hillary Clinton, also said “I’m not running” to a New York City television station.

Such is the state of Democratic fervor to challenge President Trump that the party now has a subset of politicians: the almost-rans.

Mr. Bloomberg said he felt his time and personal fortune would be better used promoting immigration reform, gun control and climate change. Mr. Holder wants to continue focusing on ending gerrymandering. Mrs. Clinton, who never seriously pursued a third primary bid, said she would keep “standing up for what I believe.” And Mr. Merkley will seek a third term in the Senate in 2020, after the State Legislature rejected his request to allow him to run for both positions simultaneously.

[Make sense of the people, issues and ideas shaping American politics with our newsletter.]

“I have felt like I’m sitting on a fence, and I’m getting really uncomfortable sitting on those pickets,” said Mr. Merkley in an interview. “At some point, you just have to say, ‘O.K., I’ve weighed it and reweighed and here’s the right thing to do.’”

But there are also other challenges and obstacles facing potential 2020 candidates right now.

There are already 14 Democrats running for president, and there is a good chance that a 15th one could enter in the coming weeks: former Vice President Joseph R. Biden Jr., who would take up a significant share of the ever-thinning oxygen in the packed race. Another big name, former Representative Beto O’Rourke, is also expected to announce his presidential intentions soon.

Mr. Biden and Mr. O’Rourke would add enormous pressure to the competition among the candidates for aides, donations, volunteers, media attention and voter support. The primary race has already created at least one star, with Senator Kamala Harris, of California, attracting enthusiastic admirers who regularly express the hope that they are witnessing the party’s “next Obama.” While the four Democrats who just said no to 2020 did not appear intimidated by a Harris, Biden or O’Rourke candidacy, building an organization and commanding attention only gets harder amid multiple star candidates.

There’s also the looming deadline of March 31, when candidates must report their first quarter finances to the Federal Election Commission. Those returns will be scrutinized as an early show of relative strength — or weakness — in the race.

Candidates who can self-finance their campaigns, like Mr. Bloomberg, would still face a fierce competition to be heard, not only among others in the race but amid intensifying efforts by Democrats on Capitol Hill to investigate the Trump administration.

Even the first Democratic debate in June doesn’t hold the promise of much airtime: Depending on how many candidates qualify, the event could become a two-night affair, with candidates assigned a spot based on a random drawing.

It didn’t go unnoticed by Mr. Bloomberg that he was the last billionaire considering a bid for the Democratic nomination. Tom Steyer, the California liberal activist, opted against running earlier this year, and if the former Starbucks chief executive Howard Schultz runs, he has said he would do so as an independent.

Eric H. Holder Jr., the former attorney general, said he wants to focus on his efforts to end gerrymandering.

Photo by: Krista Schlueter for The New York Times

“I believe I would defeat Donald Trump in a general election,” Mr. Bloomberg wrote in a column published Tuesday. “But I am cleareyed about the difficulty of winning the Democratic nomination in such a crowded field.”

Populist progressives like Senators Bernie Sanders and Elizabeth Warren have made combating the influence of money in politics a core message of their presidential candidacies — arguments that might have proved challenging for Mr. Bloomberg, whose aides said he would spend at least $500 million of his own fortune to defeat President Trump in 2020.

Mr. Bloomberg’s moderate, pro-business record and generally favorable view of Wall Street would likely also have posed problems in a party that has shifted left on economic issues like taxing the rich and regulating big banks. Some of those arguments could have posed challenges for Mrs. Clinton, too, who spent decades cultivating a network of high-dollar donors and close relationships with Wall Street to fund her campaigns.

Democrats lost more than 1,000 seats in state legislatures and governorships during President Barack Obama’s two terms in the Oval Office, and those defeats found increased scrutiny once Mr. Trump ascended into the presidency and the Democrats held diminished political power.

In the three years since, grass-roots organizations and Democratic Party leaders have pledged to take recruitment and support for nonpresidential races more seriously, leading some candidates who had considered a run for president to look further down the ticket. In Mr. Merkley’s video announcing that he would not run, he said, “We need both strong leadership in the Oval Office and strong leadership in the Senate,” a sentiment that was met with applause on social media. Stacey Abrams, the Georgia Democrat who lost her bid for governor in 2018, is being heavily recruited for another statewide race in Georgia. . Mr. O’Rourke, the charismatic Texas Democrat who is expected to run for president after losing a Senate bid in 2018, has also faced several calls to focus his energy at home.

[Who’s in? Who’s out? Keep up with the Democratic field with our candidate tracker.]

Jeff Hauser, of the Center for Economic and Policy Research in Washington, tweeted that other Democrats should take a page from Mr. Merkley’s “principled and realistic playbook” and run for Senate. “We need to address the climate crisis, confirm judges & Justices, and in general begin the process of De-Trumpification,” he wrote.

Senator Jeff Merkley will run for re-election in 2020. Oregon’s State Legislature rejected his request to allow him to run for both president and Senate simultaneously.

Mr. Bloomberg’s non-announcement announcement included plans to invest further in climate activism, which is another way Democrats are choosing to focus on the party’s overall health. Mr. Steyer decided he would instead put his money behind efforts to impeach Mr. Trump.

Both Mr. Steyer and Mr. Bloomberg said that, unlike Mr. Schultz, they would not consider a third-party run, which could risk helping Mr. Trump win re-election by siphoning votes from the Democratic candidate.

Another thing the four non-candidates have in common: They all represent the back end of a rapidly changing Democratic Party.

After their defeat in the 2016 presidential election, a more liberal, more uncompromising wing of the party begin to emerge, desperate to throw off the institutional connections to more centrist figures like the Clintons and Mr. Obama. It was this wing that has helped move presidential candidates further to the left, pushing them to embrace policies like “Medicare for all,” the Green New Deal and the rejection of corporate PAC money.

The new crop of Democrats are also more keen to talk about the importance of a candidate’s identity, particularly millennials and nonwhite activists who are driving grass-roots changes among Democrats — “Anybody But a White Guy 2020,” reads a popular sign at presidential rallies. And youth-led social movements about sexual harassment, racial justice, and gun control in recent years have forced Democrats to answer uncomfortable questions about the lack of equitable representation among their caucus in terms of race, gender, and class.

Figures such as Mrs. Clinton, Mr. Bloomberg and Mr. Holder would have been an ideological mismatch for this emerging leftist voice. Mrs. Clinton already struggled to appease the party’s left flank during her 2016 run, and the litmus test issues have only moved further from her core policy center since. Social justice activists were raring to challenge Mr. Holder on his record on police reform as head of Department of Justice.

Even Mr. Sanders seemed caught off guard during a recent appearance on The Breakfast Club, the urban radio show targeted to millennials, when a host asked him, “Do we need another white guy as president?”