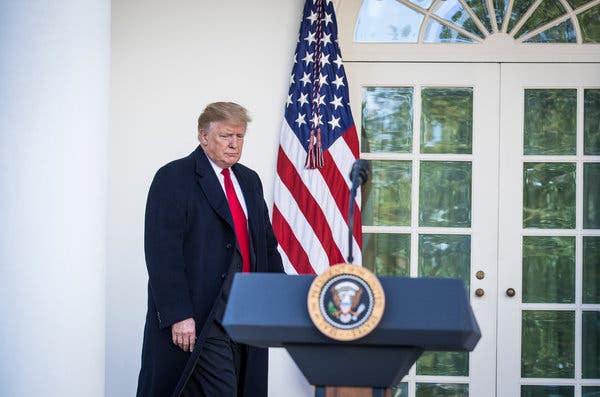 It revealed the folly of the president’s approach to politics.

President Trump announced a temporary end to the government shutdown on Friday.

What a debacle President Trump’s shutdown proved to be — what a toddler’s pageant of foot-stomping and incompetence, of vainglory and self-defeat. Mr. Trump tormented public servants and citizens and wounded the country, and, in conceding on Friday after holding the government hostage for 35 days, could claim to have achieved nothing.

He succeeded only in exposing the emptiness of his bully’s bravado, of his “I alone can fix it” posturing. Once upon a time, Mr. Trump promised that Mexico would pay for a wall. He instead made all Americans pay for a partisan fantasy.

Maybe you want a wall. Can you possibly argue that Mr. Trump’s shutdown strategy advanced your cause? He made the right decision on Friday — to sign a bill reopening the government through Feb. 15, giving lawmakers time to reach a permanent deal. But he could have had this same outcome without a shutdown. He ultimately agreed to the sort of bill that Democrats have been pitching for weeks — one that contains not one dollar in wall funding.

In his announcement, the president struggled to obscure his failure with yet another rambling infomercial about the glory of walls. “No matter where you go, they work,” he said (raising the question of how you can get there if, in fact, there’s a wall in your way). He had nothing of substance to offer beyond the usual specious claims that only his wall can end the border flood of drugs, crime and migrant women who have been duct-taped and stuffed into vans by human traffickers. To repeat: Fewer border-crossing apprehensions were made in 2017 than at any time since 1971; drugs are overwhelmingly smuggled through established points of entry; and the only crisis at the border is a humanitarian one, of people fleeing violence and seeking asylum — again, mostly at established points of entry — under international law.

There is nothing to celebrate about this sorry shutdown, though it’s perhaps understandable that congressional Democrats were reveling in Mr. Trump’s collapse. Members of Mr. Trump’s conservative fan base demonstrated that, even if the president continues to insist on alternative facts, they are capable of acknowledging that truth.

Within minutes of the announcement, the bomb-throwing pundit Ann Coulter — among those credited with having scolded Mr. Trump into rejecting the temporary funding bill passed by the Senate last month — tweeted her judgment:

“Good news for George Herbert Walker Bush: As of today, he is no longer the biggest wimp ever to serve as President of the United States.”

The president tried to stand tough for Ms. Coulter and her ilk. Even as federal workers lined up at food banks, sought unemployment benefits and took backup gigs driving for Uber, he insisted he would not give an inch. He stormed out of meetings with Democratic leaders. He indulged in a public spat with House Speaker Nancy Pelosi over his State of the Union address. He tweeted angrily. On Thursday, he was still vowing, “We will not cave!”

But on Friday he caved. With a growing number of overworked, stressed-out air traffic controllers calling in sick, staffing shortages at two airports on the East Coast began to snarl air travel. The spectacle of enraged travelers, canceled flights and imperiled safety turned up the heat on the White House and Congress.

Republican lawmakers were already in a foul mood. On Thursday, the Senate voted on, and failed to pass, two competing plans for reopening the government. Afterward, there were reports of sniping and finger-pointing within the Republican conference.

Along with their concerns about the human cost of the shutdown, Republicans were no doubt antsy about the negative impact the shutdown was having on their president’s public standing. Polls consistently showed that most Americans did not support the shutdown and that most blamed Mr. Trump for it. An ABC poll released this week put Mr. Trump’s approval rating at 37 percent and showed him to have the lowest two-year average approval of any president in the past seven decades. Perhaps he noticed that a poll released on Wednesday found that 59 percent of Americans thought he cared little about their problems.

On top of all that, the Russia investigation hit the headlines again, when, in a predawn raid on Friday, F.B.I. agents — working without pay — arrested Roger Stone, a longtime adviser to Mr. Trump. Mr. Stone has been indicted on seven counts related to Russia’s meddling in the 2016 election, including witness tampering, obstruction and making false statements.

It was, in short, shaping up to be a very bad day for the president, who really cannot be blamed for wanting to change the story line.

Of course, the new narrative — that Mr. Trump got owned by Ms. Pelosi — isn’t likely to sit well with him, either. And who knows what he’ll do next to try to salve his ego, and salvage some political capital with the minority of Americans who still seem inclined to support him.

In his Friday remarks, Mr. Trump made threatening noises about declaring a national emergency if Congress cannot reach a compromise by the time this agreement expires. Polls suggest that such a move would be wildly unpopular, causing the president and his party even more grief. Maybe that danger will motivate congressional Republicans to hammer out a deal without him.

Here’s hoping that this mess leaves Mr. Trump with a vital lesson — even if he doesn’t care about a functional government, the rest of America does."

Opinion | Trump’s Shutdown Was a Cruel Joke - The New York Times
Posted by John H Armwood II at 6:29 AM