Do New York prosecutors pose the greatest threat to Donald Trump? | US news | The Guardian 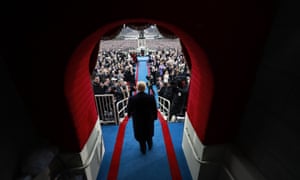 The bigger threat to Trump, however, may have just walked up and tapped him on the shoulder.

Trump did not tweet about or otherwise acknowledge the revelation on Monday night that prosecutors from the US attorney’s office for the southern district of New York (SDNY) had issued a subpoena seeking a mountain of documents from his inaugural committee.

But former prosecutors and others familiar with the Manhattan-based prosecutors’ work allowed their jaws to drop at the news of the subpoena or – in the case of former SDNY chief Preet Bharara, whom Trump fired early on – their virtual eyes to bulge.

On Friday, ProPublica and WNYC reported further eye-popping news: that the inaugural committee paid the Trump International hotel in Washington a rate of $175,000 a day for event space.

The implications of the subpoena and what followed were clear,and they were all bad for Trump, worse even than the threat posed by the special counsel’s investigation of ties between his campaign and Russia, said the former New Jersey governor Chris Christie, an erstwhile member of Trump’s inner circle, once in charge of transition planning, and a former US attorney himself.

“I’ve always thought that was the much more problematic thing,” Christie told MSNBC of SDNY. “People are focused on Mueller and that’s appropriate. But people should not take their eye off the ball.”

In interviews with the Guardian, former SDNY prosecutors spelled out why investigations run out of New York of Trump-linked interests could dog the president, his family and his associates for years, including after his departure from office.

The SDNY is also full of lawyers who are known for being talented, independent and feisty. Alumni regularly go on to judicial appointments, top corporate posts, top justice department jobs (for example, FBI directors James Comey and Louis Freeh, attorney general Michael Mukasey) and other prominent work (Rudy Giuliani, once New York mayor, now the president’s lawyer). Wags refer to the office as the “sovereign” district of New York and joke that it’s the only US attorney’s office, of 93 nationwide, to have its own foreign policy.

“Both in terms of courtroom skill and particularly with respect to investigative and legal acumen, the southern district has long prided itself on the firepower it brings to its cases,” said the Columbia University law professor Daniel Richman, a former assistant attorney in the district.

Elie Honig, who helped dismantle the Sicilian mafia as a prosecutor with the district, echoed the observation.

“The southern district has a long history,” he said, “and a reputation, I think well deserved, of being tenacious and always seeking to take an investigation wherever it goes, including to the top of an organization.”

Owing to its location in Manhattan – a global intersection for business, finance, terrorist plots and organized crime – the SDNY, which celebrated its 225th birthday in 2014, has deep experience in prosecuting the most complicated and significant cases. Those include the first World Trade Center bombing in 1993, work related to the 9/11 attacks of 2001, the 1988 bombings of US embassies in Africa, organized crime and mafia cases, the Ponzi schemer Bernie Madoff and major financial crimes and public corruption cases.

The Manhattan location also makes the SDNY a prime venue for prosecuting entities tied to Trump, potentially including his business, his campaign, his inaugural committee and more, said Harry Sandick, a former assistant US attorney in the district.

“Since the Trump Organization is located in New York, since many of Trump’s advisers and business partners are also located in New York and took actions in New York,” he said, “they have the ability in the US attorney’s office to look at essentially any crime that they believe may have been committed. And they can just move from one subject to another to another as they find connections.”

So far as is publicly known, the SDNY was first brought in on a Trump-related prosecution with a referral from Mueller of evidence of crimes committed by Michael Cohen, Trump’s former lawyer. The SDNY directed a raid on Cohen’s apartment and office last April, seizing documents and devices. Cohen pleaded guilty in August to violating campaign finance laws, bank fraud and criminal tax evasion, and is scheduled to begin a three-year prison sentence next month.

The Cohen case may have given rise to the investigation of the Trump inaugural committee, which prosecutors are investigating for alleged conspiracy against the US, false statements, mail fraud, wire fraud, money laundering, inaugural committee disclosure violations, and laws prohibiting contributions by foreign countries.

“The inaugural investigation seems important,” said Sandick. “People have long wondered why they raised more than $100m, which is twice what was raised for prior inaugurations.”

But in a sign of how extensively prosecutors have penetrated Trump’s network – and of how saturated that network is with alleged criminal conduct – the inaugural committee investigation may have a different primary source: the testimony of the former Trump aide Rick Gates, who is cooperating with prosecutors after pleading guilty last year to conspiracy and lying to the FBI. Gates was deputy chairman of Trump’s inaugural committee.

“They’re gathering large amounts of data,” said Richman of the SDNY team. “They are speaking to a broad array of witnesses, some who have already been implicated, some who are just witnesses. And I would suspect they have adequate people on the case, both at the agent and the prosecutor level, to pursue all directions.”

Prosecutors will have to make a judgment call about what potential cases to bring, said Sandick, adding: “When I was in that office, we were always taught that sometimes the most important cases you have are the ones you don’t indict. Because you made a decision that the evidence wasn’t there.

“These are professional prosecutors, it’s not an inquisition.”

The threat of a presidential move against the district, or a similar move out of the justice department, is not likely to deter SDNY, Honig said.

Do New York prosecutors pose the greatest threat to Donald Trump? | US news | The Guardian
Posted by John H Armwood II at 10:12 AM