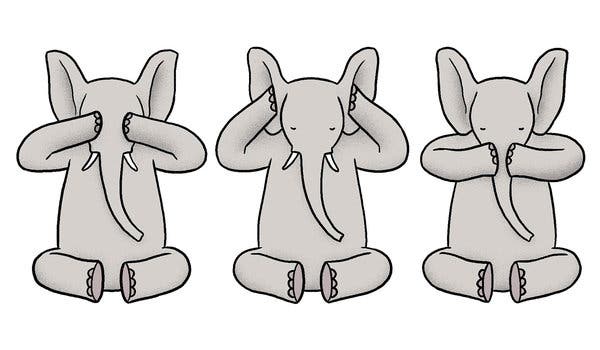 "Americans deserve to know what the president and Vladimir Putin are talking about.

If, beleaguered or bemused by the onrush of scandal and political antics, you’re searching for some index of just how truly not-normal American governance has become, you might consider this: Standing on the White House lawn on Monday morning, his own government shut down around him, the president of the United States was asked by reporters if he was working for Russia.

He said that he was not. “Not only did I never work for Russia, I think it's a disgrace that you even asked that question, because it's a whole big fat hoax,” President Trump said.

Yet the reporters were right to ask, given Mr. Trump’s bizarre pattern of behavior toward a Russian regime that the Republican Party quite recently regarded as America’s chief rival. Indeed, it’s unnerving that more people — particularly in the leadership of the Republican Party — aren’t alarmed by Mr. Trump’s secretive communications with the Russian president, Vladimir Putin, and reliance on his word over the conclusions of American intelligence agencies.

The Times reported last week that the F.B.I. started a counterintelligence investigation into Mr. Trump in 2017 after he fired James Comey, the bureau’s director, to determine whether Russia had influenced him. The Washington Post reported over the weekend that the president has concealed details about his meetings with Mr. Putin even from officials of his own administration — going so far, on at least one occasion, as to confiscate his interpreter's notes.

These revelations joined a long list of suspicious incidents and connections between Mr. Trump and the Russian government.

The Russian government interfered in the 2016 election in order to get Mr. Trump elected, of course. America’s intelligence community agrees on that. The special counsel, Robert Mueller, is examining what happened before and after Election Day between the campaign and Mr. Putin’s government.

But Mr. Trump’s behavior simply since he’s been in office hasn’t given any peace of mind even to those willing to give him the benefit of the doubt — at least, those outside the Republican leadership.

In the past month, the president announced that American troops would pull out of the conflict in Syria, something that the Russians have long called for. Mr. Trump subsequently said the Soviet Union was right to invade Afghanistan in 1979, parroting Russian revisionist history by claiming it was seeking to quell terrorism.

This month, it was revealed that federal prosecutors had accused Mr. Trump’s former campaign chief Paul Manafort of sharing political polling data in 2016 with an associate linked to Russian intelligence, the most direct evidence to date that the campaign may have tried to coordinate with Russia.

Meanwhile, the Treasury Department is pushing to end sanctions against companies owned by Oleg Deripaska, an oligarch closely tied to Mr. Putin. Those sanctions were put in place in 2018 in retaliation for Russian meddling with the election.

Despite Mr. Trump’s insistence that he has been “much tougher on Russia” than previous presidents, he sure has a strange way of showing it. Throughout his time in the White House Mr. Trump has praised leaders aligned with Mr. Putin, like Marine Le Pen in France and Viktor Orban in Hungary. He has praised Mr. Putin outright.

At the same time, the president has fired broadside after broadside at the twin pillars of stability in Western Europe: the European Union and NATO. He reportedly suggested that France leave the bloc and repeatedly called into question whether the United States would stand by its commitments to the military alliance. Weakening Western unity, as evidenced by those organizations, has long animated Russian foreign policy.

Some of these moves are consistent with Mr. Trump’s isolationism and pronounced yen for authoritarians, and perhaps also with his demonstrated ignorance of history.

It’s harder to come up with a rational excuse for Mr. Trump’s secrecy about his dealings with Mr. Putin, or for why, in 2017, he shared highly classified information from Israel with the Russian foreign minister in a meeting in the Oval Office while also boasting about relieving heat from the investigation into his possible Russia ties by firing the F.B.I. director. Mr. Trump has also sided with Mr. Putin and against the conclusions of American intelligence agencies by denying that the Russian government tampered with the election.

While Mr. Trump has plenty of kind words for a foreign leader who doesn’t have America’s best interests at heart, he seems to be willing to heap no end of abuse on his fellow Americans, particularly those in the F.B.I. and the Justice Department who have sworn to support and defend the Constitution against all enemies, foreign and domestic.

On Monday, Mr. Trump lashed out at F.B.I. agents for opening the counterintelligence investigation against him, calling them “known scoundrels.”

With the House of Representatives newly under Democratic control, Mr. Trump might finally receive meaningful oversight that could help either uncover wrongdoing or put Americans’ minds at ease about their president.

On Sunday, the new Democratic chairman of the House Intelligence Committee, Adam Schiff, urged his Republican colleagues to back his effort to obtain notes or testimony from the interpreter present at the meetings between Mr. Putin and Mr. Trump.

“Shouldn’t we find out whether our president is really putting ‘America first?’” Mr. Schiff tweeted.

This is not a new or unexplored possibility, even among Republicans at one time.

“There’s two people I think Putin pays: Rohrabacher and Trump,” Kevin McCarthy, who was then House majority leader, told his fellow Republicans at a closed-door meeting, The Washington Post first reported, shortly before Mr. Trump won his party’s nomination for the White House in 2016.

Dana Rohrabacher, a 15-term congressman from California who lost his bid for re-election in November, was such a staunch supporter of Moscow on Capitol Hill that the F.B.I. concluded that Russian spies were trying to recruit him.

Mr. McCarthy said later that his line about Mr. Trump being paid by Moscow was a quip that landed flat.

What’s no laughing matter is the unwillingness of the Republican Party to cast a critical eye upon a sitting president who has so flouted accepted practice for dealing with any foreign leader — not to mention one as adversarial as Vladimir Putin."