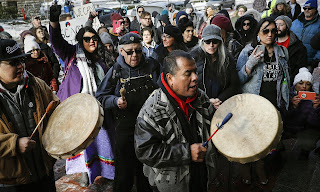 Opinions diverge – along ideological lines, of course – on whether full-length video of the scene cast the students’ conduct in a different light. The video does capture a moment in which a student takes off his shirt and leads his classmates in a chant, which they heartily join, in the style of a football cheer, or a Trump campaign rally.
“In this case the facts happened to support the rightwing tribe,” wrote the conservative New York Times columnist David Brooks.
On the contrary, wrote Josh Marshall of Talking Points Memo, watching every available video “doesn’t greatly change the substance of what you see on the video, which is a middle aged Native American activist/elder beating a ceremonial drum in the face of what appears to be a bemused and cocky teenager while his classmates surrounding them, mostly wearing Maga caps, jeer and taunt the man with chopping motions.”
Maga: Make America Great Again. The northern Kentucky county where Covington Catholic is located voted for Trump by a 26-point margin. It is also in the heart of a region on the radar of the Southern Poverty Law Center for its proliferation of hate groups, including white supremacist and radical Christian identity groups.
New video sheds more light on students' confrontation with Native American Read more After originally censuring the students and vowing consequences, Covington has in recent days deployed media surrogates to defend itself, to argue that the students were not at fault, and their actions on video had been misunderstood.
In a strong indicator of the political undertones of the argument taking shape, the school’s public relations firm is closely tied to Mitch McConnell, the senate majority leader from Kentucky, noted Democratic strategist Adam Parkhomenko.
Controversy over students mocking Native American strikes national chord | US news | The Guardian: