Too Old to Be a Freshman in Congress? Donna Shalala Doesn’t Care - The New York Times 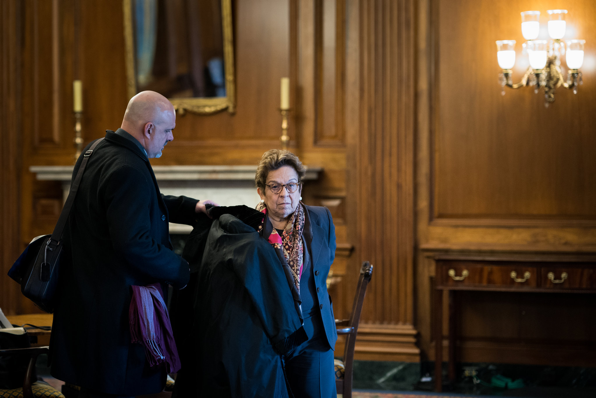 The woman who signed my college degree at Hunter, CUNY.

"WASHINGTON — The Georgetown waterfront apartment where Donna Shalala has spent part of the last two decades is half sanctuary, half résumé.

There is a signed photo of Madeleine Albright, the former secretary of state, walking with Ms. Shalala when both were in Bill Clinton’s cabinet. A gold coffee table is adorned with the visages of the kings of Persia, a reminder of her time in pre-revolutionary Iran as a Peace Corps volunteer. Against a bookshelf a set of golf clubs rests in a bag emblazoned with the trademark orange and green “U” from the University of Miami, the 17,000-student private institution where she was president until 2015.

The shoulder bag left on a chair by the door with a different seal — the House of Representatives — seems like a bit of a letdown. But nevertheless, as she will repeatedly tell you, Ms. Shalala is excited for the next chapter in a career spanning decades: backbench freshman.

Taking office a little over a month before her 78th birthday, Ms. Shalala, who once presided over a sprawling bureaucracy and budget as secretary of health and human services, will take on a new role: the oldest freshman in her class and one of the oldest true freshmen in congressional history. (Representative James Bowler of Illinois, elected at 78 in 1953, still maintains the distinction of being the oldest first-term freshman.)
Under the circumstances of the moment, her greatest strength — being historically old and experienced in a historically young and diverse freshman class — could become a huge liability.

“Do they see her skill set as an asset or is she sort of dismissed as the old guard who’s out of touch with how the world is now?” asked Scott Klug, a former Wisconsin Republican representative who introduced Ms. Shalala at her 1992 cabinet confirmation hearing. He answered, “Donna, just by the force of her personality, will have a presence.”
Ms. Shalala with Hillary Clinton in 1994. Ms. Shalala’s affiliation with the Clintons could be a challenge in a younger, more diverse Democratic Party.Charles Tasnadi/Associated Press

Ms. Shalala with Hillary Clinton in 1994. Ms. Shalala’s affiliation with the Clintons could be a challenge in a younger, more diverse Democratic Party.Charles Tasnadi/Associated Press
In a freshman class where some first-time candidates may be reluctant to transition to governing, Ms. Shalala is unlikely to Instagram her way through office, like Representative-elect Alexandria Ocasio-Cortez of New York, or joust with Twitter trolls the way Representative-elect Ilhan Omar of Minnesota does. (She does maintain accounts on both platforms.)

The newcomers may come to value the woman nicknamed Hurricane Donna, who wrestled with a Republican Congress and spent years testifying before the senior lawmakers she now calls colleagues. But in the meantime, the adjustment could well be brutal for someone who has led staffs of thousands and controlled budgets of millions, or even billions.

“She’ll be the chief executive of her congressional office, but that is all,” Representative Ileana Ros-Lehtinen, the retiring Republican whose South Florida seat Ms. Shalala is taking. She spent time meeting with Ms. Shalala during the transition to help her adjust. “I want her to understand that she’s used to being the chief, and Congress puts you in your place.”
Ms. Shalala, who weathered a surprisingly competitive primary challenge and general election race, understands the persistent disbelief from both Republicans and Democrats over her decision to run. (“I got pissed off,” she says, watching President Trump doing something — she can’t remember what, but something — on TV.)

And she concedes that her new junior status will be a challenge.

“In my head, I assume it’s a new job, and I’ve got to be careful about not bringing the last job or the last experience to it,” she said, standing in her kitchen with a cup of black coffee.

Ms. Shalala does have some challenges in a Democratic Party that is younger, more diverse and more liberal than Mr. Clinton’s. She must communicate with her district’s significant Hispanic population without fluency in Spanish. As president of the University of Miami, she clashed with custodial workers striking over low pay, though she later earned the support of union workers during the campaign. She enraged Miami environmentalists by selling sensitive and protected land, a decision she insists was within her jurisdiction as university president.

There is the one where she thwarted a robbery by curling her already small five-foot frame into a fetal position and screaming. Or there are the days from her Little League softball career under the guidance of George Steinbrenner, the longtime owner of the New York Yankees. (Ms. Shalala said she recently accepted an invitation to join the congressional women’s softball team, likely setting another age-related record.)

Her freshman classmates have been learning about her by, among other things, revisiting their memories of Ms. Shalala’s tenure during Mr. Clinton’s impeachment, including recollections of her confrontation with Mr. Clinton over his affair with Monica Lewinsky.
“She’s smart; she knows the game,” said Representative-elect Deb Haaland of New Mexico, who said she considers Ms. Shalala a mentor. “It’s not about age. It’s about strength, humanity — it’s about willingness to step up and fight.”

Almost forgotten are the opening days of the Clinton administration, when the right deemed Ms. Shalala “the farthest to the left and most controversial” of the Clinton cabinet nominees.

Decades later, Ms. Shalala acknowledges that in this freshman class, she is more centrist than leftist — and on the other side of the generational change she once advocated. She scoffs at the suggestion that she should have stepped aside for the next generation of Democrats.

“What am I stepping aside for? Do they have better ideas than I have?” she said. “The answer is, no.”

Too Old to Be a Freshman in Congress? Donna Shalala Doesn’t Care - The New York Times: