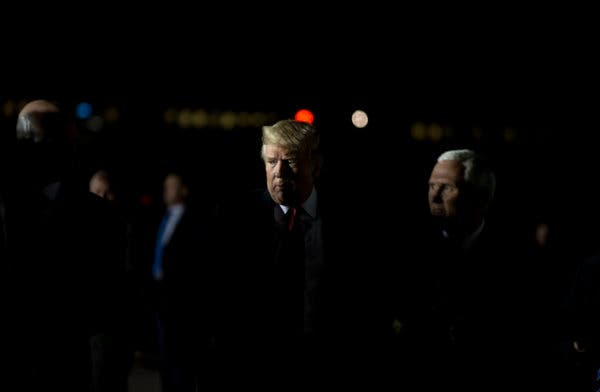 How can a family that can’t run a charity run a country?

Nearly every aspect of Trump’s life is now under investigation.

Photo by: Gabriella Demczuk for The New York Times

I will be going on book leave soon — today is my last column for a while because of the holiday schedule — to write what I believe to be the most important thing that I’ve ever written.

No, it’s not about Donald Trump, just in case you were wondering.

But since I have written almost exclusively about Trump for more than two years, please allow me this parting assessment: It is so much worse than I thought.

My original objections to Trump, the things that pushed me into the Resistance, were his immorality, dishonesty, fraudulence and grift.

I freely admit now that I was seeing only the pointy edge of an enormous machine. I had no idea how immoral Trump actually is.

The same month that Trump pulled the outrageous stunt of inviting women who had accused Bill Clinton of inappropriate sexual behavior to his debate with Hillary Clinton, his personal lawyer, Michael Cohen, apparently under his instructions, facilitated a $130,000 payment to the porn star Stormy Daniels to prevent her from telling America that she had a sexual encounter with Trump, who was married with a small child. This payment was a few months after Cohen had helped arrange a $150,000 deal between American Media Inc., the parent company of The National Enquirer, to buy the story of the Playboy model Karen McDougal, who also claimed a sexual relationship with Trump.

According to prosecutors, both were campaign finance violations — federal crimes — and now a judge has sentenced Cohen to three years in prison for that and other crimes.

The fact that Trump would be directly implicated in a federal crime that took place on the verge of the election and may have helped hand that election to him is mind-blowing to me.

Trump, for his part, lied about these payments and denied them — while also having those around him lie about them on his behalf — until he could simply no longer lie about them anymore. Then came the roulette wheel of revolving explanations that makes one dizzy because of their silliness.

Just this week, the Trump Foundation agreed to dissolve under pressure from the New York attorney general, who found that the foundation functioned “as little more than a checkbook to serve Mr. Trump’s business and political interests” and engaged in “a shocking pattern of illegality,” including coordinating with Trump’s presidential campaign.

How can a family that can’t run a charity run a country?

But of course, that is not all. Nearly every aspect of Trump’s life is now under investigation for wrongdoing, something I could not have foreseen.

I could not have predicted the extraordinary lengths to which the president would go to obstruct justice and undermine the rule of law, nor that he would do these things in full view, for everyone to see.

I could not have predicted, when I first wrote that Trump was a pathological liar, that his rate of lying would increase with his time in office, rather than decrease. As The Washington Post Fact Checker put it in September:

“Trump’s tsunami of untruths helped push the count in The Fact Checker’s database past 5,000 on the 601st day of his presidency. That’s an average of 8.3 Trumpian claims a day, but in the past nine days — since our last update — the president has averaged 32 claims a day. When we first started this project for the president’s first 100 days, he averaged 4.9 claims a day. He passed the 2,000 mark on Jan. 10 — eight months ago.”

Just this month, the newspaper’s Fact Checker was forced to create a new category of lying just for the Trump era: the “Bottomless Pinocchio” for “when a politician refuses to drop a claim that has been fact checked as three or four Pinocchios, keeps saying it over and over and over again, so that it basically becomes disinformation, propaganda.”

I could not have predicted the overwhelming number of contacts that would have existed between people in Trump’s orbit and the Russians during the campaign, or the number of people who would take plea deals and ultimately be charged, indicted or convicted of lying about those contacts.

I couldn’t have predicted any of it, but here we are, and the president, his congressional backers and his citizen supporters are continuing to tell us that this doesn’t matter as much as we think, that this is a politically driven prosecution, that everyone does what Trump has done.

They are all wrong. This is huge, and the longer we pretend that it isn’t, the more damage we do to the health and stability of our own country.

While I am away, I will enjoy not having to follow the hourly insanities too closely, but every day I will worry about the republic in which we live. Trump has the capacity to damage or even destroy it. That’s not hyperbole. That’s an observation informed by a close reading of history."

Opinion | It Is So Much Worse Than I Thought - The New York Times
Posted by John H Armwood II at 6:48 AM