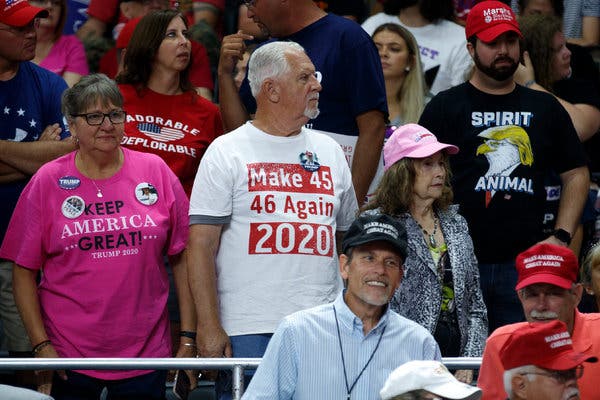 America doesn’t need a liberal Trump; it needs precisely the opposite of that.

"Make no mistake: The 2020 presidential race has already begun. It began before the ballots were fully counted from the midterms, and for some presidential hopefuls, it started even earlier.

People are already making the obligatory pilgrimages to Iowa and New Hampshire.

In fact, NBC10 Boston and New England Cable News have been tracking visits to New Hampshire by politicians who might run in 2020, and by their count, as of Nov. 13, Maryland Congressman John Delaney, who has already declared his candidacy and already has a campaign website, leads the pack with 35 visits (each city visited counts as a separate visit, even if it’s on the same day as another city).

As Politico reported in June, nine prospective candidates, including Senators Sanders and Elizabeth Warren, as well as former Vice President Joe Biden and the former Massachusetts governor, Deval Patrick, had met with Obama in one-on-one meetings.

Loyalists are prodding reluctant candidates and also-rans to enter the fray or return to it. Last week, Mark Penn, a pollster and adviser to Bill and Hillary Clinton in previous elections, co-wrote an opinion piece in The Wall Street Journal under the headline “Hillary Will Run Again.”

As the article put it:

Get ready for Hillary Clinton 4.0. More than 30 years in the making, this new version of Mrs. Clinton, when she runs for president in 2020, will come full circle — back to the universal-health-care-promoting progressive firebrand of 1994. True to her name, Mrs. Clinton will fight this out until the last dog dies. She won’t let a little thing like two stunning defeats stand in the way of her claim to the White House.

Other people are looking at another side of the field: Money. Donald Trump has already raised an unprecedented amount of money for his re-election bid. According to a report last month from the Center for Responsive Politics, “Since January 2017, Trump’s fund-raising efforts totaled $106 million, and the president finished September with nearly $47 million on hand.”

For comparison, the group pointed out how this outpaces Trump’s predecessors:

More than two dozen people are in the process of exploring campaigns to take out President Trump, but only a handful have the relationships with wealthy donors, significant personal wealth or small-dollar fund-raising apparatus to raise the early money needed to mount a traditional campaign. The early advantage goes to those who hail from wealthy states, with broad networks of donors, such as California and New York, and those who will start the race with a national brand and large email lists of supporters.

Five Thirty Eight last month lined up the people they said were “basically running right now” even if “some of them end up never launching full-blown campaigns.” Names on that list were:

Throngs are considering a candidacy. We understand the ambitions, but what about what the country actually needs?

We are in the middle of nothing short of an ideological civil war in this country. People’s interests, inclinations and sources of information are so divergent that they are diametrically opposed.

Not all of that can be healed, but some of it must be. We can’t continue with half the nation viewing the other half as enemies.

Yes, we need someone to restore truth, decency and decorum to the presidency, but we also need someone who can lead a post-Trump reconstruction of civil society in which those who are willing can walk away from Trumpism and back into a more normal political reality.

Welcoming back prodigal partisans, those who have excused or forgiven or even cheered hatred, misogyny, racism and division, is easier said than done, and requires a special caliber of leader. The natural inclination of many, somewhat understandably, is simply to be a tougher Trump than Trump, but that inevitably reduces the candidate and the country.

America doesn’t need a liberal Trump; it needs precisely the opposite of that. Before we in our parlor games settle on who has the best shot of winning, let’s examine our lists for the candidates who represent our best hope for restoration."

Opinion | Looking Forward to Reconstruction
Posted by John H Armwood II at 9:16 AM