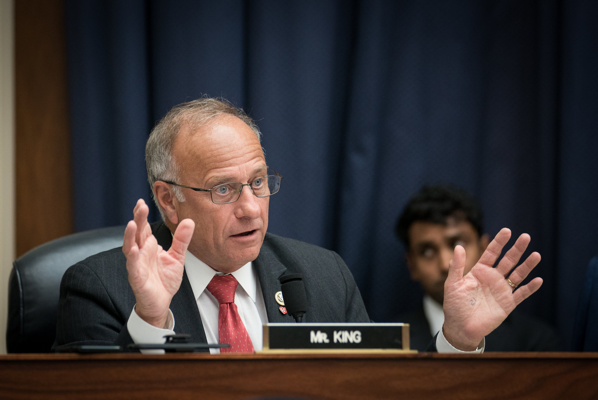 "Representative Steve King, Republican of Iowa, has made incendiary and racially charged comments for years.Erin Schaff for The New York Times
WASHINGTON — As Pittsburgh began burying the victims of Saturday’s synagogue massacre, the head of the House Republican campaign arm all but jettisoned Representative Steve King of Iowa from the House Republican Conference, declaring, “We must stand up against white supremacy and hate in all forms.”

The highly unusual rebuke by Representative Steve Stivers of Ohio, the chairman of the National Republican Congressional Committee, came a week before the midterm elections — but after years of incendiary and racially charged comments by Mr. King, capped in recent days by his endorsement of a white nationalist running for mayor of Toronto and a meeting with Austrian white nationalists, which he funded through a trip to visit concentration camps.

Mr. King is also locked in the toughest re-election fight of his eight-term House career.

“Congressman Steve King’s recent comments, actions, and retweets are completely inappropriate,” Mr. Stivers wrote on Twitter. “We must stand up against white supremacy and hate in all forms, and I strongly condemn this behavior.”

Mr. King fired back with a statement of his own, affirming that Americans of all races and “national origins-legal immigrants & natural born citizens” are created equal. He blamed attacks on him as “orchestrated by nasty, desperate, and dishonest fake news,” aided by complicit “Establishment Never Trumpers.”
The public censure is the latest downturn for Mr. King, whose lengthy history of making racially charged remarks has been subjected to closer scrutiny after the synagogue shooting in Pittsburgh. After liberal activists on social media lobbied some of Mr. King’s corporate donors to cut ties with the representative, the Midwestern dairy giant Land O’Lakes withdrew its support, saying in a statement that it wants its “contributions to be a positive force for good.”