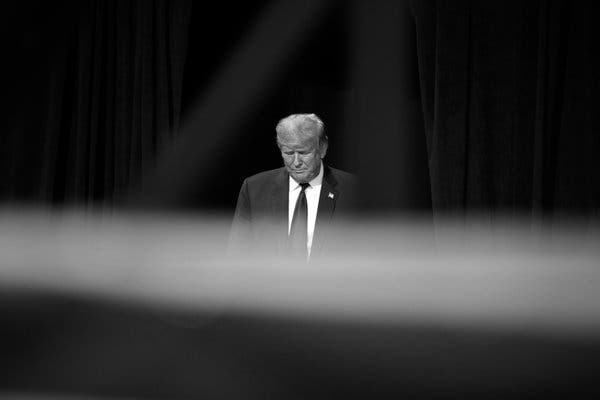 “I built what I built myself.”

This boast has long been at the core of the mythology of Donald Trump, Self-Made Billionaire. As the oft-told story goes, young Mr. Trump accepted a modest $1 million loan from his father, Fred, a moderately successful real estate developer from Queens, and — through smarts, hard work and sheer force of will — parlayed that loan into a multibillion-dollar global empire.

It’s a classic American tale of ambition and self-determination. Not Horatio Alger, exactly, but appealing, and impressive, nonetheless.

Except that, like so much of what Mr. Trump has been selling the American public in recent years, this origin story was a sham — a version of reality so elaborately embellished that it qualifies as fan fiction more than biography. Also, as we’ve come to expect from Mr. Trump, the creation of this myth involved a big dose of ethically sketchy, possibly even illegal activity.

As an in-depth investigation by The Times has revealed, Mr. Trump is only self-made if you don’t count the massive financial rewards he received from his father’s business beginning as a toddler. (By age 3, little Donald was reportedly pulling in an annual income of what today would be $200,000 a year.) These benefits included not only the usual perks of hailing from a rich, well-connected family — the connections, the access to credit, the built-in safety net. For the Trumps, it also involved direct cash gifts and tens of millions in “loans” that never charged interest or had to be repaid. Fred Trump even purchased several properties and business ventures, putting ownership either fully or partly in the names of his children, who reaped the profits.

As Donald Trump emerged as the favorite son, Fred made special deals and arrangements to increase Donald’s fortunes in particular. The Times found that, before Donald had turned 30, he had received close to $9 million from his father. Over the longer haul, he received upward of what, in today’s dollars, would be $413 million.

Along the way, it seems that certain liberties were taken with tax laws. The Times found that concocting elaborate schemes to avoid paying taxes on their father’s estate, including greatly understating the value of the family business, became an important pastime for Fred’s children, with Donald taking an active role in the effort. According to tax experts, the activities in question show a pattern of deception, a deliberate muddying of the financial waters. Asked for comment on The Times’s findings, a lawyer for the president provided a written statement denying any wrongdoing and asserting that, in fact, Mr. Trump had little to do with the dizzying transactions involving his family’s wealth.

Everyone can understand the impulse to polish one’s background in order to make a good impression. For Mr. Trump, whose entire life has been about branding and selling a certain type of gaudy glamour, this image-polishing has been all the more vital to his success. And he has pursued it with a shameless, at times giddy, abandon.

Veterans of New York news media still laugh to recall how Mr. Trump would call them up, pretending to be a publicist named John Barron, or sometimes John Miller, in order to regale them with tales of Mr. Trump’s glamorous personal life — how many models he was dating, which actresses were pursuing him, which celebrities he was hanging out with. As gross and tacky and bizarre as this all seemed, it was aimed squarely at fostering the image of Donald Trump as a master of the universe who, as the cliché goes, women wanted and men wanted to be.

This mythos was burnished and expanded by Mr. Trump’s years on “The Apprentice,” where he played the role of an all-powerful, all-knowing business god who could make or break the fortunes of those who clamored for his favor. Occasionally he could be harsh or even insulting, but it was always in the context of delivering the tough love that the contestants so needed to hear. And who was more qualified to deliver those lessons than Donald Trump? As with all reality TV, it was total bunk. But it promoted precisely the golden image that Mr. Trump — with a multimillion-dollar assist from his father — had carefully cultivated for his entire life.

With this glimpse into the inner workings of the Trump family finances, some of the grimier, ethically suspect aspects of Mr. Trump’s mythmaking begin to emerge — and with them, many questions about all that we still do not know about the man and his business empire. Seeing as how that empire and his role in building it are so central to who Mr. Trump claims to be — the defining feature of his heroic narrative — the American public has a right to some answers. For starters, now would be an excellent time for Mr. Trump to hand over those tax returns on which he has thus far kept a death grip.

In his 1987 memoir “The Art of the Deal,” Mr. Trump famously offered his take on the origins of his success: “I play to people’s fantasies. People may not always think big themselves, but they can still get very excited by those who do. That’s why a little hyperbole never hurts. People want to believe that something is the biggest and the greatest and the most spectacular. I call it truthful hyperbole. It’s an innocent form of exaggeration — and a very effective form of promotion.”

But increasingly, Mr. Trump’s willingness to bend the truth — and the rules — in the service of his myth looks less like innocent exaggeration than malicious deception, with a dollop of corruption tossed in for good measure. It’s not the golden, glittering success story he has been peddling. It’s shaping up to be something far darker."

Opinion | Donald Trump and the Self-Made Sham - The New York Times
Posted by John H Armwood II at 7:25 AM