Opinion | Donald and the Deadly Deniers - The New York Times 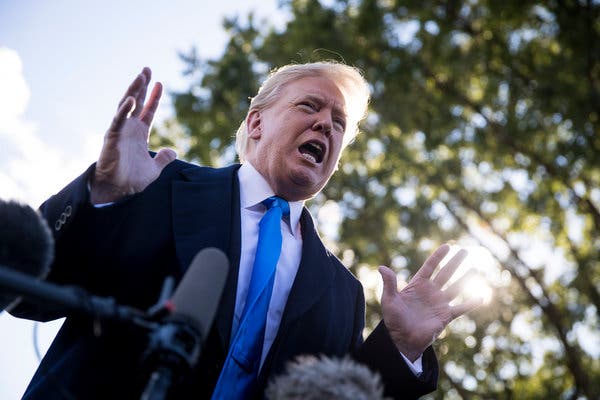 ""Climate change is a hoax.

Climate change is happening, but it’s not man-made.

Climate change is man-made, but doing anything about it would destroy jobs and kill economic growth.

These are the stages of climate denial. Or maybe it’s wrong to call them stages, since the deniers never really give up an argument, no matter how thoroughly it has been refuted by evidence. They’re better described as cockroach ideas — false claims you may think you’ve gotten rid of, but keep coming back.

Anyway, the Trump administration and its allies — put on the defensive by yet another deadly climate change-enhanced hurricane and an ominous United Nations report — have been making all of these bad arguments over the past few days. I’d say it was a shocking spectacle, except that it’s hard to get shocked these days. But it was a reminder that we’re now ruled by people who are willing to endanger civilization for the sake of political expediency, not to mention increased profits for their fossil-fuel friends.

About those cockroaches: Details aside, the very multiplicity of climate-denial arguments — the deniers’ story keeps changing, but the bottom line that we should do nothing remains the same — is a sign that the opponents of climate action are arguing in bad faith. They aren’t seriously trying to engage with the reality of climate change or the economics of reduced emissions; their goal is to keep polluters free to pollute as long as possible, and they’ll grab onto anything serving that goal.

Still, it’s worth pointing out how thoroughly all their arguments have collapsed in recent years.

These days, climate deniers seem to have temporarily backed down a bit on claims that nothing is happening. The old dodge of comparing temperatures to an unusually warm year in 1998 to deny that the planet is getting warmer — which is like comparing days in early July with a warm day in May, and denying that there’s such a thing as summer — has been undermined by a string of new temperature records. And massive tropical storms fed by a warming ocean have made the consequences of climate change increasingly visible to the public.

So the new strategy is to downplay what has happened. Climate change models “have not been very successful,” declared Larry Kudlow, the top White House economic adviser. Actually, they have: Global warming to date is well in line with past projections. “Something’s changing and it’ll change back again,” asserted Donald Trump on “60 Minutes,” based upon, well, nothing.

Having grudgingly conceded that maybe the planet is indeed getting a bit warmer, the climate deniers claim to be unconvinced that greenhouse gases are responsible. “I don’t know that it’s man-made,” said Trump. And while he has sort-of-kind-of backed down on his earlier claims that climate change is a hoax concocted by the Chinese, he’s still seeing vast conspiracies on the part of climate scientists, who he says “have a very big political agenda.”

Think about that. Decades ago experts predicted, based on fundamental science, that emissions would raise global temperatures. People like Trump scoffed. Now the experts’ prediction has come true. And the deniers insist that emissions aren’t the culprit, that something else must be driving the change, and it’s all a conspiracy. Come on.

Why, it’s as if Trump were to suggest that the Saudis had nothing to do with the disappearance of Jamal Khashoggi, who vanished after entering a Saudi embassy — that he was killed by some mysterious third party. Oh, wait."

Opinion | Donald and the Deadly Deniers - The New York Times
Posted by John H Armwood II at 5:59 AM