As Democrats Court Latinos, Indifference Is a Powerful Foe - The New York Times 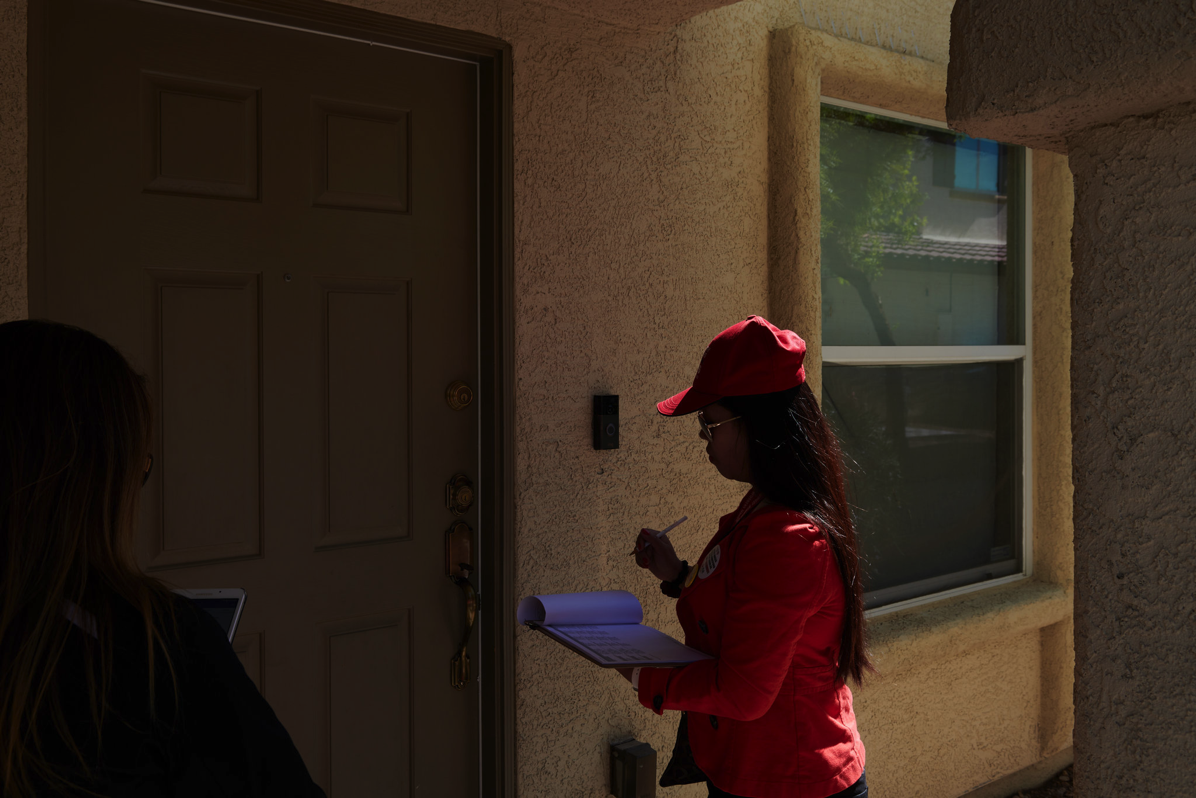 ""LAS VEGAS — Children ripped from their parents’ arms and held in sweltering tent cities. Immigration raids outside hospitals, schools and courthouses. An onslaught of ads and speeches delivering insults and racist remarks.
With the hard-fought midterm elections less than three weeks away, Democratic Party strategists hope Latino voters who are angered by the Trump administration’s policies and divisive language will help deliver resounding victories in many of the races that will decide political control in Washington. If ever there were a time to cast protest ballots, they reason, it would be with President Trump in the White House.

But interviews with dozens of Hispanic voters in Nevada and California, two key battleground states, showed a more complicated picture that is deeply alarming to Democratic Party officials. Away from campaign rallies and candidates, many voters said they felt disempowered rather than emboldened; they expressed feelings of cynicism, apathy and fear fueled by the highly fraught political moment. Others said that messaging about immigration policy alone is not enough to motivate them.

And some have simply lost faith that politicians will follow through on their promises once the elections are over.
“It’s the same as in Mexico — they promise people they’re going to help, and they don’t,” said Cesar Gustamente, 28, over a plate of carne asada in east Las Vegas, when asked about why he might not vote in the tossup Senate race there.
Mr. Gustamente, who is Mexican-American, voted for Hillary Clinton in 2016 and has been upset by President Trump’s language. But “there are times where you’re just wasting your time on voting,” he said.

The Culinary Workers Union has endorsed Representative Jacky Rosen, a Democrat trying to win a Senate seat in Nevada from the Republican incumbent, Dean Heller.Bridget Bennett for The New York TimesAn election-year intensity gap between whites and Hispanics is one of the biggest worries for the Democrats heading into the midterms. They would stand a far better chance of capturing many of the Republican-held House districts that voted for Hillary Clinton, they say, if Hispanic adults registered and voted in greater numbers.

A recent NBC-Wall Street Journal national survey showed a spike in interest in the election among Hispanic voters, but part of the challenge for Democrats is the sharp divisions among those voters. Latinos are not a monolith, and their political decisions are also shaped by age, region, and the immigration histories of their families. Exit polls after the 2016 election found that nearly 30 percent of Latino voters supported Mr. Trump, though some surveys put that figure closer to 20 percent.

At the local level, Hispanic voters are even more willing to support Republicans they know, creating difficulties for Democrats in an election where some of the most imperiled G.O.P. incumbents are not as vulnerable as they may seem on paper.

“To paint all Latinos with the same brush, as being Democrats and having progressive views on issues, even on immigration, is a little bit too simplistic,” said William Frey of the Brookings Institution. “Organizers have to get into the nuances of various Latinos populations.”

There is precedent for the Democrats to worry. While many political strategists believed Mr. Trump’s anti-immigrant stance during the 2016 presidential election would propel historic numbers of Hispanic voters to turn out, the percentage of eligible Hispanics who cast ballots actually declined modestly from 2012, according to census data analyzed by Mr. Frey.
And that was before Mr. Trump took office and the administration began implementing policies that have made some people in immigrant communities uneasy about voting, prompting political advocates to promote absentee voting as an alternative to showing up at the polls.

“Immigrants are being targeted in political advertising, and it’s having a real negative impact,” said Mary Kay Henry, who runs the Service Employees International Union. Ms. Henry, who is involved in mobilizing her union’s Hispanic members, said some are wary of civic engagement. “We’ve had to double down on the outreach,” she said.

Josh Harder, a Democrat running in a district in the Central Valley of California, had a campaign sign posted at a popular flea market in Ceres, Calif.Mason Trinca for The New York TimesOf the 23 Republican-held House districts that Hillary Clinton carried, 11 have populations that are at least 20 percent Hispanic.

From California to Texas to Florida, Republicans in the Latino-heavy districts that Mrs. Clinton won are proving more difficult to beat than Democrats hoped. The Democrats can retake the House without winning such seats, but their majority may be narrow if they do not defeat G.O.P. lawmakers like Will Hurd of Texas or Carlos Curbelo of Florida.

“This has been a major structural problem for us for some time, and if we had fixed it by now, Texas would be a lot more competitive,” said Robby Mook, Mrs. Clinton’s former campaign manager, about a state where Hispanics make up a significantly smaller share of the vote than of the population.

Democratic Senate hopes in Texas and Florida, as well as Arizona and Nevada, depend in no small part on mobilizing Latinos.

Representative Beto O’Rourke has become a bright light among liberal white voters in his challenge to Senator Ted Cruz, but he will not win if he cannot increase Hispanic turnout in Texas’s cities and in the Rio Grande Valley, places where turnout is often dismal. And in Florida, Senator Bill Nelson must take advantage of the influx of Puerto Ricans to the state, both after Hurricane Maria and in the years before, to win re-election.

Senator Dean Heller, a Nevada Republican, is facing a challenge from Democratic Representative Jacky Rosen, who cannot win without a robust showing from Hispanics. “The difference between 15 and 17 percent Latino turnout could be a game changer in these races that are won very closely on the margins,” said Megan Jones, a Democratic political strategist in the state.

Democrats hope foot soldiers like Nubia Acosta and Alfonso Maciel, two canvassers in Las Vegas with the Culinary Workers Union, can reach enough Hispanic voters to swing several of the nation’s closest campaigns.
Local unions like the Culinary Workers have become powerful engines for turning out voters in Nevada. Union members in Las Vegas rallied before hitting the streets to canvas.Bridget Bennett for The New York TimesBeneath the hot Mojave Desert sun on a recent afternoon, they marched door to door across the cracked Las Vegas streets, searching for votes. Tablets in hand, wearing matching red shirts, the two Spanish-speaking canvassers have been working close to 10 hours a day, six days a week, since the summer.

It can be difficult work, but even in an era of digital advertising and blast texts, canvassing is considered the gold standard in political organizing. Face-to-face contact is proven to increase the odds that a voter will actually turn out. “The way you get there isn’t spending another $2 million on television ads,” said Ms. Jones. “It’s spending time to build an army on the ground.”

In Nevada, and especially in Clark County, which includes Las Vegas, unions have become powerful engines for turning out voters. Ms. Henry said S.E.I.U. members in the state had already knocked on the doors of 15,000 Hispanic and Asian voters, and the union brought a couple of hundred of its California members to Nevada by bus to participate in mobilization activities on Saturday, the first day of early voting in the state.

There may be no stronger grass-roots political force in Clark County, which is home to more than three-quarters of the state’s population, than Culinary Workers Union Local 226, known in the county simply as Culinary. The 57,000-member union grants scores of service workers monthslong leaves of absence from their jobs as cooks and cleaners to focus on political outreach. The union has thrown its weight behind Ms. Rosen.
Such a playbook, however, is difficult to replicate in other states.

In California’s Central Valley districts, which are heavily agrarian, Latinos “have not had a lot of communication, particularly at their doors, by Democrats — either because these districts have not been in play for quite some time, or the Democratic campaign efforts were just woefully underfunded,” said Katie Merrill, the chief strategist for Fight Back California, a Democratic group.

Hispanic voters could decide the half-dozen competitive House races in California, but their participation rate remains a big question mark. To win in those seats, the Democrats “ need more of those Latinos to turn out, the ones who are not frequent voters,” Ms. Merrill said.

Jennifer Santiago, 33, said that she is definitely not voting this year, and feels that things in America will not change for the better no matter who is in office.Mason Trinca for The New York TimesBut even Democrats are skeptical that Mr. Cox can galvanize voters this year in the district, which is 75 percent Hispanic and where housing insecurity and social conservatism make voter outreach difficult.

More promising for them is a district farther north, near Modesto, where the Republican incumbent, Jeff Denham, lagged far behind his Democratic opponent, Josh Harder, in fund-raising for the most recent quarter. Ms. Clinton defeated Mr. Trump there by three points in 2016; Mr. Denham held on by the same margin.

Jennifer Santiago, 33, said at a flea market in Modesto that she was not voting this year. Like many Hispanic people in the district, Ms. Santiago said she remains open-minded about Mr. Trump, but she said she felt that things in America would not change no matter who was in office.

“I may be working until I’m in my 70s, who knows, because of the way that America is going, regardless of whoever is running,” she said. “Whether it was Bush, whether it was Obama, and now that we’re here with Trump.”

Maria Esquivel, 34, observed that politicians have not often ventured into Hispanic parts of town to connect with the community directly. She was elated when she saw that Mr. Harder had appeared at the flea market, El Rematito, earlier this month.

“I just don’t think there’s that education out there” she added.

Nationally, 55 percent of Latinos said they have not yet been contacted by a political campaign this year, whether by email, mail, phone or in person, according to a recent survey by Latinos Decision, a polling firm.

And plenty of Hispanic voters share Ms. Esquivel’s frustration. At a Cardenas Market store in east Las Vegas, Enrique Gonzalez said that many of his Hispanic friends who have become citizens do not vote.

“The politicians in our home countries, they leave a lot to be desired, and when we get here, we believe it’s the same — but it’s not,” said Mr. Gonzalez, 50.

Will he vote this year?

“I haven’t missed an election since I became a citizen six years ago,” he said with a smile.
A version of this article appears in print on Oct. 22, 2018, on Page A1 of the New York edition with the headline: Indifference Is a Powerful Foe For Democrats Wooing Latinos."

As Democrats Court Latinos, Indifference Is a Powerful Foe - The New York Times