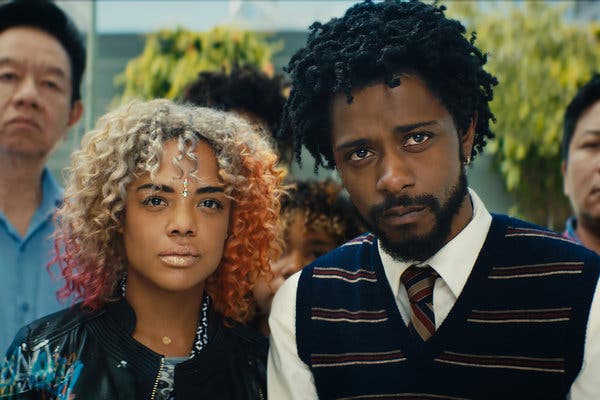 "This is a must-see film.

"When the history of this terrible moment in American life is written, I suspect the surreal and deeply radical indie film “Sorry to Bother You” will be a major cultural marker, like “Easy Rider” in 1969 or “Slacker” in 1990. Watching it — agog that it ever got made in the first place — felt like getting a little glimpse into the future, and not just because its dystopian satire is half a step away from our reality.

“Sorry to Bother You,” a sleeper hit, may be the most overtly anticapitalist feature film made in America. If you want to get a feel for the zeitgeist behind the growth of the Democratic Socialists of America, the wave of unionizing in digital media, the striking teachers in red states, and the general broad seething fury about inequality that’s particularly pronounced among people who came of age amid the Great Recession, it’s a good place to start. It’s the kind of art we can expect as more and more members of the creative class find themselves living precariously, forced to spend inordinate energy worrying about their basic material needs.

I say this even though the film’s writer and director, Boots Riley, avowed Communist and frontman for the Oakland hip-hop act The Coup, is, at 47, far from a millennial. And though “Sorry to Bother You” feels shockingly current, as Jonah Weiner wrote in The New York Times Magazine, Riley published the screenplay as a book in 2014. If it took a long time to gestate, though, it feels like it was born at precisely the right moment.

The film is impossible to really summarize, and I don’t want to give away its gobsmacking twists. It’s about an African-American man named Cassius Green — he goes by Cash — living with his girlfriend, an avant-garde artist, in the garage of his uncle’s house, which is facing foreclosure. Desperate for work, he becomes a telemarketer, where his uncanny ability to feign the voice of a confident white man makes him a star, lofting him into a rarefied realm of high-paid, grotesquely immoral salesmanship. The movie includes subplots about unionization, (literal) debt slavery, viral videos, brutal reality television and the cultural worship of sociopathic entrepreneurs. (As well as weird disturbing stuff I don’t want to give away.) I’ve never seen anything like it.

Last week it was the seventh highest grossing film in the country, on a list that is dominated by big-budget studio movies. The reviews have been rapturous; the young socialists feel seen. “Riley has made the indignity of wage labor a part of the public conversation, including among a multiracial demographic that has been excluded from media narratives about the progressive movement,” Briahna Gray wrote in The Intercept.

Even if it weren’t that good, the mere existence of the movie would be an astonishment. That’s also how I feel about “Dietland,” an uneven drama on AMC about an overweight ghostwriter for a fashion-magazine editor who gets involved with feminist terrorist revolutionaries. (It’s wild to see corporate advertising on a show in which the anarchist idea of the “propaganda of the deed” is invoked more or less sympathetically to justify murdering misogynists.) Dietland is another early sign that the atmosphere of ambient rage we’re all living in is making its way into pop culture.

In another time, the fantasies of violent leftist resistance in “Sorry to Bother You” and “Dietland” might have caused more of a backlash. But the scary obliteration of limits on the right has also opened up new imaginative space on the left. Donald Trump is trying to destroy liberal democracy, a system that seemed inviolable, before our eyes. Watching it happen, it’s hard not to wonder: what other systems might be more fragile than they seem?

At least for the duration of “Sorry to Bother You,” capitalism feels evil but also tawdry and preposterous, and labor solidarity seems sexy and exuberant. Sitting in the theater, I felt like I had a new apprehension of what it might be like to be young, idealistic, and at the mercy of nearly totalitarian economic forces.

Americans in their 20s and 30s, after all, are as a cohort poorer and more indebted than their predecessors, while being surrounded by comic-book villain displays of wealth. (Just this week, Education Secretary Betsy DeVos, whose family owns 10 yachts, proposed to make it harder for students defrauded by for-profit colleges to seek loan forgiveness.) They are the most diverse generation of adults in history at a time of vicious right-wing backlash from older white people.

At moments in “Sorry to Bother You,” I thought of the ads of Alexandria Ocasio-Cortez and Kaniela Ing, a left-wing congressional candidate in Hawaii, both made by the cheekily-named company Means of Production. Both spots showed members of a multicultural working class in small apartments and grimy streets, as the candidates spoke urgently of the systems squeezing their communities. The tone of these advertisements is very different than that of “Sorry to Bother You,” but the worlds they depict, of defiance in the face of privatization and relentless economic pressure, are similar. As multicultural socialism reshapes our politics, it’s probably inevitable that it will also start to reshape our entertainment. Right now, anticapitalism is a growth market."