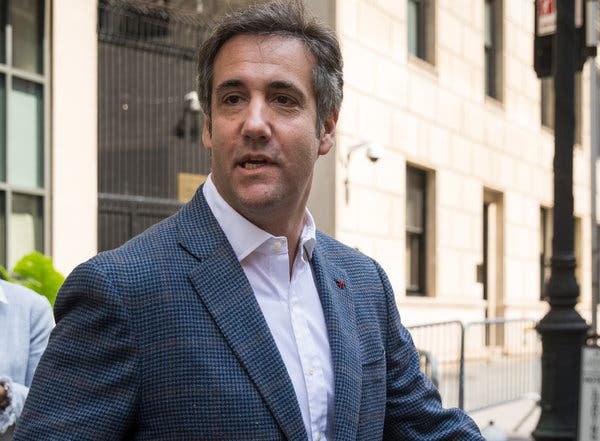 If Trump’s personal lawyer really puts family and country first, he could earn a sliver of redemption.

First, let’s state forthrightly that Cohen, Trump’s longtime lawyer, the fix-it man, the one who mopped up Trump’s messes, the one who said he would “take a bullet for the president,” is an incredibly unsavory character and a bully.

He thought himself a tough guy, Trump’s muscle collecting the crumbs of Trump’s money.

For instance, in 2015 he threatened a Daily Beast reporter who was writing about the time Trump’s first wife, Ivana, claimed Trump had raped her, only to later say that she didn’t want her use of the word rape “to be interpreted in a literal or criminal sense.”

According to that reporter, Cohen erroneously — and outrageously — claimed, “You cannot rape your spouse,” before launching into this tirade:

“I will make sure that you and I meet one day while we’re in the courthouse. And I will take you for every penny you still don’t have. And I will come after your Daily Beast and everybody else that you possibly know … So I’m warning you, tread very [expletive] lightly, because what I’m going to do to you is going to be [expletive] disgusting. You understand me?

“You write a story that has Mr. Trump’s name in it, with the word ‘rape,’ and I’m going to mess your life up … for as long as you’re on this frickin’ planet … you’re going to have judgments against you, so much money, you’ll never know how to get out from underneath it.”

This is not a likable man, or one deserving of sympathy.

Ever since the F.B.I. raided Cohen’s office, home and hotel room in April, seizing thousands of documents as well as digital devices, it has been clear that Cohen was in very real trouble, and that that peril may well extend to Donald Trump and his family.

The New York Times reported at the time:

“President Trump’s advisers have concluded that a wide-ranging corruption investigation into his personal lawyer poses a greater and more imminent threat to the president than even the special counsel’s investigation, according to several people close to Mr. Trump.”

Cohen was going down. The only question was how he would manage the descent.

Would he remain loyal to a president who doesn’t seem to understand that loyalty should be reciprocal, or would he succumb to pressure and the very real prospect of a stint in prison, and cooperate with investigators?

It is becoming incredibly clear that Cohen has broken from the president, as he keeps signaling that he is willing to disclose whatever he knows of Trump’s concealments. And he could know quite a bit.

CNN reported on Friday that “sources with knowledge” told the network that Trump knew of the infamous Trump Tower meeting during the campaign in which Russians promised dirt on Hillary Clinton.

According to the report:

“Cohen alleges that he was present, along with several others, when Trump was informed of the Russians’ offer by Trump Jr. By Cohen’s account, Trump approved going ahead with the meeting with the Russians, according to sources.”

That revelation would be damning if true, not only because Trump and his associates have repeatedly lied about the nature of that meeting, but also because it would go more directly to the heart of collusion and conspiracy.

That’s the thing about Cohen: He was so often in the room. He undoubtedly knows things about all the issues that plague this president: those around the women who have made allegations against him, his murky financial entanglements and the Russian attempts to connect with his campaign.

Not only are there documents, but also Cohen has secret recordings, including of the president, as we found out last week.

Cohen is a valuable asset and he knows it.

Now he’s attempting to convert himself from parasite to patriot.

Earlier this month, Cohen was interviewed by ABC and said of his loyalties: “I put family and country first.”

Trump seems to always surround himself with lap dogs and lackeys, people who will do and say anything to defend and protect him, praise and promote him. Trump is the sun at the center of his own universe.

“Why is Giuliani out falsely disparaging Michael Cohen — because they fear him.” Davis continued:

For this, Trump world will seek to destroy him. Michael Cohen will indeed take that bullet, metaphorically speaking of course — not for Trump, but from him.

But, if Cohen indeed becomes a cooperating witness for the Robert Mueller Russia investigation, he will salvage a tiny bit of honor from a life of dishonor. He will purchase a sliver of redemption."