North Korea Criticizes ‘Gangster-Like’ U.S. Attitude After Talks With Mike Pompeo - The New York Times - They have an excellent point. We have a third generation gangster as President. 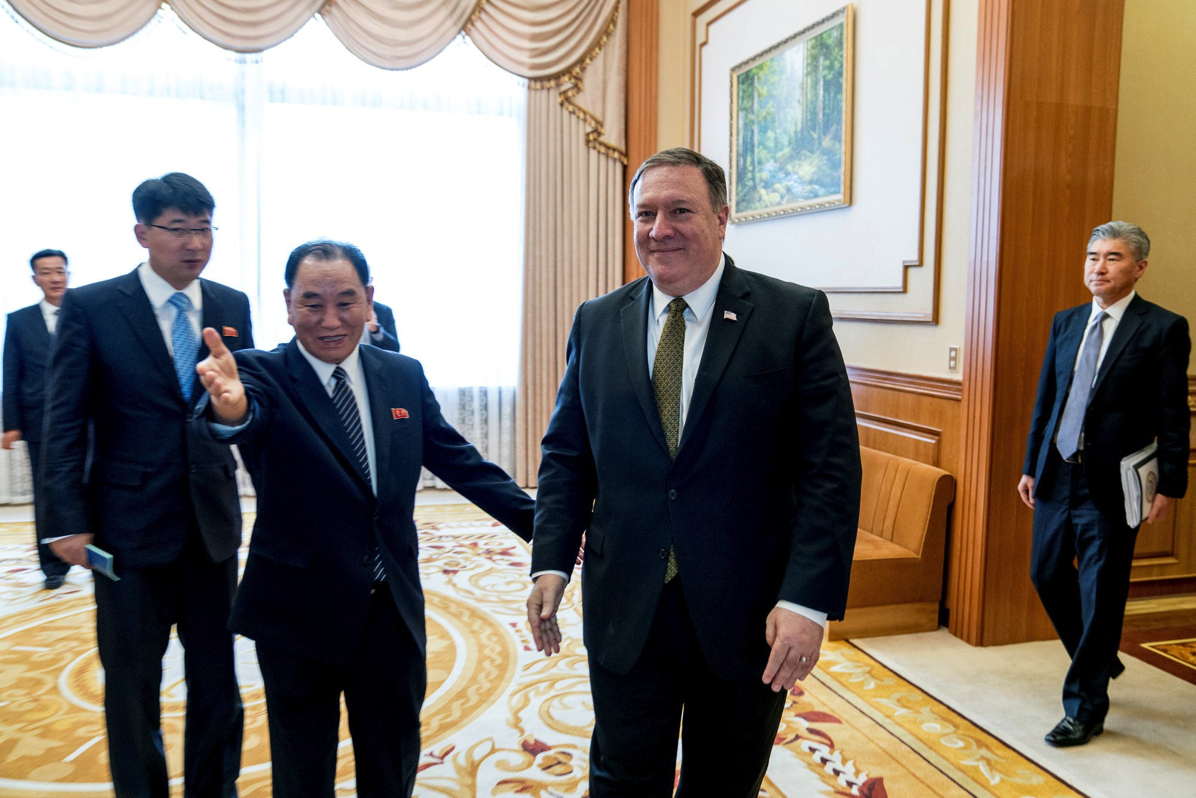 "PYONGYANG, North Korea — North Korea accused the Trump administration on Saturday of pushing a “unilateral and gangster-like demand for denuclearization” and called it “deeply regrettable,” hours after Secretary of State Mike Pompeo said his two days of talks in the North Korean capital were “productive.”

Despite the criticism, North Korea’s Foreign Ministry said the country’s leader, Kim Jong-un, still wanted to build on the “friendly relationship and trust” forged with President Trump during their summit meeting in Singapore on June 12. The ministry said Mr. Kim had written a personal letter to Mr. Trump, reiterating that trust.

The harsh North Korean reaction may have been a time-tested negotiating tactic. Two months ago, a brief blowup between the two countries led President Trump to briefly cancel, then reschedule, his summit meeting with Mr. Kim. But North Korea’s remarks also played to a larger fear: that the summit meeting’s vaguely worded commitment to “the denuclearization of the Korean Peninsula” meant something very different in Pyongyang and Washington.

Distrust on both sides has led the Americans to insist on rapid, deep dismantlement and highly intrusive verification; the North Koreans want an early lifting of sanctions and a formal end to the Korean War, among other steps.On Saturday, Mr. Pompeo and his entourage offered no immediate evidence that they had come away with anything tangible to show that North Korea was willing to surrender its nuclear and missile weapons programs. Mr. Pompeo did not meet with Mr. Kim, as he had in past visits, but held talks with Kim Yong-chol, a senior official who has been the country’s point person in deliberations with the United States, South Korea and China.

“These are complicated issues, but we made progress on almost all of the central issues,” Mr. Pompeo said before boarding a plane for Tokyo. He called the meetings “productive.”

Administration officials said Saturday that they were neither surprised nor concerned about the North Korean response, and they pointed out that its final lines, the ones attributed directly to Mr. Kim, were conciliatory and referred to a feeling of trust toward Mr. Trump.

The North Korean Foreign Ministry’s assessment was decidedly downbeat.
“The attitude and demands from the U.S. side during the high-level talks were nothing short of deeply regrettable,” the ministry said, accusing American “working-level” officials of trying to destroy the agreement struck in Singapore.
Mr. Pompeo came to Pyongyang to try to get the North Koreans to match their vague commitment to denuclearization — signed by Kim Jong-un in the June meeting with President Trump — with some kind of action. Among the first priorities were a declaration of weapons sites, a timeline of deconstruction efforts and, perhaps, a written statement that the North’s definition of denuclearization matched Mr. Pompeo’s.

Washington insists that North Korea disclose all the details of its nuclear weapons program, dismantle its facilities and let outside inspectors verify the steps. The idea is to remove all the North’s nuclear weapons and its ability to build more, before offering any significant rewards.

The North has long rejected such an approach, instead demanding that the United States take reciprocal measures in each “phased” step it takes toward denuclearization.

On Saturday, the North Korean statement reiterated that “phased, simultaneous actions” were “the quickest way of realizing the denuclearization of the Korean Peninsula.”

During their meetings with Mr. Pompeo, North Korean officials proposed dismantling a missile engine-test site and opening negotiations for repatriating the remains of American service members killed in the Korean War, the Foreign Ministry said. In return, they proposed that the United States take “simultaneous” actions of expanding bilateral exchanges and announcing an end to the Korean War in July.

But the ministry said that the United States balked at declaring an end to the war, which North Korea said was a crucial first step toward building trust.

“The issues the U.S. side insisted on during the talks were the same cancerous ones that the past U.S. administrations had insisted on,” the ministry said.