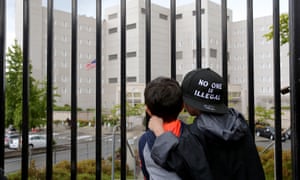 "It’s impossible to look at the Trump administration’s practice of migrant family separation and see it as anything other than what it is: institutionalized child abuse.

By now, there have been real horror stories: parents hearing their children screaming in the next room; a man who committed suicide when his three-year-old was taken from him; children kept in what Oregon senator Jeff Merkley described as a “”; a woman being  by a border patrol agent: “You will never see your children again. Families don’t exist here. You won’t have a family any more.”

Enough of these stories have come out that any questions of them being isolated incidents have been put to rest. These are not actions by rogue agents. They are systematic, and they come straight from the top. Indeed, attorney general Jeff Sessions has acknowledged as much, announcing in May a policy which had already been in practice for much of the past year.

Adults caught crossing the border illegally are transferred to criminal custody to be prosecuted for that crime – a misdemeanor – including those exercising their legal right to seek asylum. Their children are taken from them and placed in the custody of the Department of Health and Human Services as “unaccompanied minors”. Sessions has equated parents with human traffickers: “If you are smuggling a child, then we will prosecute you and that child will be separated from you as required by law.”

‘Leaving one’s country to seek asylum in another is not a decision made lightly.’ Photograph: Frederic J Brown/AFP/Getty Images

The trauma caused by these separations for parents and their children is not an unfortunate byproduct of a necessary legal process; it is the whole point. It is a punishment designed to be as grotesque as possible in order to scare other migrants. The use of family separation as a migration deterrent was discussed a year ago by Department of Homeland Security officials before it was formally adopted; since then, the administration has bragged that the separations have led to a drop in border crossings. This is, in fact, not true, based on DHS’s own numbers, as Vox’s Dara Lind has pointed out.

That such a policy is both unnecessarily cruel and ineffective in its stated purpose suggests it is simply sadism for its own sake, aimed at a population Donald Trump does not regard as human. It speaks to this administration’s blind faith that making the migration process as dehumanizing as possible will make it less attractive, as if the migration process isn’t unpleasant enough as it is for those desperate enough to undertake it.

Leaving one’s country to seek asylum in another is not a decision made lightly. Those crossing the southern border today are overwhelmingly Central American, fleeing spiraling violence caused by the very gangs Trump has declared mortal enemies of the US. Families leave with their life savings, traversing Mexico through a network of predatory smugglers and a criminal cottage industry set up to rip off migrants, usually reaching the border with nothing. In Mexico, I spoke with one Guatemalan diplomat who said that many women take birth control pills before leaving because they expect to be raped along the way.

Yet to this administration, asylum is not a valid legal process, it is a loophole that needs to be closed – including, most recently, for victims of domestic violence – and children are useful tools for doing so. This is why we do not see much hand-wringing from the Trump administration over such stories. They want word to get out, believing that they will serve as a warning to future would-be migrants. The suicide of Marco Antonio Muñoz, who hanged himself in a Texas jail after being separated from his wife and toddler son, is this policy working as it was intended.

By declaring the immigration system “broken”, the Trump administration attempts to justify any and all measures they seek to use, up to and including child trauma and psychological torture of parents. None of this is unavoidable. It is the product of individual politicians looking for creatively perverse ways to exploit a hot button issue, immigration. The immigration debate as it stands today is a false dichotomy between “open borders” and “closed borders”. Neither exist, only a complex set of laws and enforcement mechanisms which are at the discretion of elected officials. All countries regulate migration using a variety of policy instruments. Voters need to decide whether child abuse should be considered a valid one."