Opinion | Was Slavery a Factor in the Second Amendment? - The New York Times 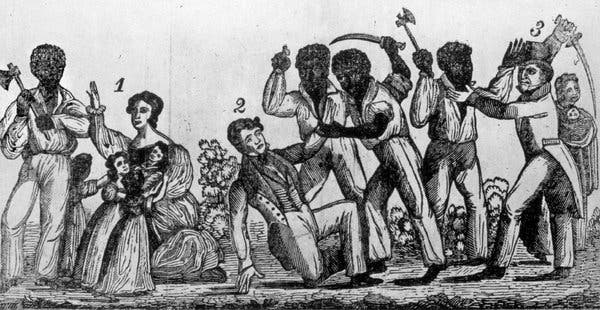 "Every mass shooting, like the most recent at Santa Fe High School in Texas that left 10 people dead, reignites a passionate debate over the Second Amendment. For many Americans, if there is an image that comes to mind when they think about that amendment, it is the musket in the hands of minutemen at Lexington and Concord.

A dramatic but little-known story reveals that a more accurate image may be the musket in the hands of slave owners. It explains why, when he entered Congress and wrote a Bill of Rights, James Madison included a right to bear arms, and why it included the clause “A well regulated Militia, being necessary to the security of a free State …”

The story begins in June of 1788. Virginia was holding a convention in Richmond to decide whether to ratify the Constitution the founders had drafted in Independence Hall the previous year. Eight states out of the nine necessary to adopt the Constitution had already ratified, but Rhode Island, North Carolina, New Hampshire and New York looked unlikely to ratify. All hope for the ninth hung on Virginia.

The Virginia convention featured a dramatic debate between federalists, who favored ratification, and antifederalists, who opposed it. The debate pitted James Madison, a federalist and the principal drafter of the Constitution, against George Mason, the intellectual leader of the antifederalists, and Patrick Henry, Virginia’s governor and a renowned orator.

Mason and Henry raised many arguments against ratification. One concerned the militia. To appreciate their arguments, we must bear three things in mind about the time and place of the debate.

First, the majority population in eastern Virginia were enslaved blacks. Whites lived in constant fear of slave insurrection. Everyone knew about the 1739 slave rebellion in Stono, S.C., when blacks broke into a store, decapitated the shopkeepers, seized guns and powder, and marched with flying banners, beating drums and cries of “Liberty!” Up to 100 joined the rebellion before being engaged by a contingent of armed, mounted militiamen. Scores died in the ensuing battle.

Second, the principal instrument for slave control was the militia. In the main, the South had refused to commit her militias to the war against the British during the American Revolution out of fear that, if the militias departed, slaves would revolt. But while the militias were effective at slave control, they had proved themselves unequal to the task of fighting a professional army. Bunker Hill was the last militia victory during the Revolution. The Continental Army (aided by the French Navy) won the war.

During the debate in Richmond, Mason and Henry suggested that the new Constitution gave Congress the power to subvert the slave system by disarming the militias. “Slavery is detested,” Henry reminded the audience. “The majority of Congress is to the North, and the slaves are to the South,” he said.

Henry and Mason argued that because the Constitution gave the federal government the power to arm the militias, only the federal government could do so. “If they neglect or refuse to discipline or arm our militia, they will be useless: the states can do neither — this power being exclusively given to Congress,” Henry declared.

“The power is concurrent, and not exclusive,” Madison replied. That was a blunder. The Constitution expressly parceled out different powers over the militia to Congress or the states. Henry ridiculed Madison for suggesting a state could exercise a power given to the federal government, or vice versa. “To admit this mutual concurrence of powers will carry you into endless absurdity — that Congress has nothing exclusive on the one hand, nor the states on the other,” Henry said.

The vote was close, but Virginia ratified. Unexpectedly, and unbeknown to Virginia, New Hampshire had done so as well. The Constitution was adopted.

In the fall, Madison ran for Congress. His opponent, the rising young politician (and future president) James Monroe, lambasted Madison for not including a bill of rights in the Constitution. Because he believed rights were best protected by the structure of government, Madison previously opposed a bill of rights. Now he was fighting for his political life in a congressional district where a bill of rights was popular. Madison changed his position and promised voters that, if elected, he would write one.

As we know, he included a right to bear arms. Only four of the 13 state Constitutions had such a provision. The Virginia Declaration of Rights, written by none other than George Mason in 1776 when states controlled the militias, did not have one. Following its debate and decision to ratify, the Virginia convention proposed Congress consider a declaration of 20 rights, including a right to bear arms, and 20 constitutional amendments, including one giving states the power to arm their militias if Congress did not.

I believe it likely that Madison sought to correct the problem Henry and Mason had railed against in Richmond. Madison was determined that nothing in the Bill of Rights contradict anything in the main body of the Constitution; and the states had traditionally armed their militias simply by requiring that members bring their own guns with them when called to duty.

Consider, against this background, the language of Second Amendment: “A well regulated Militia, being necessary to the security of a free State, the right of the people to keep and bear Arms, shall not be infringed.”

Today, the Second Amendment is often extolled as a “safeguard against tyranny.” Even the Supreme Court used that phrase in 2008 when, for the first time, it held that the amendment grants a right unrelated to the militia.

Would we think differently about the amendment if we realized that its genesis was, at least in part, a concern with preserving a form of governmental tyranny?"

Opinion | Was Slavery a Factor in the Second Amendment? - The New York Times
Posted by John H Armwood II at 5:14 PM