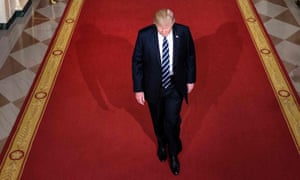 "It was a startling omission even according to the peculiar moral norms of the Trump era. When Wendy Vitter, one of the US president’s judicial nominees, was asked whether she supported the supreme court’s 1954 Brown v Board of Education decision to end racial segregation in schools – a nearly sacred pillar of progress for civil rights in the 20th century – she did not say yes.

“I don’t mean to be coy,” Vitter, who is up for a seat on the US district court for the eastern district of Louisiana, told her Senate confirmation hearing. “But I think I get into a difficult area when I start commenting on supreme court decisions which are correctly decided and which I may disagree with.”

If approved, Vitter, currently general counsel of the Roman Catholic Archdiocese of New Orleans and an opponent of abortion rights, would join a wave of lifetime appointments that threatens to fundamentally tilt the balance of America’s courts – and embolden conservative activists to bring cases that once seemed lost causes.

With just over a year in office, Donald Trump has already appointed 21 of America’s 167 current circuit judges and intends to fill an additional 20 or more vacancies by the end of the year. He is far outpacing Barack Obama, whose 21st circuit court nominee was approved 33 months into his presidency amid gridlock in Congress. Seventeen of Trump’s nominees for district courts, most of whom replaced Democratic appointees, have also been approved by the Republican-controlled Senate.

Dominated by white men, many of whom are under 50, it is the least diverse crop of new judges for a generation and may prove Trump’s most lasting legacy. Last December, for example, an analysis by the progressive organization Lambda Legal found that nearly one-third of his judicial nominees up that point had anti-LGBT records, with some openly hostile to gay rights.

“This is stunning,” said Christopher Kang, former deputy counsel to Barack Obama, who for more than four years was in charge of the selection, vetting, and confirmation of Obama’s judicial nominees. “Conservatives are using the courts to bring us back to a time when ‘religious liberty’ allowed discrimination. We’re seeing legal arguments we had hoped were consigned to the dustbin of history being dusted off and used again in the hope of turning back the clock on the way we treat all Americans.”

Four cases relating to Trump’s ban on transgender personnel in the military are working their way through the courts. Employment and housing protections for LGBT individuals could be at risk. Battles over reproductive rights are also underway at the state level. Last month a federal appeals court blocked an Ohio law that would cut taxpayer funding to 28 Planned Parenthood clinics, holding that conditions it imposed that denied funds to abortion providers were unconstitutional. But campaigners against abortion rights are unlikely to be deterred.

Kang, now chief counsel at the not-for-profit group Demand Justice, said: “In the efforts to roll back reproductive rights, they’re going to keep trying until they find a judge with such ideologically extreme views that he or she agrees with them.” He added: “If the supreme court moves in their direction, they only need to get one case up to the supreme court to overturn Roe v Wade.”

Trump, on course to be the first Republican since Herbert Hoover to name fewer women and minorities to the court than his Republican predecessor, has shown no compunction about weaponizing the courts for political ends. At a Susan B Anthony List campaign for life gala in Washington last week, he boasted of appointing a record number of judges who will “defend our constitution and interpret the law as written”, seen by critics as cover for a throwback to the gender and racial injustices of the founding document.

Judicial appointments have proved crucial for grassroots conservatives and Christian evangelicals who might otherwise be alienated by Trump’s sex scandals and boorish behavior. Many cited the supreme court vacancy as a major factor in their decision to vote for him in the 2016 presidential election, and they were rewarded with his pick of the conservative justice.

Similarly, his nominations to the lower courts rushed through by Republicans without many of the usual protocols and traditions, have insulated him from criticism on his right flank. Curt Levey, president of the right-wing advocacy group the Committee for Justice, said: “I can’t tell you how many conversations I’ve had with people where the first thing they jump out and say is ‘judges’.”

And Hugh Hewitt, an author, and commentator, wrote in the Washington Post last week: “Someday, conservative critics of President Trump will have to reconcile their vehement opposition to him with their love of the Constitution.”

Hewitt predicted: “By 2019, Trump judges will be participating in more than 15,000 decisions every year, and almost all those decisions will be the law of the land. There will be no fewer than 400 crucial case votes and dozens of signed opinions, each year, every year for most of the Trump judges.”

Trump’s judicial picks are profoundly shaped by the Federalist Society, a group of conservatives and libertarians who favour an “originalist” interpretation of the constitution, and the Heritage Foundation, a Washington thinktank where Newt Gingrich is a regular speaker and where Margaret Thatcher is lionised.

John Malcolm, vice-president of the Institute for Constitutional Government at the Heritage Foundation, said: “In the same way that liberals have pushed more progressive causes when they felt the judiciary was favourable, I’m quite sure that when there are more conservatives on the bench, that will prompt conservative groups to file more lawsuits.”

Progressives have in recent years won landmark victories on issues such as same sex marriage and transgender rights. But conservatives, sensing the wind changing in their favour, may push significantly harder on issues such as environmental regulations, land rights, racial profiling, trade unions and reproductive and voting rights.

Douglas Keith, counsel with the fair courts arm of the Brennan Center for Justice, said: “There’s long been an asymmetry to interest, resources and advocacy, with the right organising much more than the left.”

The Judicial Crisis Network (JCN), he noted, was spending millions of dollars to support Trump’s nominees in the low courts, for example by running TV ads to pressure vulnerable Democrats to support them.

Even so, the impact on litigation strategy will take time, Keith suggested. “It is a long game. It is not always the one big case; it may be smaller cases at the district and circuit courts.”

The JCN itself denied that activists were using the courts as a blunt instrument. Carrie Severino, its chief counsel and policy director, said: “The conservative strategy shouldn’t ever be – and isn’t in these cases – to run to the courts to change the law. That’s the legislature’s job.

“However, there are many issues in which the legal questions are fairly clear if the judge is willing to set aside his or her own politics to decide based on the law alone. In those cases, it is a great relief to litigants to know they will be treated fairly in the courts.”

But for their opponents, the road is long and bleak. Sasha Buchert, a staff attorney at Lambda Legal, warned of the implications for LGBT rights. “It’s absolutely a disaster. This is putting Trump’s values on the courts for the next 10, 20 or 30 years in places where folks have the least protections already.”

How Donald Trump is weaponising the courts for political ends | US news | The Guardian
Posted by John H Armwood II at 4:27 AM