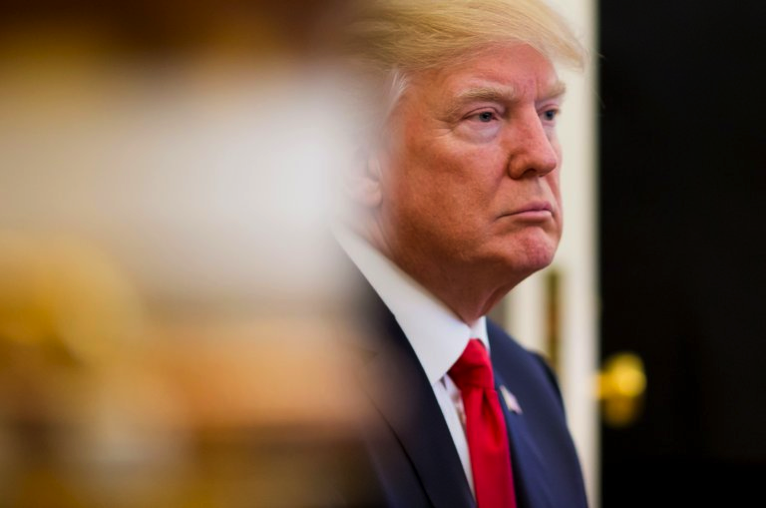 "Donald Trump will destroy this entire country — its institutions and its safeguards, the rule of law and the customs of civility, the concept of truth and the inviolable nature of valor — to protect his own skin.

We are not dealing with a normal person here, let alone a normal president.

This is a damaged man, a man who has always lived in his own reality and played by his own rules. When the truth didn’t suit him, he simply, with a devilish ease, invented an alternate reality. There were no hard and fast absolutes in his realm of rubber. Everything was malleable, and he had an abundance of gall and a deficit of integrity to push everything until it bent.

Also, he didn’t start his run for president believing that he could actually win, or even wanting to win. It was just another show, another act in the carnival. He came slowly, I believe, to the realization that he could win, and more important, that he wanted to.

But again, he didn’t want to win to serve the country; he wanted to win to serve his ego. He wanted to win simply because he hates losing, and to come close and lose was far more injurious than to be able to say early on that a party of traditionalists simply wasn’t avant-garde enough for the radical change he represented.

In the process of turning a vanity campaign into an valid campaign, he had to hurry up and ramp up, and he had to take on some of the only people willing to ally themselves with such a ridiculous, tarnished, vile, scandalous, unscrupulous person. The people he got for his team share many of those same characteristics.

Hearthkeeper 9 hours ago I have been reading political news and opinion every day since Trump got nominated because I was terrified about the fate of our country and...

Hillary 9 hours ago Sorry, Blow, just don't see the destruction of our country coming from this President. To date, all I've seen is liberal politician...

The president won the election, with Russian assistance and against all odds. The win shocked the world, including Donald Trump himself. He hadn’t had to alter his most negative traits; he won with them on full display.

He was working-class white America’s rebuff to an erudite black man and a supremely experienced woman. Trump’s defects had been validated. He was loved among those who hate.

But Trump had no clue that his greatest victory could open him to his greatest jeopardy. For him, it is a stinging irony that his lifetime high could lay him low.

He is incensed by the threat and is shifting every lever of power to thwart it. His own survival, and that of his family and empire, is all that matters. For him, this is the ultimate game of Machismo Monopoly: The properties are at stake and there’s a ‘Go To Jail’ square in Robert Mueller’s corner.

Another part of all of this that must sting is that much of this legal mess springs from Trump’s own recklessness and impetuousness.

Newsletter Sign UpContinue reading the main story Sign Up for the Opinion Today Newsletter Every weekday, get thought-provoking commentary from Op-Ed columnists, the Times editorial board and contributing writers from around the world.

SEE SAMPLE MANAGE EMAIL PREFERENCES PRIVACY POLICY OPT OUT OR CONTACT US ANYTIME The people he surrounded himself with were shady characters, just like him. For instance, Carter Page is the most weaselly of creatures. And yet the president was touting him as one of his foreign policy advisers.

The dud of a memo by the near-treasonous water boy Devin Nunes was mostly about FISA repeatedly granting the F.B.I. permission to monitor Page’s contacts with Russians. Far from tarnishing the investigation into Russian contacts with the Trump campaign, the memo seemed to bolster the credibility of that investigation.

The investigation was not only born of the Christopher Steele dossier, as Trump and his lackeys had insisted. The memo says this about Trump campaign adviser George Papadopoulos:"

(Via.). Constitutional Crisis in Slow Motion - The New York Times