The Ghost of Steve Bannon - The New York Times 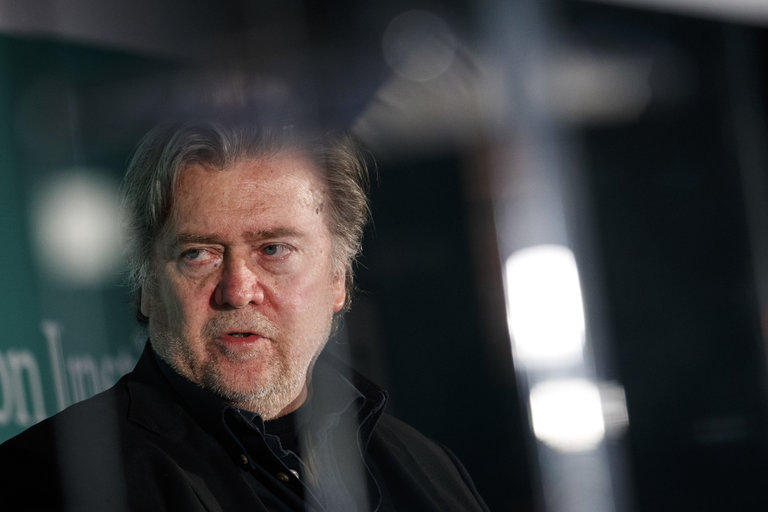 Charles Blow - "Steve Bannon may no longer be physically in the White House, but his spirit lingers there as the guide of the Donald Trump administration and the soul at the core of its beliefs.

Bannon is Dickensian in the way his presence — and nominal absence — haunts the Trump presidency, defining its past, dictating its present and damning its future.

Bannon is the author of Trump’s ideology.

It is always worth remembering that Bannon, who departed the White House in mid-August and returned to his right-wing website Breitbart the same day, last year proudly told Mother Jones: “We’re the platform for the alt-right.”

Alt-right is just a new name for Nazis and racists.

Maybe more important, the Nazis and racists believe that Breitbart is a welcoming platform for them. A few days before Mother Jones published its interview with Bannon, The Daily Beast published this:

Yes, that Richard Spencer, the one who has led three tiki-torch hate marches in Charlottesville, the second of which resulted in the killing-by-car of counter protester Heather Heyer. That was the same protest about which Donald Trump insisted that there “were very fine people on both sides.”

Whether it was deliberate or the result of “elective affinities,” the two are drawn to each other out of shared interests and a shared worldview.

Even the phrase “elective affinities” is likely taken from the title of an 1809 novel by famed German writer Johann Wolfgang von Goethe, although its usage traces back earlier.

That established, it is important to recall the three pillars of the Bannonite “America First” philosophy.

Earlier this year at the Conservative Political Action Conference, Bannon outlined them: national security and sovereignty; economic nationalism; and deconstruction of the administrative state.

Everything Trump does or says falls into one of those buckets.

Last month, when Trump appointed Mick Mulvaney, a man who despises the Consumer Financial Protection Bureau, to be acting director of that bureau, Trump continued his Trojan Horse strategy of implanting enemies in government agencies to disable or even destroy them.

When the desperate-for-a-win Republican Senate last week passed their 11th-hour disaster of a tax bill that will eventually prove a jackpot for the donor class and an albatross for the working class, Trump ensured that working people would most feel the pain from the bill, in cutbacks to government services like education and the social safety net.

Trump’s continued attacks on the media — and on truth itself — is an attempt to weaken the watchdogs, to grease the skids toward more oligarchy, more authoritarianism, more fascism.

Even as the special counsel, Robert Mueller, picks Trump’s inner circle apart, Trump is fully focused on doing as much damage as possible before reaching his ever-more-likely demise.

Trump may one day have to abandon the post he inhabits, but he plans to reduce the village to ashes before he exits.

This sort of pumped-up, fatal heroism in service of white nationalism and in opposition to government sounds to me rather Bannon-esque.

And we know that Bannon still has the president’s heart, as well as his ear.

As The Washington Post reported at the end of August, Trump continued to defy the wishes of his Chief of Staff John F. Kelly, including by reaching out to Bannon: “The president continues to call business friends and outside advisers, including former chief strategist Stephen K. Bannon, from his personal phone when Kelly is not around, said people with knowledge of the calls.”

On Sept. 12, The Wall Street Journal reported that Bannon told a private group in Hong Kong that he “speaks with President Donald Trump every two to three days.”

But The Post followed up in October, reporting that Trump and Bannon “have remained in frequent contact, chatting as often as several times a week,” and that “Trump usually initiates the talks because incoming calls now are routed through chief of staff John F. Kelly and his disciplinarians.”

The Post continued: “Bannon tells confidants he sees himself as ‘the president’s wingman,’ tending to his base and taking on his enemies. Trump still frequently consults him, and Bannon believes he is executing the president’s wishes.”

Trump the con man has a wingman and together, in the shadows, they are leading us to ruin."

The Ghost of Steve Bannon - The New York Times
Posted by John H Armwood II at 8:39 AM