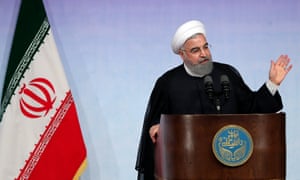 Trump’s recent threat to decertify the Iran nuclear deal is the latest and most dangerous Trumpian gambit yet, and it has emerged that the US is working to designate the Revolutionary Guards a terrorist group. Just about the only person in his administration who believes abrogating the agreement isn’t dangerously foolish is Trump himself. But he promised his loyal base, Fox News and Steve Bannon, he would dump the accord. How can Trump keep his base happy, assuage his fragile ego and not blow up the world?..."