A fallen black soldier being disrespected? That's not an aberration in America. The reported treatment of Sergeant La David Johnson’s family is part of this country’s ugly history regarding black people and the military. | Ameer Hasan Loggins | Opinion | The Guardian 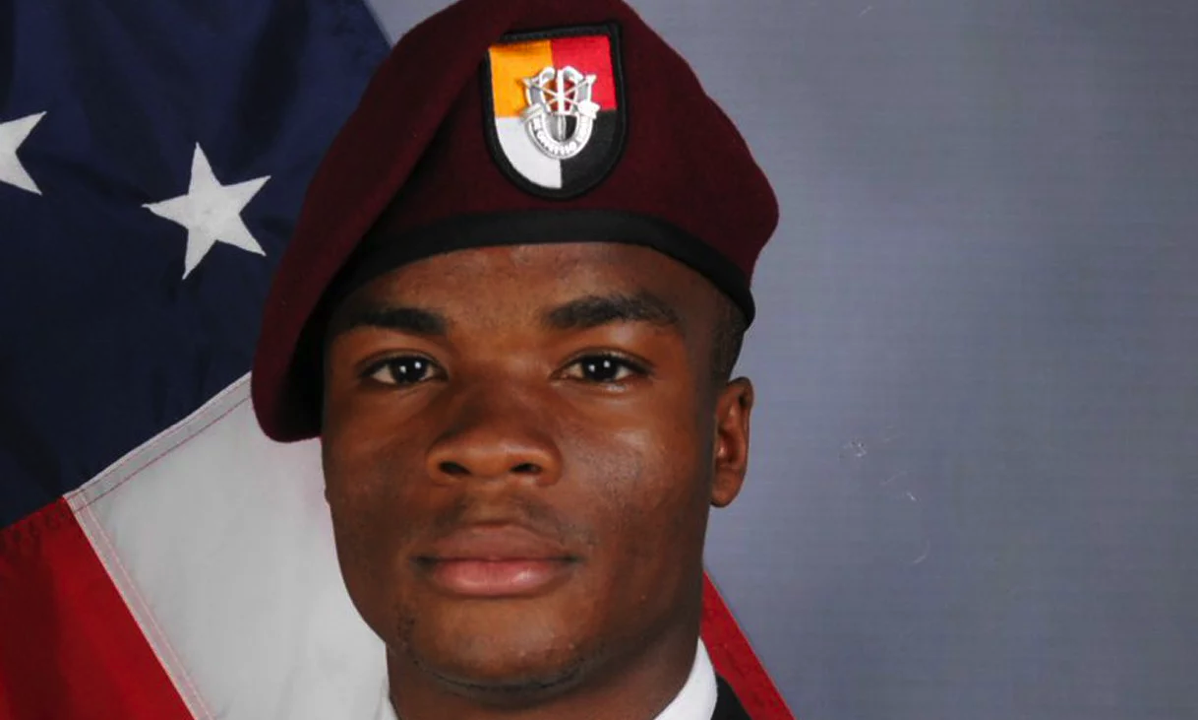 "Donald Trump’s reported response to Myeshia Johnson, widow of slain soldier Sergeant La David Johnson, has the 45th president of the United States in the thick of yet another controversy. According to Frederica Wilson, a Democratic congresswoman from Florida, Trump said to the grieving widow that her husband “must have known what he signed up for”.

In an interview on CNN’s New Day, Wilson said Trump’s condescending condolences made the young widow cry: “When she actually hung up the phone, she looked at me and said: ‘He didn’t even know his name.’ That’s the worst part.”

Sergeant Johnson’s mother, Cowanda Jones-Johnson, added: “President Trump did disrespect my son and my daughter, and also me and my husband.” After the president’s denial of the accusations, Jones-Johnson stood her ground in a Facebook post: “Yes, he did state that comment.”
I looked at the face of Sergeant Johnson, forever frozen in a picture. I recognized a black family in pain, and while Trump’s voice bounced around my brain saying “he must have known what he signed up for”, I found myself finishing his sentence, thinking: “Yes, he sadly signed up to be a part of history riddled with black military veterans being disrespected in the United States.”

The close of the civil war marked a rejuvenated reign of racialized terror levied on black individuals and communities in America. After the Emancipation Proclamation of 1865, thousands of black children, women, and men were slaughtered as a violent response to freedom for former enslaved black people.

As the 2016 report by the Equal Justice Initiative, a Montgomery, Alabama-based civil rights organization reminds us:

Sadly the racialized terror experienced by black veterans was also taking place inside of the military, as the military death penalty fell disproportionately on black soldiers.

During the first world war, black folks in America accounted for less than 10% of the army’s enlistment. Yet during the war, 70 soldiers were executed by the US military and, of those, 55 (79%) were black.

After President Truman ordered an end to the armed forces’ segregation in 1948, this racial disparity actually increased. The military carried out 12 executions from 1954 until the most recent one in 1961. Eleven of the 12 executed service members were black.

Disproportionate punishment for black people in the military continues to this very day. According to a 2017 study published by military advocacy group Protect Our Defenders, found “significant racial disparity in the military justice system.”
Black members of the military are, “substantially more likely” than their white counterparts to be punished in four out of the five branches of the US armed forces.

The report also found that black military service members were as much as 2.61 times more likely than their white peers to face court-martial or non-judicial punishment in an average year, noting that:

I fully empathize with the family of Sergeant La David Johnson. I can only imagine the levels of loss that they are feeling at this time: the loss of a loved one, the loss of privacy.
Sadly, the lack of respect given to them is not an American aberration. It is a part of this country’s ugly history regarding black people and the military.(Via.). A fallen black soldier being disrespected? That's not an aberration in America | Ameer Hasan Loggins | Opinion | The Guardian: