Warmongers and Peacemakers at the U.N. - The New York Times 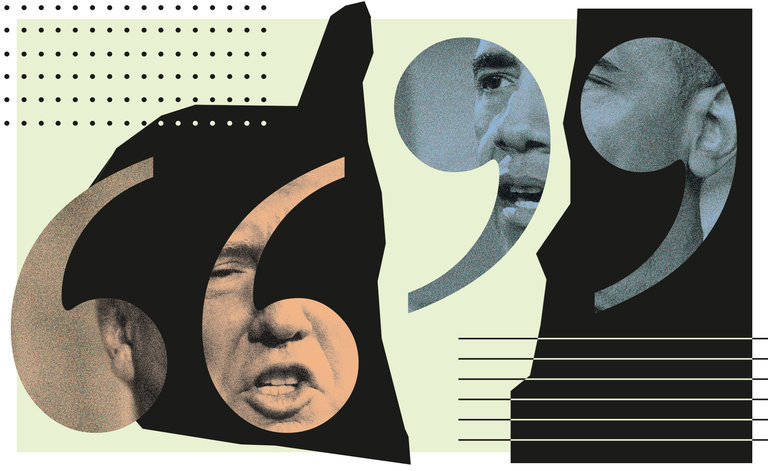 "The United Nations isn’t the venue one would expect for threatening war. Yet that’s what President Trump did in his first address to the General Assembly.

Mr. Trump’s performance had echoes of President George W. Bush’s infamous “axis of evil” demonizing of Iran, North Korea and Iraq in 2002. This time, Iraq was spared, having disappeared from Mr. Trump’s enemies list. Iran came across as “reckless,” savage and not to be trusted despite an Obama-era agreement to halt Iran’s nuclear weapons program. North Korea was even more clearly in the president’s cross hairs. He warned that he would “totally destroy North Korea” to defend the United States and its allies, and he again disparaged North Korea’s leader, Kim Jong-un, as “Rocket Man.” He said Mr. Kim was on a “suicide mission for himself and for his regime.”

In all this fury, before a world body whose main purpose is the peaceful resolution of disputes, there was hardly a hint of compromise or interest in negotiations. It’s a telling contrast to President Barack Obama’s approach to many of the same problems in the same setting in 2009. Mr. Obama warned the General Assembly that “North Korea and Iran threaten to take us down this dangerous slope” and must be “held accountable” if “they put the pursuit of nuclear weapons ahead of regional stability.” But he also said he respected “their rights as members of the community of nations” and was “committed to diplomacy that opens a path to greater prosperity and more secure peace for both nations if they live up to their obligations.”

Like Mr. Obama, other presidents have used this setting to talk sternly to adversaries and exhort the world body to do more to confront international challenges. Mr. Trump’s dark tone and focus seemed a significant deviation, not least his relentlessly bellicose approach to North Korea. “No one,” he said, “has shown more contempt for other nations and for the well-being of their own people than the depraved regime in North Korea.”

Iran fared little better under Mr. Trump’s withering assessment. “It is far past time for the nations of the world to confront another reckless regime, one that speaks openly of mass murder, vowing death to America, destruction to Israel and ruin for many leaders and nations in this room,” he said of the Shiite-led government in Tehran. He called the 2015 Iran nuclear deal “one of the worst and most one-sided transactions the United States has ever entered into” and gave a clear signal that he means to back out of it, despite strong evidence that Iran is complying with the terms.

Under law, Mr. Trump is supposed to certify to Congress next month that Iran is still complying, and Tuesday’s comments were the strongest sign that he will not, very likely forcing Congress to deal with the politically contentious issue. If America withdraws from the agreement, it will outrage the other major powers that are party to the deal — France, Britain, Germany, Russia and China — and give Iran an excuse to resume a full-blown nuclear program. Why Mr. Trump would risk that when North Korea’s program is a full-time concern is a mystery.

Mr. Trump’s largely benign comments about the United Nations were encouraging, considering he once condemned it as useless and having no place in his “America First” vision. But his references to the body as a collection of sovereign nations seemed intended for his base, most of which applauds Mr. Trump’s nationalism and much of which suspects the United Nations is bent on establishing a world government.

While Mr. Trump praised the world body for its work with refugees and health and commended the secretary general, António Guterres, for his efforts to reform the institution, he complained that the United States, at 22 percent of the budget, pays “an unfair share of the burden.”

Mr. Obama was not blind to the United Nations’ weaknesses, observing that “this body has often become a forum for sowing discord instead of forging common ground; a venue for playing politics and exploiting grievances rather than solving problems.” And he told members that “responsibility and leadership in the 21st century demand more.” But he was also more committed to multilaterism in general, noting that after the George W. Bush years, his administration had “re-engaged the United Nations. We have paid our bills.”

As to presidential bearing, there was all the difference in the world. Mr. Trump, still obsessed with his victory, asserted that the United States has done “very well” since Election Day and that the military would soon be “the strongest it has ever been.” Mr. Obama spoke of being humbled by the office and determined to “act boldly and collectively on behalf of justice and prosperity at home and abroad.”

Warmongers and Peacemakers at the U.N. - The New York Times
Posted by John H Armwood II at 12:14 PM