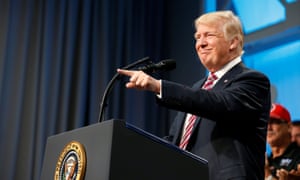 "Donald Trump’s “once-in-a-lifetime” plan to cut taxes for “average Americans” would mainly benefit the richest 1% and deliver only modest cuts for most US households, according to an independent analysis released on Friday.

Trump announced a radical overhaul of the US tax system on Wednesday, claiming the plan would bring relief to middle-class households. But according to a study released by the Urban-Brookings Tax Policy Center, the average cut to most households would be just $1,700 by 2027 – and one in four households would actually pay more tax.

While many of the tax plan’s details have yet to be specified, Trump did propose stopping taxpayers from claiming itemized deductions on their tax returns. If passed, that change would mean taxpayers can no longer deduct state and local property tax deductions from income.

The shift would reduce the tax savings of many middle-class households and mean the majority of households making between $150,000 and $300,000 would receive a tax increase, according to the report.

“Taxpayer groups in the bottom 95% of the income distribution would see modest tax cuts, averaging 1.2% of after-tax income or less. The benefit would be largest for taxpayers in the top 1% (those making more than $730,000), who would see their after-tax income increase 8.5%,” the report calculates.

Trump himself would be a big beneficiary of the plan, despite his claims that the proposals had “very little benefit for people of wealth”. The plan will reduce the tax paid by so-called “pass-through” businesses to 25%. Currently profits from those businesses are taxed at the same rate as the business owner’s personal tax rate, the top rate being close to 40%. Trump owns about 500 such entities.

The plan would also scrap estate taxes, meaning he could pass on his fortune to his family without loss."