Trump and Haley know next to nothing about the Korean Peninsula. They are making matters worse. US must stop North Korea threats, says China, as Kim Jong-un aims for military 'equilibrium' | World news | The Guardian 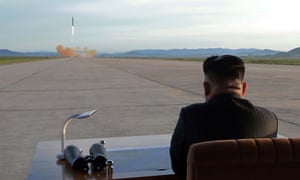 "The United States must stop threatening North Korea’s leader if a peaceful solution to the nuclear crisis is to be found, China’s ambassador to Washington has said, as Kim Jong-un reiterated his country’s aim to reach military “equilibrium” with the US.

Cui Tiankai told reporters in Washington: “They [the US] should refrain from issuing more threats. They should do more to find effective ways to resume dialogue and negotiation.”

“Honestly, I think the United States should be doing … much more than now, so that there’s real effective international cooperation on this issue.”

North Korea’s state news agency, KCNA on Saturday quoted Kim as saying: “Our final goal is to establish the equilibrium of real force with the US and make the US rulers dare not talk about military option.”

The US warned on Friday it could revert to military options if the latest sanctions fail to curb North Korean missile and nuclear tests, after Pyongyang fired a missile over Japan for the second time in two weeks."