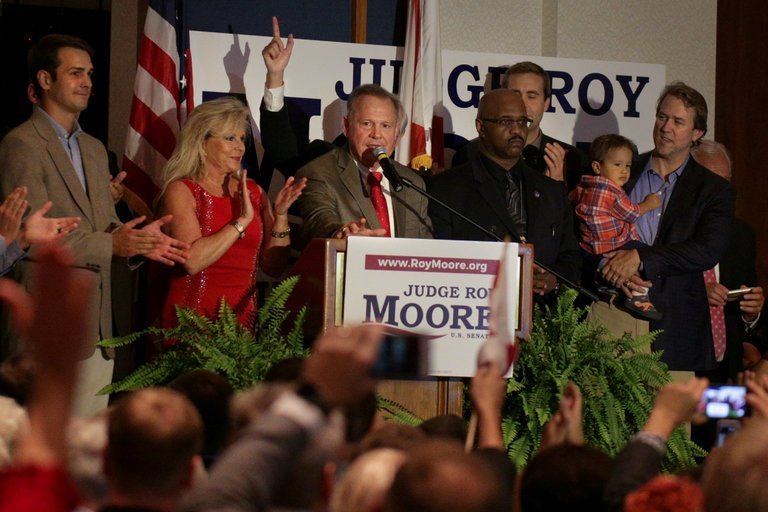 The outcome in the closely watched Senate race dealt a humbling blow to President Trump and other party leaders days after the president pleaded with voters in the state to back Mr. Strange.

Propelled by the stalwart support of his fellow evangelical Christians, Mr. Moore survived an advertising onslaught of more than $10 million financed by allies of Senator Mitch McConnell, the majority leader. His victory demonstrated in stark terms the limits of Mr. Trump’s clout.

Taking the stage after a solo rendition of ‘How Great Thou Art,’ an exultant Mr. Moore said he had ‘never prayed to win this campaign,’ only putting his political fate ‘in the hands of the Almighty.’

‘Together, we can make America great,’ he said, borrowing Mr. Trump’s slogan and adding, ‘Don’t let anybody in the press think that because he supported my opponent that I do not support him.’

winchestereast 46 minutes ago This race was a choice between a religious zealot bigot and a bigot. Both standing against core American Constitutional principles. Six of... cheryl 54 minutes ago I am really trying to wrap my head around the idea of this throwback as the Chief Justice of the Alabama Supreme Court, which he had managed... Jordan Davies 54 minutes ago Is this possible only in Alabama or is it a trend? A homophobe, religious nut, what better for the ultra reactionary Senate. This man is... SEE ALL COMMENTS WRITE A COMMENT "