Dispatch From the Resistance - The New York Times 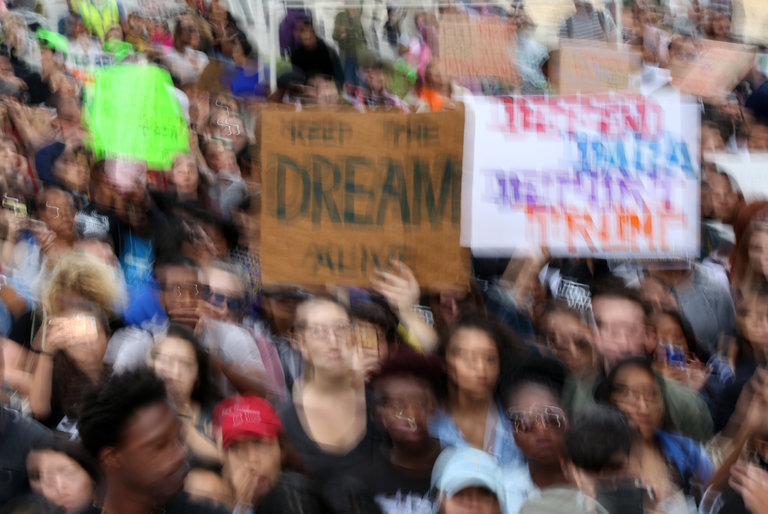 "When Congress has to pass a joint resolution condemning white supremacy and plunk it on the desk of the “president” — in an effort to force him to sign it and daring him not to — you know that we as a country are beyond the pale.

(On Wednesday, the press secretary for the “on many sides” white supremacy sympathizer said: “In terms of whether or not he’ll sign the joint resolution, absolutely. And he looks forward to doing so as soon as he receives it.” Of course, he didn’t really have a choice. A veto would have been the equivalent of burning a cross on the Resolute Desk.)

When Donald Trump’s fraudulent voter-fraud commission openly entertains the loony and unworkable idea of further winnowing the voter rolls by forcing potential voters to undergo the federal background check used for gun buyers, you know that this administration is trying every way it can to ax voter access and re-establish Jim Crow poll tests.

When Robert Mueller is circling this White House like a hawk preparing to descend on a chicken coop, you know that the stench of corruption emanating from this administration reaches to the heavens.

“Republicans close to the White House say every sign by Mueller — from his hiring of Mafia and money-laundering experts to his aggressive pursuit of witnesses and evidence — is that he’s going for the kill.”

I often hear from Trump enthusiasts and accommodators that at some point resistance must submit, that the time for outrage is term-limited, that at a point, complete opposition registers as unfair and unpatriotic.

This always settles on me in a most unsettling way. How is it, precisely, that right becomes less right and wrong less wrong simply by the passage of time and the weariness of repetition?

How is it that morality wavers and weakens, accommodates and acquiesces?

It seems to me the oddest of asks: Surrender what you know to be a principled position because “moving on” and “moderation” are the instruments that polite society uses to browbeat the radical insisting on righteous restoration.

I see no value or honor in this retreat.

I don’t even think my crusade is a personal one, although it must be said that every day that I wake and recall that a bigoted, sexist, intolerant, transphobic scoundrel is president, my stomach turns and my skin crawls.

But there is something far larger than personal feeling at stake here: We are now talking about an administration that is attempting to dramatically reshape the demographics of the eligible electorate, in particular striking at groups who overwhelmingly vote for Democratic candidates and overwhelmingly voted against Trump.

We are talking about the basic concept of whether our government, and by extension our country, advances unity or division, love or hate.

We are talking about an assault on our democracy by a hostile foreign power, the contours and scope of that assault coming into greater clarity every passing day.

We found out this week that not only did Russia use social media bots and fake accounts to spread fake news — apparently all harmful to Hillary Clinton and therefore helpful to Trump — but it also took the extraordinary step of using Facebook to “organize anti-immigrant rallies on U.S. soil,” as The Daily Beast reported.

It is crystal clear what Russia’s motive was: to get Trump elected. As CNN reported this week, Vyacheslav Nikonov, a member of the Duma, the lower house of the Russian Parliament, said on a Sunday political show that to achieve world dominance, “the U.S. overextended themselves.” He went on to say that the intelligence services slept “while Russia elected a new U.S. president.”

How can any of us, if we are true patriots, be expected to simply calm down and suck it up when the Russians are bragging that the “president” of this country isn’t ours but theirs?

How can we be expected to sit idly by while the fabric of this country is unwoven by maleficent hands, whatever their size?

None of this is normal or right, and Trump’s chief of staff, John Kelly, in my opinion, has become one of the most dangerous men in America because he is endeavoring to make the abominable look acceptable. No, thanks, sir, I prefer my disasters not to wear a disguise.

I don’t care if I one day become the last man standing and the last one yelling. I shall remain until the end — mine or Trump’s.

But I know well, and am comforted by the fact, that I am not alone. Millions of Americans see this travesty for what it is and share my disgust and indignation.

Good people of good conscience are seeking to do what Trump only gave lip service to, and in his way bastardized. We, patriots, will not stop resisting this destruction. It is we who will Make America Great Again by trying to limit the damage Trump can do to us until he feels the reckoning of the damage he has done to himself."

Dispatch From the Resistance - The New York Times
Posted by John H Armwood II at 11:57 AM