AMERICA WAS NEVER WHITE. AND IT NEVER WILL BEBY JOE KRULDER 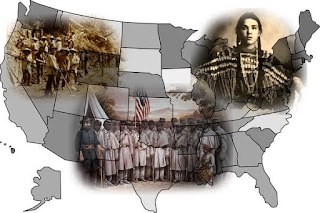 "Among the many problems I have with so-called “white supremacists” is their purposeful mixing of “heritage” with “history,” rhetorically pining for a once proud “white” America.

But history proves that America was never white.

"That I need to make this statement, and worse, that some may take offense from it, shows the blurring rhetoric between what is Heritage and what is History. I’ll return to this later. For now, some history.

The first successful colonial holding in these current United States was Spanish, at St. Augustine, Florida, established 1565, four decades plus prior to Virginia’s Jamestown.

Speaking of Jamestown, the first Africans were brought into Virginia on a Dutch trading ship in 1619, a year before Pilgrims landed in Plymouth Rock, Massachusetts.

And nearly half of those Pilgrims could not speak English. Of the near half that couldn’t, most spoke Dutch, with a scattering of German and French. America from the get go was not an English-speaking nation.

When the Puritan, William Bradford, arranged the first Indian Treaty signing in 1621, it was with Massasoit, a Pokanoket of the Wampanoag Confederacy. At this time, depending on which archeologist you ask, the native population of North America was anywhere between 8 to 20 million.

English speakers? Less than a thousand.