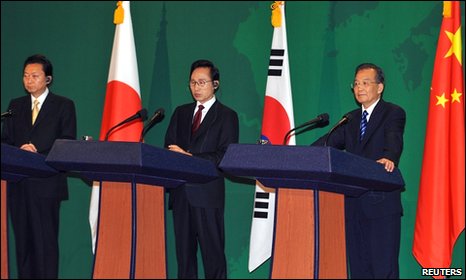 At the end of the three-way conference between President Lee Myung-bak of South Korea, Yukio Hatoyama, the Japanese prime minister, and Wen Jiabao, the Chinese premier, a great many people here must have been hoping to hear Mr Wen criticise North Korea for allegedly torpedoing the South Korean naval ship Cheonan two months ago.
At the very least they would have wanted him to accept publicly that North Korea had been responsible for it, as an international inquiry has maintained. If so, it was one of the most dangerous acts of war in the Korean peninsula in recent years.
Mr Wen refused. He sent his condolences to the families of the 46 South Korean sailors who were killed. He called for restraint. He hinted at the dire consequences of war. More..._
___________________________________________________
This is an excellent analysis of why China has refused to condem North Korea's torpedo attack on the South Korea ship Cheonan.

China is ruthlessly acting in its own self interest, which it sees as maintaining regional stability at all costs.  Many followers of the two previous leftist Korean governments have looked to China, more than the United States as their model and future ally.  This incident should give the Korean left reason to pause and revaluate their position.  China's interest and South Korea's interest diverge when it comes to North Korea while the United States remains South Korea's defender and strongest ally. Recent polls show an increase in support for Korea's conservative president Lee Myung-bak. Maybe the reality that North Korea is still a real threat is being better understood by otherwise skeptics of the current administrations more hardline polices.  I am afraid however that many on the Korean left will simply blame this crisis on Mr. Lee's tougher stance towards North Korea.
John H. Armwood
Posted by John H Armwood II at 2:37 PM