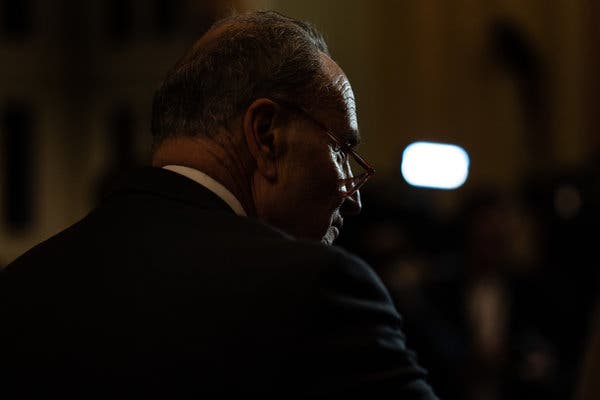 WASHINGTON — Senator Chuck Schumer had a pointed warning when John R. Bolton declared himself willing to testify in President Trump’s impeachment trial: Republicans who refused Democrats’ demands for witnesses and documents would be “participating in a cover-up.”

For Mr. Schumer, the voluble New York Democrat and minority leader, the resurfacing of Mr. Bolton, the former White House national security adviser, as a potential witness was a way to squeeze vulnerable Republicans like Senator Susan Collins of Maine to cross party lines and effectively give him control of the floor during a historic trial over whether to remove Mr. Trump. But Ms. Collins, who is a top Democratic target facing a tough re-election in November, quickly made it known she did not find Mr. Schumer’s tactics persuasive.

Ms. Collins’s sharp retort illustrates Mr. Schumer’s core challenge as the Senate, likely this week, convenes only the third impeachment trial of a sitting president in American history. As leader of the opposition, he must hold together Senate Democrats (including five who are running for president) while securing the cooperation of some of the very same Republicans he is working to defeat.

For Mr. Schumer, who has spent three years as the Senate’s top Democrat in the shadow of his House counterpart, Speaker Nancy Pelosi, the impeachment trial of Mr. Trump is both an opportunity and a risk.

It is no secret in the capital that the job Mr. Schumer really wants is that of Senate majority leader — a post he thought would be his with Hillary Clinton in the White House, before Mr. Trump’s 2016 victory unleashed a political earthquake. A schmoozer and a deal-maker, he is more suited to the politics of getting things done than to the partisan knife-fighting culture of Mr. Trump’s Washington.

“I think it’s very hard for him to be the leader of a resistance,” said Rebecca Kirszner Katz, a progressive strategist and aide for Mr. Schumer’s predecessor, Harry Reid. “The weekend that millions of women took to the streets to protest Trump, Schumer went to the Women’s March, and the next day had a press conference on the size of overhead bins on airplanes. The world was falling apart, but Chuck Schumer was still doing his Sunday press conferences.”

Over the past few weeks, as Ms. Pelosi and Senator Mitch McConnell, Republican of Kentucky and the majority leader, engaged in a bitter standoff in recent weeks over the shape of the trial — the speaker refused to send the articles, while Mr. McConnell refused to commit to hearing any new evidence in the Senate — Mr. Schumer was still pushing daily for a deal with Republicans to hear from witnesses and secure more documents.

Mr. Schumer lost that round, when Mr. McConnell announced last week that he had the votes lined up to move ahead with the trial without committing to either. Now, the Democratic leader faces a more consequential set of tests once the trial gets underway. Mr. Schumer said he plans to force a series of votes on calling witnesses and hearing new evidence, pressuring Republicans to join the call for more information or be tagged as complicit in what Democrats have branded presidential obstruction.

There is some evidence the strategy is working: On Friday, Ms. Collins said she was working with a “fairly small group of Republicans” to ensure that witnesses could be called.

The Senate math is not in Mr. Schumer’s favor. With 47 senators caucusing with the Democrats (including two independents who routinely vote with them), he is still four shy of the 51 votes he would need to force subpoenas for witnesses and documents. While it appears that Ms. Collins and two other Republicans — Senators Lisa Murkowski of Alaska and Mitt Romney of Utah — might be persuaded to go along in voting to hear from Mr. Bolton and others, Mr. Schumer was hard pressed to name a fourth vote.

In the end, Mr. Schumer knows there is almost no chance the Republican-led Senate will convict Mr. Trump for pressuring Ukraine to investigate his political rivals, a move that would take two-thirds of senators, or 67. But the focus on what constitutes a fair trial, he argued, will either succeed in unearthing new information about Mr. Trump, or at least help Democrats pick up seats in 2020.

“It’s a win-win,” he said, describing his strategy, though he quickly corrected himself, settling on “no lose” as a better frame. If Republicans block new evidence, Democrats will deem the trial “illegitimate and a sham,” he said, adding, “Pursuing witnesses and documents makes us better off, no matter the outcome.”

The position is at odds with the one Mr. Schumer took almost exactly 21 years ago, when he opposed calling witnesses during the impeachment trial of President Bill Clinton. (Mr. Schumer likes to recount his status as, in his own words, a “historical footnote”: the only member of Congress to have voted three times against Mr. Clinton’s impeachment — twice as a House member in 1998, first in the Judiciary Committee and then on the floor, and again after winning election to the Senate.)

Mr. Schumer argued that there was no contradiction. Unlike the witnesses he is seeking against Mr. Trump — including Mr. Bolton and Mick Mulvaney, the acting White House chief of staff — the Clinton witnesses had already testified, so there was not necessarily anything new to be learned from them. By contrast, Mr. Trump directed a blanket stonewall of the House impeachment inquiry, refusing to provide any documents or allow White House officials to testify.

Republicans, however, howl that he is being hypocritical. They say Mr. Schumer is engaged in a transparent bid to play politics with the most sacred of senatorial duties. As to whether he will get four Republicans on board on key questions of how the trial should unfold, Senator John Kennedy, the Louisiana Republican known for his folksy quips, said: “When donkeys fly.”

But Senator Chris Van Hollen, Democrat of Maryland, said Mr. Schumer had “played the hand he has very well.”

“There’s a reason President Trump and Mitch McConnell are deathly afraid of having key witnesses, because it can change the dynamics of a trial,” Mr. Van Hollen said. “And the flip side of that is that if Republicans vote to block key witnesses and evidence, it will expose the trial as a fraud.”

At 69, Mr. Schumer has spent his entire adult life in politics. The son of a Brooklyn exterminator and a homemaker, he caught the politics bug in 1968 as a Harvard undergraduate campaigning for Eugene McCarthy, and disappointed his parents by running for the New York State Assembly at 23, fresh out of Harvard Law. (At his mother’s insistence, he took the bar exam, but he never practiced.)

He won that race and every race since, winning election to the House in 1980, the Senate in 1998 after a hard-fought campaign in which his opponent, the incumbent Republican senator Alfonse M. D’Amato, memorably called him “a putzhead” — a Yiddish insult that was a bridge too far for New York voters.

With his familiar Brooklyn accent and half-moon glasses perched on the downslope of his nose, Mr. Schumer has long been an upbeat, if publicity-hungry, figure in the Capitol, giving rise to the well-worn joke that there is no place in Washington more dangerous than between him and a camera.

Naturally gregarious, Mr. Schumer loves legislating — he once briefly contemplated running for governor but decided against it — and retail politics. He visits each of New York’s 62 counties once a year, can tick off Long Island high schools by name and knows the best place in Buffalo for a “beef on weck” sandwich.

There is a little bit of Senator Pothole in him. His political modus operandi is as follows: Fix someone’s problem (any problem, doesn’t matter what, so long as it helps the middle class), and then hold a Sunday morning news conference in New York to talk about it. He has done all this while raising millions of dollars from his hometown industry — Wall Street — prompting criticism that he is a corporate politician, out of step with the rising Democratic left.

To say he is a hands-on leader would be an understatement; when his 96-year-old father was rushed to the hospital with an acute attack of gallstones a few Saturdays ago, Mr. Schumer was dialing up colleagues on his flip phone to give them advice about Sunday morning talk show appearances. But his close friends say he never had a grand plan to rise up the ranks.

“There was no long term strategy: I’m going to wait X years in the House and then I’m going to the Senate,” said Carol Kellermann, who has known Mr. Schumer for 50 years, since their days at Harvard, and later was his chief of staff. Still, she added, “I think he wishes that he would be the majority leader. That would be a capstone of all the legislative work he has done.”

Mr. Trump’s election in 2016 left the ordinarily cheery Mr. Schumer moping around his Brooklyn apartment. But the New York senator, who is Jewish, said he soon had “an epiphany, a message from the heavens, if you will, because I believe in God.”

“Chuck, stop moping,” he said he told himself. “Had Hillary been president and you in the majority, the job would have been easier, more fun, and you would have gotten good things done, which is why you’re here. But with Trump as president and you as minority leader, your job is much more important.”