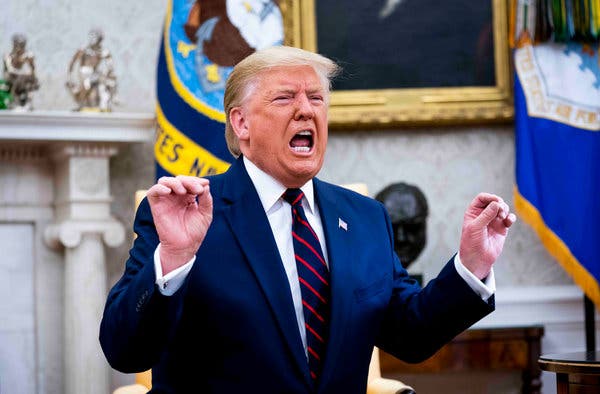 "On Wednesday I watched Donald Trump in the Oval Office, while seated next to the Finnish president, take questions from reporters in what can only be described as the unhinged rantings of a desperate man melting down, spiraling out of control and lashing out.

Over the last few years, and particularly since the Robert Mueller investigation concluded, I have grown accustomed to Trump delivering his insults, launching his attacks and spewing his lies with a swaggering smugness.

This was not that. What was on display Wednesday was anger animated by panicked fear.

And at another news conference with the Finnish president, Trump repeated his stupefying performance, rambling and raving, dodging questions and misdirecting attention. And, of course, lying.

Donald Trump is scared. And he is incensed that he is scared. And his only impulse is to fight like a thing near death: with everything he has, and by all means necessary.

Trump is now on a warpath against everything that threatens him. The whistle-blower is now the “#FakeWhistleblower” whom he wants to identify and “interview.” Anyone who spoke with the whistle-blower is “close to a spy,” and Trump said: “You know what we used to do in the old days when we were smart with spies and treason, right? We used to handle it a little differently than we do now.”

He has suggested that Adam Schiff is criminal and even treasonous. He has called the impeachment inquiry a “coup.” And, he has quoted someone who said that removing him from office “will cause a Civil War like fracture in this Nation from which our Country will never heal.”

This will not end well. There is nothing Trump hates and fears more than being publicly chastised and embarrassed. He has always believed that he could control the narrative even if he couldn’t control the facts. Facts don’t really matter to the man.

The presidency has many powers, awesome powers, but Congress also has powers, and impeachment is one of them. Trump is likely to become only the third president to be impeached and the first to be impeached over his dealings with a foreign government, one of the things the framers of the Constitution feared most.

This is outrageous to Trump, a man who has patterned his entire presidency as a rebuke to and competition with his predecessor, Barack Obama. Not only will Trump not get a Nobel Peace Prize, he’ll get an American badge of dishonor. A black president of decency will trounce the president of white supremacy.

This fact alone is no doubt pushing Trump to the verge of explosion.

He will do anything to avoid this. But this may now be all out of his hands. The whistle-blower complaint has been filed and its credibility bolstered by Trump’s own statements, the rough transcript memo released by the White House and confirmations from the White House.

There are other things we want and need to know, to be sure, because there may well be other abuses of power about which we are still unaware. But the basis for at least one article of impeachment has already been established: abuse of power. The House could vote on that one any day it wished.

In fact, paradoxically, the longer Democrats drag out their investigation to strengthen their case, the more time Trump will have to muddy the waters with lies and conspiracies, possibly weakening that case, with the public at least.

We have to remember that Trump isn’t a politician who entered the arena with a deep desire to serve and with appreciation for the country’s history, customs and institutions.

Trump ran for president as an exercise of self-flattery and to boost his brand. His win was surprising, even for him. So we should never expect him to be patriotic when he is being condemned.

Before Trump will allow himself to be chased from the temple, he’ll bring it down."

Opinion | Donald Is Desperate - The New York Times
Posted by John H Armwood II at 6:30 AM