'Do not tweet': Pelosi scolds progressives in closed-door meeting 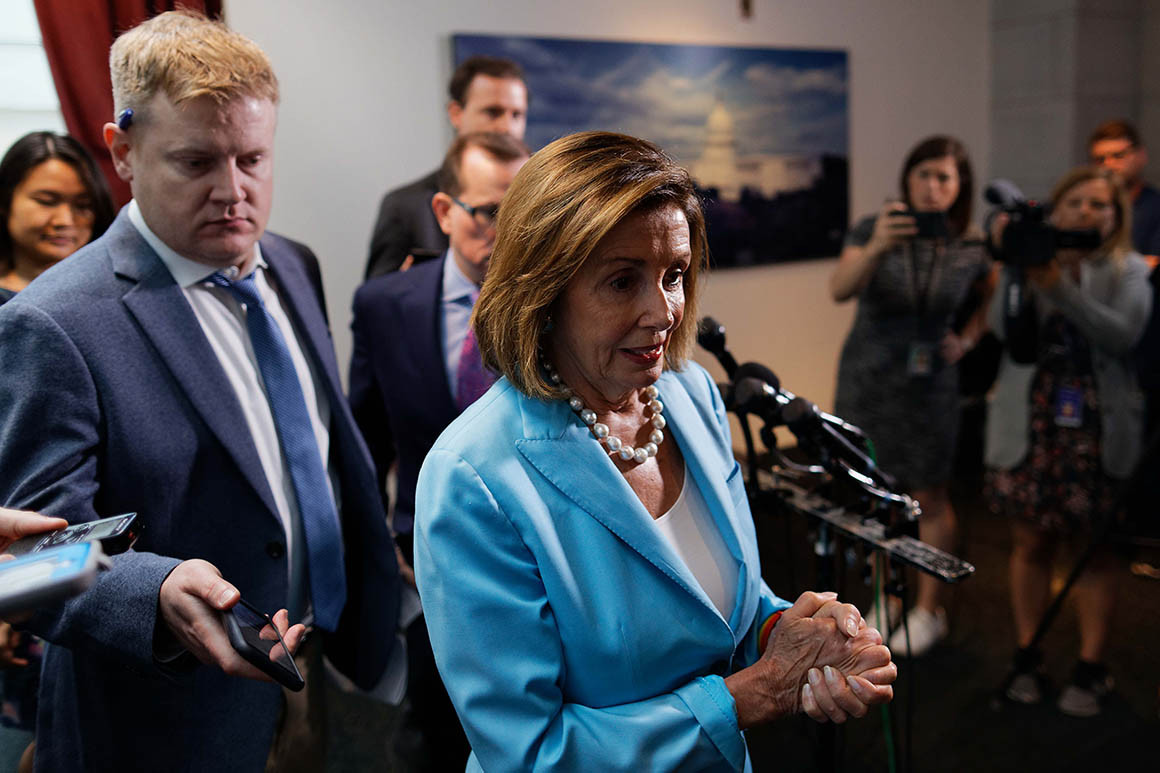 "The people of their districts elected the representatives, not would be "Trump", dictator Pelosi who like Trump cares about primarily dollars and power.  She has admitted her love for raising fundraising while she opposes  her Constitutional duty to impeach Trump.

"Speaker Nancy Pelosi chided progressives in a closed-door meeting Wednesday, calling on them to address their intraparty grievances privately rather than blasting their centrist colleagues on Twitter.

Pelosi’s comments, which were described as stern, came during the first full caucus meeting since a major blowup over emergency border funding last month between progressive and moderate lawmakers as well as a recent spat with Rep. Alexandria Ocasio-Cortez (D-N.Y.) and her freshman allies.

"So, again, you got a complaint? You come and talk to me about it," Pelosi told Democrats, according to a source in the room. "But do not tweet about our members and expect us to think that that is just OK."

Democrats in the room said they interpreted that remark, in part, as a shot at Rep. Mark Pocan of Wisconsin and co-chair of the Congressional Progressive Caucus, who called moderate Democrats members of the “Child Abuse Caucus” in a tweet over their support for the Senate’s version of the emergency humanitarian package.

But a Pelosi spokesman said the speaker’s comments were about the use of Twitter in general and not targeted at any individual member.

Pocan, who was not in the meeting, said Pelosi personally phoned him later Wednesday afternoon to apologize that it had been seen that way.

“She didn’t even know about my tweet, and she wasn’t referring to it,” Pocan said. "She’s not a shy individual. If she wants to tell you something, she’ll tell you. She actually called to say just the opposite."

Speaking behind closed-doors Wednesday morning, Pelosi also gave an emphatic defense of the moderates in the caucus, according to multiple sources, telling the room that they’re critical to holding the House majority. Pelosi told Democrats not to make the Blue Dog Coalition their targets, but criticize her publicly if they need to go after someone.

“I’m here to help the children when it’s easy and when it’s hard. Some of you are here to make a beautiful pâté but we’re making sausage most of the time,” Pelosi told the caucus.

The California Democrat added that when her members target her, it helps fundraising, eliciting a big laugh inside the room.

“We are a family, and every family has its moments,” the speaker said.

Pelosi also indirectly criticized Ocasio-Cortez’s chief of staff, according to Democrats in the room, as she told members to tell their staffers to “think twice” before they tweet.

Saikat Chakrabarti, Ocasio-Cortez’s chief of staff, went after Pelosi in a series of tweets over the weekend, criticizing everything from her comments on the squad to her stance against impeachment. Chakrabarti also tweeted scathing criticism of the Blue Dogs, calling them the "New Southern Democrats."

"They certainly seem hell bent to do black and brown people today what the old Southern Democrats did in the 40s," Chakrabarti wrote on Twitter before deleting the post.

Her remarks also come after Pelosi dismissed Ocasio-Cortez and the other members of the progressive “squad” in an interview with The New York Times over the weekend.

Pelosi questioned the group's actual influence, given that its members were the only four Democrats who opposed the House’s original humanitarian package. Ocasio-Cortez and the other progressives — Reps. Rashida Tlaib of Michigan, Ilhan Omar of Minnesota and Ayanna Pressley of Massachusetts — quickly fired back, criticizing Pelosi’s remarks in a series of tweets.

Ocasio-Cortez didn’t address Pelosi’s speech as she left the caucus meeting, instead talking about the annual defense authorization bill that will be on the House floor this week.

But Omar defended her allies, saying she and other Democrats can vote however they want.

“I hope that leadership understands their role and understands what our role is,” Omar said.

Some of the moderates who felt targeted by Pocan’s tweet also spoke up in the caucus meeting, including Rep. Abigail Spanberger of Virginia, who belongs to the Problem Solvers Caucus that Pocan derided as child abusers.

As a former federal law enforcement agent who focused on child trafficking, Spanberger said she was horrified that a fellow Democrat would compare members of his own party to child abusers, according to multiple people in the room.

Speaking to reporters later Wednesday, Pocan did not back away from his criticism of the bipartisan Problem Solvers Caucus, which had taken credit for helping scrap the House’s more liberal version of a humanitarian border package last month.

“I know there are some people in the Problem Solvers Caucus that feel a little stung, because they got yelled at last weekend by constituents,” Pocan said, referring to recent town hall meetings held by moderates in their districts. “I understand why they’re upset, but they should be upset, because they got in trouble last week.”

Pelosi’s speech is part of an effort by Democratic leaders to knit the party back together after the bitter border funding fight last month.

Shortly before the July Fourth recess, moderate Democrats moved to block further consideration of the House border bill — which had additional protections for migrant children — after it became clear the GOP-controlled Senate would not take it up.

House Majority Leader Steny Hoyer (D-Md.) also delivered a forceful speech on Wednesday preaching unity within the caucus and urging members to speak directly with each other rather than publicly — a sentiment that some lawmakers privately mused could also have been directed at Pelosi after her critique of the caucus' freshman firebrands.

"If we have problems with each other, we ought to address each other," Rep. John Yarmuth (D-Ky.) said of Hoyer's message.

After Pelosi and Hoyer's remarks, another moderate, Rep. Henry Cuellar (D-Texas), spoke up to complain that lawmakers shouldn't attack each other unless they're paying party dues.

"If somebody has a problem, pay your dues before you start attacking other Democrats," according to a source in the room.

Some progressive members had privately discussed not paying dues to the caucus' fundraising arm earlier this year after officials announced contentious new policies that made it tougher for primary challengers to attract talented consultants."