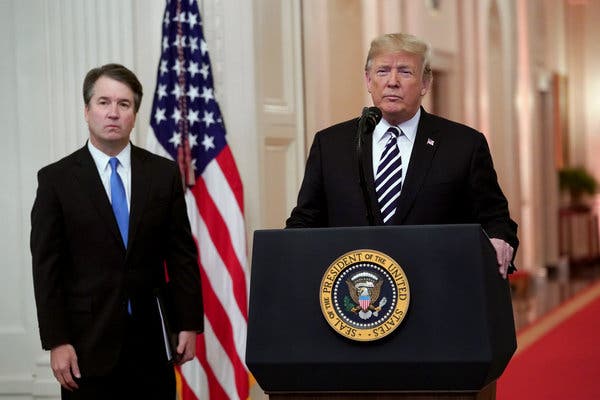 President Trump apologized to Brett Kavanaugh and his family during a swearing-in ceremony on Monday.

During the swearing-in of Justice Brett Kavanaugh on Monday, Donald Trump took it upon himself to apologize to Kavanaugh and his family “on behalf of our nation” for the “terrible pain and suffering you have been forced to endure.”

He repeated the tired lines that he and Republicans hope will stick, and steer the comatose base to electoral fervor: That accusations of sexual assault against Kavanaugh were part of a “campaign of political and personal destruction based on lies and deception” and that “what happened to the Kavanaugh family violates every notion of fairness, decency and due process.”

But to me, this was not just a president and party worried about an approaching “blue wave” and trying to take political advantage of a moment of victory. It was also an outright and increasing amplification of a reactionary white male victimization syndrome that has consumed modern American conservatism.

Vox has called it “the unleashing of white male backlash.”

The women accusing the white man of assault weren’t the victims; instead, the white man was the victim. In some people’s eyes, he was the victim of political correctness, #MeToo’s overreach, a check-your-white-male-privilege culture drunk on its own self-righteousness.

During Kavanaugh’s hearings, Lindsey Graham had the temerity to say, “I’m a single white male from South Carolina, and I’m told I should shut up.”

The evocation of his white maleness in his argument was an overt shot at the check-your-privilege crowd.

Kavanaugh’s belligerent defense and Trump’s dismissal of the accusers — he mocked one at a political rally and called the accusations a hoax — represent for many men a back-against-the-wall, no-more-space-to-retreat moment of fighting back, of pushing back, of standing proud in their patriarchy and proclaiming that it will not bend.

They’re saying, “Enough.” They will cede no more ground, they will share no more power, they will accommodate no more ascendancy and validation of the oppressed. That is what they are telling us, and they are speaking through Trump.

As MarketWatch pointed out in June: