The Senate: Affirmative Action for White People And why it’s time to make Puerto Rico and Washington, D.C., the 51st and 52nd states. 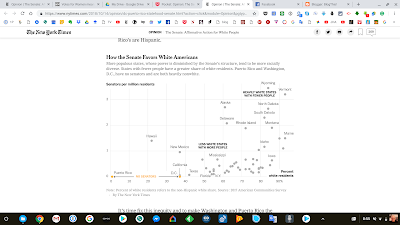 
The Senate: Affirmative Action for White People
And why it’s time to make Puerto Rico and Washington, D.C., the 51st and 52nd states.

The biggest racial preferences in this country have nothing to do with college admissions or job offers. They have to do with political power. And they benefit white Americans, at the expense of black, Asian and Hispanic Americans.

These racial preferences are the ones that dictate the makeup of the United States Senate. Thanks to a combination of historical accident and racism, the Senate gives considerably more representation to white citizens than to dark-skinned ones. It allows a minority of Americans — white Americans — to wield the power of a majority.

The anti-democratic tendencies of the Senate are well known: Each citizen of a small state is considered more important than each citizen of a large state. It’s a deliberate feature of the Constitution, created to persuade smaller states to join the union. Over time, though, the racial edge to the Senate’s structure has become much sharper — for two big reasons.

First, the states whose populations have grown the most over time, like California, Texas, Florida and New York, are racially diverse. By contrast, the smallest states, like Wyoming, Vermont, the Dakotas and Maine, tend to be overwhelmingly white. The Senate, as a result, gives far more special treatment to whites than it once did.

The second reason is even more frustrating, but it would also be easier to fix. Right now, about four million American citizens have almost no congressional voting power, not even the diluted power of Californians or Texans. Of these four million people — these citizens denied representative democracy — more than 90 percent are black or Hispanic.

It’s time fix this inequity and to make Washington and Puerto Rico the 51st and 52nd states, with full representation in the Senate and the House. A few years ago, this idea would have seemed radical (or at least it least it would have outside of Washington and Puerto Rico, where it’s long been popular.) But it is now starting to get more attention, and it deserves to. Those four million American citizens deserve to be treated as American citizens.

I know that some Republicans will claim that adding two states is just a ploy to help the Democratic Party. But if the people of Washington and Puerto Rico want to be represented by Democrats, they should have that right. Plus, they might sometimes choose Republicans, as the conservative pollster Patrick Ruffini has suggested. Puerto Rico’s current (nonvoting) member of the House of Representatives is a Republican, Jenniffer González-Colón.

Adding two new states is a far more achievable idea than many of the other democratic reforms being bandied about these days, like Supreme Court term limits. Granting statehood has been a regular part of this country’s history. It happened in every decade from the Constitution’s ratification in the 1780s through the 1910s, when Arizona and New Mexico joined. Then it happened again in 1959, with Alaska and Hawaii. That most recent expansion was now 59 years ago, which means the country has never gone so long without adding a new state.

If you think about the four youngest states — Arizona, New Mexico, Alaska and Hawaii — you may notice a pattern. Like Puerto Rico and Washington, they are home to a lot of nonwhite people, which is not a coincidence. This country has historically been slow to grant full enfranchisement to people with darker skin. Try to imagine if the four million people who lacked Senate representation today were upper-middle-class white suburbanites. Or imagine the Fox News outrage if they were white evangelicals. They’d have a legitimate grievance, too.

To measure the gap between the political power that the Senate currently bestows on white and nonwhite citizens, I did a little math. I started by calculating the number of senators per million people for each state and territory — numbers that you can see in the chart above. I then looked at the ethnic breakdown of each state and territory to create a nationwide senators-per-million-people average for each major ethnic group. The average for black Americans, for example, takes into account how many live in California, Texas, Wyoming, Washington, D.C., and so on.

Granting statehood to Washington and Puerto Rico would not erase these racial gaps, not even close. The small states that control the Senate would still be overwhelmingly white. But adding two new states would make a meaningful dent — and make this country a fairer place. It would help revive the basic ideals of American democracy, which could very much use some reviving."