Remembering a past many Americans would rather forget - The Washington Post 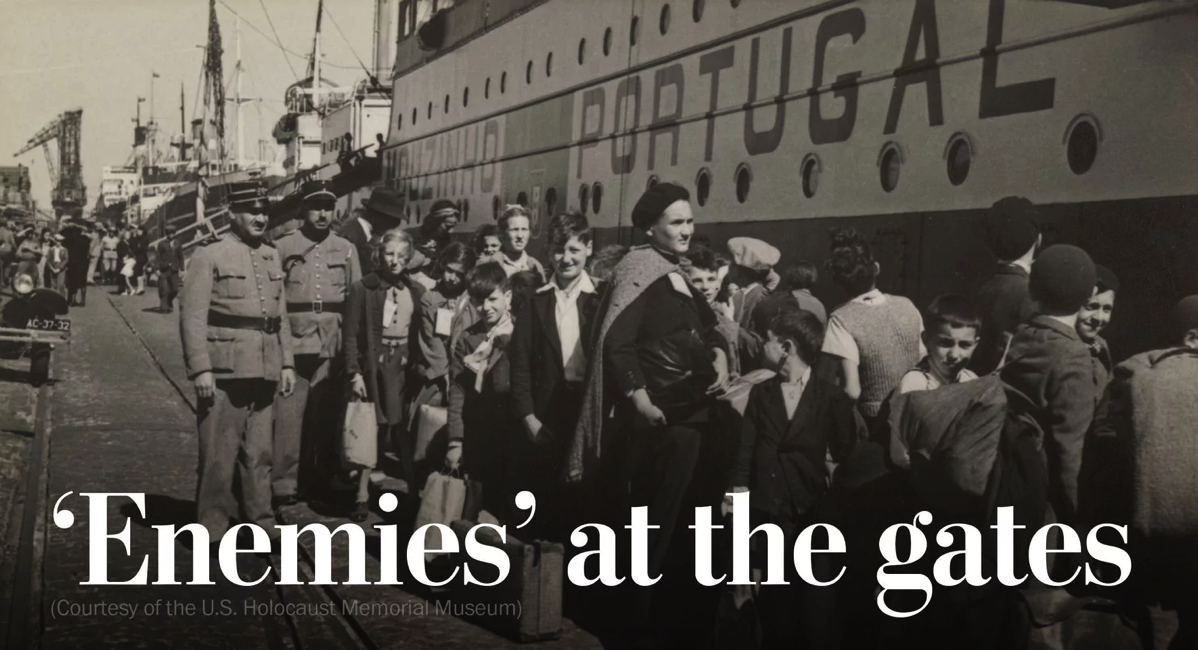 "A prominent congressman blames a lack of jobs for Americans on millions of immigrants. A far-right hate group accuses leftists and minorities of trying to suppress its freedom of speech. And, before thousands of cheering supporters, a populist orator asks his supporters to help “restore America to Americans.”

These could easily be contemporary headlines in the United States — but they’re not. All of these events took place in the 1930s, and I encountered them on newsreel footage that is part of a new exhibit at the United States Holocaust Memorial Museum in Washington.

“Americans and the Holocaust” is a comprehensive accounting of the political conversation in the United States as the country observed the run-up to World War II in Europe and then entered the epochal conflict. America’s role in defeating the Axis powers and liberating Nazi death camps dominates the country’s perception of the war. But, as the exhibit makes clear, popular imagination has glossed over a far more troubling and complicated history.

The exhibit commences in the early 1930s, with American society ravaged by economic woes, chronic unemployment and racial tensions. It goes on from there, charting the political battles between isolationists and internationalists, communist sympathizers and zealous Christian campaigners, Jewish civil-society groups and the early proponents of “extreme vetting.” Ethnic Germans hold pro-Nazi rallies in U.S. cities; anti-Japanese agitators sport pins and tout licenses authorizing them to “hunt Japs” on U.S. soil.

There was rampant fear, particularly about immigrants and refugees. Popular media was suffused with warnings and stories of a dangerous “fifth column” of alien undesirables stealing into America. Lawmakers described unemployment as a problem “transferred from foreign lands,” urging deportations of foreign-born workers taking American jobs.

Even children were not exempt, as shown by a letter to the editor published by The Washington Post in 1939 criticizing a thwarted plan to shelter thousands of Jewish children from across the Atlantic. “There are many times 20,000 children in the country with no future! Help the American child,” it read. “He deserves our help more than the German child.”

There was certainly some sympathy for Jews and other persecuted groups, but American officials hardly took heroic steps to act on it. The exhibit showcases letters and petitions sent in support of granting visas for European Jews, along with the correspondence that came back rejecting or advising against these applications. Albert Einstein, the great German-born scientist who eventually found safe haven in America, bemoaned how Washington sought to “make immigration impossible by erecting a wall of bureaucratic measures.”

Between 1933 and 1938, the United States permitted a maximum of 25,957 visas to be given to German-born individuals each year. In practice, it issued far fewer. And even after the horrors of the Holocaust were exposed and the war ended, only 5 percent of Americans in 1945 believed it was right to expand refugee quotas.
The echoes of the present are so loud they barely need be mentioned. Politicians, from the White House down to the lowest offices, have railed against the supposed threats of immigration to America, whether economic, demographic or terrorism-related. As the war in Syria drags on and global humanitarian crises have mounted, the United States has lowered its refugee quotas and ground the admission of Syrian asylum seekers to a standstill. Anti-Semitism has again become a disturbingly regular feature of politics.

Both then and now, America's apathy and wariness did not come from a lack of information. The exhibit's curators combed archives to show how coverage of Nazism and the threat of the Third Reich appeared in newspapers around the country. “Antisemitism is the life and soul of Hitler’s movement,” wrote correspondent Dorothy Thompson in a famous 1932 profile of Hitler in Cosmopolitan magazine. “The Nazis lose no opportunity to insult the Jews.”

But rather than reacting with horror, many Americans nodded along. The Rev. Charles Coughlin, an influential priest whose Detroit-based radio show was syndicated nationally, pumped a steady diet of anti-Jewish rhetoric into the American body politic. “We have lived to see the day that modern Shylocks have grown fat and wealthy, praised and deified, because they have perpetuated the ancient crime of usury under the modern racket of statesmanship,” Coughlin once said.

He defended the Nazis after the Kristallnacht pogrom against Jews throughout Nazi Germany in 1938 and, not unlike his descendants on right-wing American talk radio today, focused his ire on devious atheists, leftists and foreign interlopers. At a rally of close to 20,000 people in New York City, Coughlin urged his supporters to work to “restore America to Americans.” His brand of isolationism, shared by the like-minded America First committee, would die out over the course of the war. But his arguments carry the very vocabulary of Trumpism.

As an institution, the Holocaust Museum in Washington feels a responsibility for the present — for example, its scholars warned of the threat of ethnic cleansing in Burma long before last year's rampages against beleaguered Rohingya Muslims.
“There is no doubt that we see rising forms of hate, anti-Semitism and extremism in the world today,” the exhibit’s curator, Daniel Greene, told Today’s WorldView. “Engaging with this particular history provides an opportunity for visitors to think about these dangers and our own roles and responsibilities as citizens today.”

These painful reckonings are only slowly taking place in America. My colleagues reported last month on the stunning new National Memorial for Peace and Justice in Montgomery, Ala., which forces the visitor to confront the brutal history of white people lynching black people, a legacy of racial terrorism that preceded decades of legalized inequity in the American South. “We’re not doomed by this history. We’re not even defined by it,” the monument's creator, Bryan Stevenson, told The Post's Fred Hiatt. “But we do have to face it.”

Remembering a past many Americans would rather forget - The Washington Post