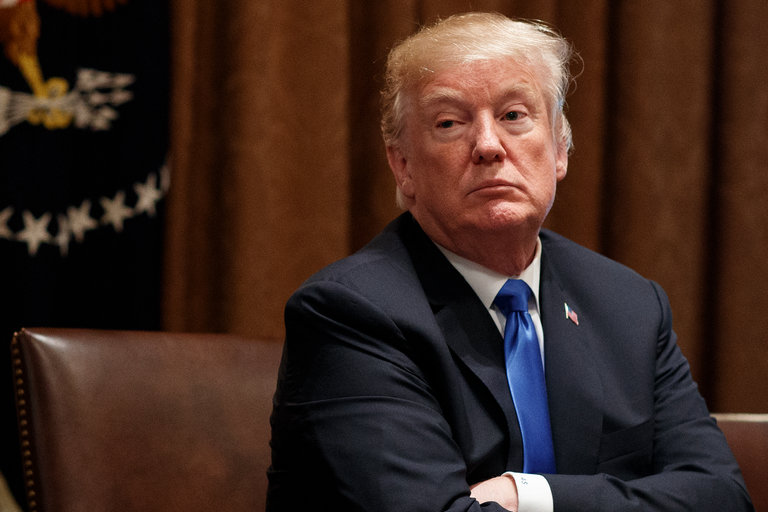 That seemed to be the descriptor most tossed around last week to capture the circus around Donald Trump.

But I think chaos is the fruit of this poison tree, not the root of it. That is to say that I don’t believe that Trump desires chaos because he feels most at peace when the world around him is experiencing pandemonium.

Rather, I believe that this chaos is the perpetual result of the absolute incompetence and idiocy of a preening philistine who has faked his way through life pretending that he knows more than he does and is tougher than he is.

He has two diametrically opposed impulses.

On the one hand, he latches on to outlandish ideas, or simple, emotional aspects of complicated issues, or conspiratorial drivel, and he vests the whole of his emotional energy into proving their veracity, often against overwhelming evidence to the contrary. President Obama wasn’t born in America. Obama used the F.B.I. to spy on him. There were good people on both sides in Charlottesville. The “fake news media” is the enemy of the American people. The whole Russia investigation is a hoax. He’s doing a good job as president.

On the other hand, and with other issues, his convictions are not fixed at all, but ephemeral and fleeting, changing from moment to moment, like the pattern of fog on a glass.

This is when you can see that he is clearly faking it. He wants so desperately to be right that he says whatever his audience — whether that be a small group or a filled arena, whether that be members of Congress or fans at a rally — want to hear and will respond to.

This is how you can get wildly vacillating positions and bold, empty promises in bipartisan meetings with the man — whether those meetings are about addressing DACA and immigration or about addressing gun control after the school shooting in Florida.

And one thing that clearly comes across in those meetings is how much he talks rather than listens. It’s all about what he believes, what he would do, how courageous he is, how conciliatory he is, how smart he is about the subject.

That is precisely how you know that none of it is true, and that he is simply stringing together a jumble of words into conflicting ideas. You see a fear of being exposed as an idiot and fraud. As Friedrich Nietzsche once put it: “Talking much about oneself can also be a means to conceal oneself.”

So Trump simply bulldozes his way through, boasting and bragging, distracting and dissembling, making promises without making sense.

People used to dealing with a sane, logical person who generally doesn’t lie and generally makes sense are left scratching their heads, wondering whether to believe what they have heard, whether to make plans and policies around it.

Believing anything Trump says is a recipe for a headache and heartache. The old rules no longer apply. We see the world as through a window — as it is, even if we are a bit removed from the whole of it.

Trump sees it as if in a house of mirrors — everything reflecting some distorted version of him. His reality always seems to return to a kind of delusional narcissism.

The only way that a person can live out a life in this fashion is to be a liar and a fraud. That’s why the majority of Americans find him unlikable and unfit. Character still matters.

The great danger in all of this is that a man who knows little but is pretending to know much can easily be manipulated by those who know more.

For instance, according to The New York Times, leading up to Trump’s hurriedly announcing his potentially disastrous steel and aluminum tariffs:

“Supporters of the tariffs have begun broadcasting televised ads in recent days during programs that Mr. Trump has been known to watch. One such ad ran on Fox News minutes before the president’s Twitter post on Thursday morning.”

He made the move against the advice of his own director of the National Economic Council, Gary Cohn, and his defense secretary, Jim Mattis.

As is Trump’s wont, he doubled down defending his hasty decision by trying to render something fraught and nuanced as simple and easy.

He tweeted Friday, at 5:50 a.m. no less, that “trade wars are good, and easy to win.” Only a simpleton with no true comprehension of global trade systems would say such a thing. And he did.

As is the case most often with this man, the subjects aren’t simple, but his understanding is.

It is this constant attempt to render the big things small and to make his limited knowledge and ability appear not only sufficient but extraordinary, that leads to Trump’s constant state of chaos.

Trump keeps trying to bend the world to meet him, rather than rising to meet the world. That has never worked and never will. It only compounds the chaos."

Trump: King of Chaos - The New York Times
Posted by John H Armwood II at 7:42 AM