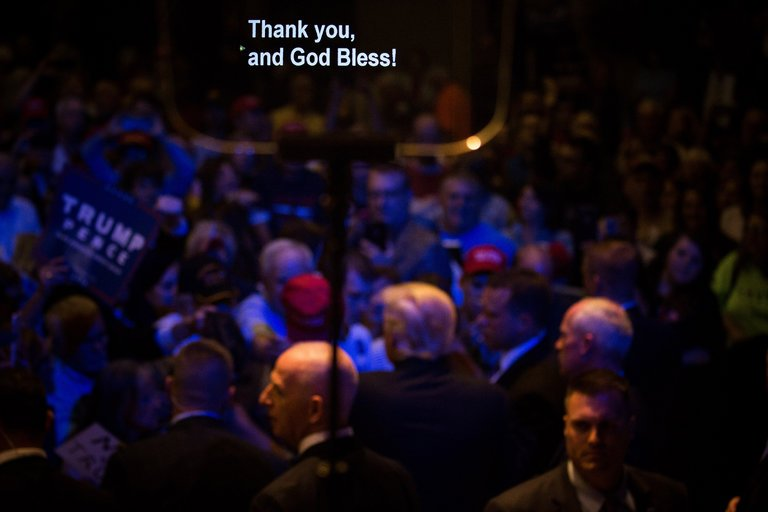 "I have lived my whole life with a Republican Party with which I disagreed, but at least understood.
The first election I can remember was the presidential election of 1980. I was 10 years old. I didn’t know much about politics or party platforms. I only knew that the former peanut-farmer president, Jimmy Carter, was running against a former actor, Ronald Reagan.
But it was in that election that Jerry Falwell and his Moral Majority reintroduced religious activism into American politics. Speaking at a Dallas convention of Christian fundamentalists, Falwell proclaimed: “During the 1980s, preachers, we have a threefold primary responsibility. No. 1: Get people saved. No. 2: Get them baptized. No. 3: Get them registered to vote.”
The religious activism was in many ways a direct response to the strides made in the 1960s and 1970s on racial equality, women’s rights and gay rights.

In a way, their driving motivation was to make religious law into American law, really not so unlike the Shariah law they so fear and despise.
My brothers and I stayed up late with my mother to watch the returns on election night in 1980. When it was clear that the actor had beaten the farmer, my mother quietly left the room, and an air of solemnity and sadness filled it.
For the three decades that followed, I could count on one thing: the conservative right was the religious right. That was its branding, if not always its behavior. It was as if the foot soldiers for the conservative right had read only half of the Bible they thumped. They were harsh and vindictive like the God of the Old Testament, not generous and inclusive like the Jesus of the New Testament.
Then there were the hypocrites, condemning sexual liberation while being secretly lascivious, their railing against gays later exposed as a form of gay panic.

But now, all the pretense of any “moral” majority and “moral” authority has vanished into the very impulses that fed it: Tribal racial/ethnic anxiety, panic and hostility, patriarchy and sexism, and a perceived threat presented by the full acceptance and inclusion of L.G.B.T. identities.
Piety is now postscript. The principal motivation now is anger, fear of cultural displacement, and anxiety about the erosion of privilege and the guarantees it once provided, from physical safety to financial security.

You can peg any number of moments in recent history when the objective seemed to change for the members of the religious right, where they swallowed all pride and principle to secure power and vent anger, but for me there is none more glaring than the embrace of Donald Trump.
Trump is clearly not a religious man, unless you believe being compulsively devilish is a form of religiosity. He is mean and surly. He is a bully. He is a pathological liar. He cheats. He is an adulterer. He is twice-divorced with children by three different women. He bragged, on tape, about assaulting women. He says he doesn’t think he has ever asked God for forgiveness.

Trump was a walking, talking rebuke of everything the Christian right had ever told me that it stood for, and yet Republican voters either held their noses or thrust their fists in the air and voted for him anyway.

The anger that gave birth to Trump was a death notice for Republican religious principles. Now, if you ask me what the Republican Party stands for, I’m not sure I can tell you. All I see is regression, wealth worship, nationalism and white supremacy. Maybe that’s it. I no longer see Christ in that equation.

In the wake of all that, we now have the former Alabama Supreme Court judge Roy Moore running for the U.S. Senate as a Republican. Moore has been accused by multiple women in Alabama of having inappropriate sexual contact with them when they were still minors and he was in his 30s, working as a district attorney.

The accusations are serious and not easily dismissed. And yet Moore has denied them, vociferously and unequivocally. Someone here is telling a vicious lie. It’s a he said/she, she, she, she, she said. Not to mention the people interviewed by The New Yorker who say that Moore was banned from a local mall for harassing girls.

What has been most distressing and revelatory is the contortions Moore’s supporters have put themselves in to try to defend him against the allegations.

It would be one thing it they were simply saying that they didn’t believe the allegations, but they’re not. They’re also giving “Even if it did happen …” rationales that suggest that pedophilia is acceptable if you are willing and able to advance a certain cultural agenda. It should be noted that the possibility of pedophilia is a common mythology that religious conservatives use as a cudgel against gay people, to justify wanting to deny them equal rights.

Not only has Moore’s alleged sexual contact with a 14-year-old girl been illogically likened to the relationship between Joseph and Mary of the Bible, a puke-worthy comparison, but the corrosion of principle and the moral deprivation of the modern right might best be summed up by a tweet written by David Horowitz, author of “The Politics of Bad Faith.” Horowitz wrote:
“In my view Moore is guilty as accused. But 1) it happened 30 years ago, & 2) he can’t be removed from the ballot, & 3) electing a Dem strengthens a party that defends these criminals: Obama, the Clintons, Holder, Lynch, Abedin, Cheryl Mills, etc., & their crimes are far, far worse.”
If Moore is “guilty as accused,” these people prefer a devil to a Democrat. That’s not about religious rigor, that’s ideological extremism on a Middle Eastern scale. That is a country-ruining worldview. There remains a possibility that Moore, like Trump, could win in spite of the controversy.
The “religious right” as an idea is dead. There are religious people, and many are on the right, but the idea of religiosity as an organizing principle for conservatives has passed. Trump helped kill it. This incarnation of conservatism has burned its cross and erected the golden calf of Trumpism in its place.

Trump is the right’s new religion.