The US Needs to Be Treated Like the Racist Pariah State It Is Will the international community finally rise in solidarity with black people against the white American regime of oppression and violence?

Will the international community finally rise in solidarity with black people against the white American regime of oppression and violence? 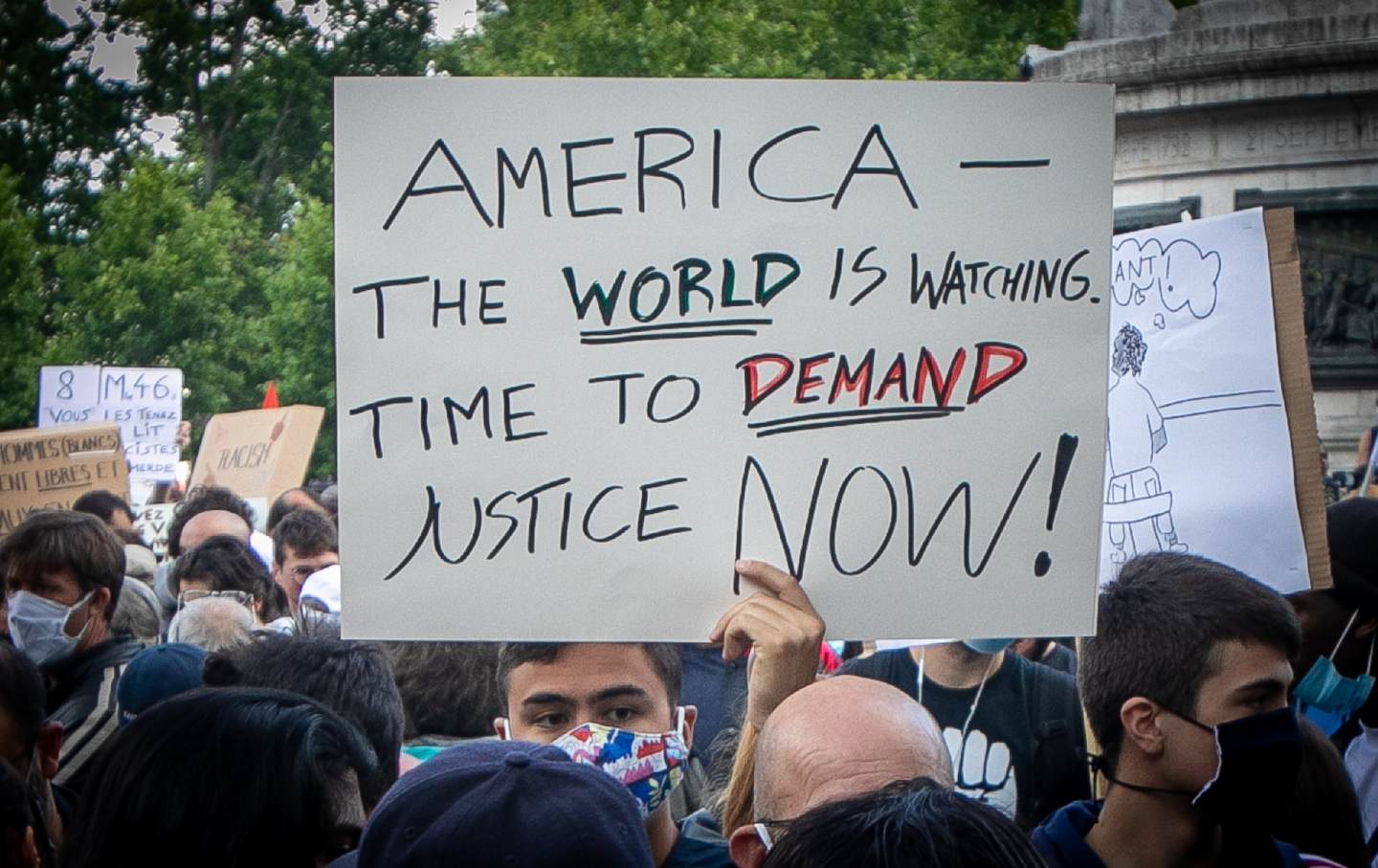 A man wearing a face mask holds a placard during a rally at Place de la Republique in Paris organized by 'SOS Racisme' against racism and police brutality on June 9, 2020.  (Marc Piasecki / Getty Images)

The first time I really became aware of apartheid was in a Foot Locker in 1989, when I was around 11 years old. I had seen the movie Cry Freedom, though I kind of thought Stephen Biko, Desmond Tutu, and Nelson Mandela were all the same guy at various stages of life. I knew apartheid was “bad,” kind of like segregation but way worse, and not really a problem for me, an African American boy who was freed by Martin Luther King Jr. and Malcolm X.

Apartheid didn’t become my problem until I was sitting in that Foot Locker trying on a pair of Reebok’s new Pump sneakers. I was positive those shoes would literally make me jump higher, and I was excited to get my hands on them. I couldn’t understand why the Foot Locker guy, a black man whom I had just seen sell the shoes to a white customer, sat down next to me and told me I couldn’t buy those shoes.

Reebok had officially joined the economic boycott of South Africa in 1987, but rumors persisted in the African American community that the company was still doing business in or somehow involved with the racist South African regime. The Foot Locker guy explained to me that protesting against apartheid wasn’t enough, that we (black people) didn’t have enough economic power to make directly boycotting South African businesses effective. We also had to boycott companies that didn’t boycott South Africa.

The Foot Locker guy was persuasive. Not buying one particular brand of shoe seemed like the very least I could do to support my international brothers and sisters. I left the store with a pair of Jordans. I never was able to jump high enough to dunk.

Lots of factors brought white South Africa to heel—most important, the tireless work of black South Africans, who demanded their humanity despite terror, torture, and imprisonment. But the moral suasion of the international community, the shaming and the economic boycotts, also helped.

White South Africa was defeated in my lifetime, during my formative years. So, I’ve always wondered if the international community would ever rise in solidarity against the white American regime of oppression and violence—the one that operates at home as well as abroad. The white ruling class in America has nothing on the visceral brutality and structural terrorism of the South African apartheid regime. There’s a difference between fighting Loki and fighting Thanos. But black Americans could still use some help in our own centuries-long struggle against white oppression. Nobody who fights racism should fight alone.

The spread of the George Floyd protests across the globe marks the first time I’ve ever had hope that the international community—even the Europeans, who can still largely be blamed for all of this—might someday start treating white America with the kind of moral outrage and economic distancing it deserves.

Black Lives Matter protests have broken out in nearly every European nation, Australia, Japan, Brazil, and, of course, South Africa. The world is watching and, apparently, is appalled by America’s version of brutalizing its own citizens.

It’s also heartening that these protesters are confronting some of the racial biases in their own societies. Statues of King Leopold II are being removed in Belgium. King Leopold would be on everybody’s top 10 list of the most destructively racist men ever to have lived, if everybody actually knew about him. Black people living under white rule around the world are having a moment.

The Rev. Mark Thompson surfaced the idea of divestment from America, in the wake of George Floyd’s murder. A unified global community against American-style police and military brutality could be a powerful thing.

I do not think any of this global solidarity would be happening without the traveling shame-circus that is Donald Trump. Since the latter years of the 20th century, American presidents have shielded white Americans from international moral opprobrium over the country’s racist policies by saying all the right things on the international stage. American presidents talk about human rights. They talk about healing and respect for different peoples. They hold the United States out as a beacon of human potential, a place where, no matter where you come from or what you look like, you can expect a fair shake and an opportunity to succeed. If you are a person of color living anywhere else in the world, you can always imagine that coming to America will be better, if not for you, then for your children.

That message has never been true for black people. Nonetheless, the belief in that message hampers the standing of African Americans on the global stage. African Americans who have traveled internationally know that in many parts of the world, there are people who blame us for the discrimination we face in our own country. When the United States is thought to be the “land of opportunity,” some international observers assume that black people can’t “make it” here because of our own cultural flaws. When America is viewed as oppressive, some observers wonder why black people here don’t “rise up” against the white man. I’ve got a whole Thomas Friedman book worth of stories from cab drivers, born in far-off countries, asking me why African Americans are so “lazy” or “docile,” depending on whatever they heard on Rush Limbaugh before I asked them to turn it off. “Barack Obama did it, why can’t the rest of you?”

Those conversations do not happen to me anymore. This was true even before the murder of George Floyd and the eruption of mass protests against police brutality. Trump, unintentionally, has shown the world the truth about American-style racism. In his words and actions, the international community can see the contempt in which he holds all nonwhite people, from those who live in “shithole” countries to his own fellow citizens. They see him praising and retweeting white nationalists. They see him advocating police brutality. And now they’ve seen him threaten to use the most lethal military on Earth against his own people.

They also see that a dedicated majority of white Americans steadfastly approve of his message. Even as Trump’s approval generally craters, he still holds a five-point advantage in the polls over Joe Biden among white voters. Oh, white people can (and will, repeatedly) say “not all white people” or “I didn’t vote for him.” But being members of the ruling ethnicity in a racially oppressive country carries collective benefits, and collective complicity.

I’m not sure white Americans are prepared for the global derisiveness that comes from being viewed as likely supporters of an overtly racist regime. Americans are already thought to be crass, thoughtless, and uneducated; on the world stage, their country is seen as an aggressor nation, starting wars and squeezing the economic life out of poorer, browner countries. The injustice of its foreign policy is already well known. But a country that “gases its own people” reaps its own kind of censure. White South Africans can tell you that “most racist nation” status is hard to live with.

The American economy is too big and too critical to world markets for the international community to “divest” from America like it once did from South Africa. But that doesn’t mean the United States is immune from global economic retribution. Trump has already postponed the G-7 summit (the one he initially intended to have at his golf course), but it wasn’t clear that everybody would come, seeing how poorly this country has handled the coronavirus pandemic. If world leaders start getting pressure from their own people to stop dealing with the Trump regime, that could lead to an economic cooling the markets would notice, especially now that we are officially in a recession.

But the most important economic pressure could be brought to bear on American corporations themselves. K-pop fans have been flexing serious muscle on social media. Fans of the boy band BTS recently took over the “white lives matter” hashtag to drag racists all over these here interwebs. What happens if those fans decide to stop streaming blockbuster American movies as a way to honor George Floyd? What if European consumers stop buying iPhones? What if Mexicans and Canadians stop buying American-branded cars? Losing the moral high ground can come with a serious economic downside.

I’m 42 years old. South Africa has been free for over 25 years, and I’ve still never bought a pair of Reebok sneakers. Some habits stick long after the reason you adopted them pass on. The world is watching how white people here react to the George Floyd protests. I suggest they govern themselves accordingly.“