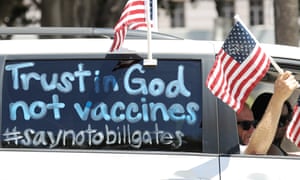 "America’s “anti-vaxxer movement” would pose a threat to national security in the event of a “pandemic with a novel organism”, an FBI-connected non-profit research group warned last year, just months before the global coronavirus pandemic began.


In a research paper put out by the little-known in-house journal of InfraGard – a national security group affiliated with the FBI – experts warned the US anti-vaccine movement would also be connected with “social media misinformation and propaganda campaigns” orchestrated by the Russian government.
Since the virus hit America, anti-vaccination activists and some sympathetic legislators around the country have led or participated in protests against stay-at-home orders designed to slow the spread of the deadly virus. More than 50,000 people have died in the US.
On its website, InfraGard says it is an “FBI-affiliated nonprofit organization dedicated to strengthening national security” with a mission to protect “United States critical infrastructure”. It says it consists of local chapters and that “an FBI special agent from each field office is assigned to serve as a private sector coordinator”.
The paper, jointly written by a security consultant and a senior doctor in New York State’s largest hospital network, warned: “The biggest threat in controlling an outbreak comes from those who categorically reject vaccination.”
The paper, entitled The Anti-Vaxxers Movement and National Security, was co-written by Dr Mark Jarrett, the chief quality officer, senior vice-president and associate chief medical officer at Northwell Health; and Christine Sublett, a health industry-focused cybersecurity consultant.
It lays out a pandemic scenario remarkably similar to the one now afflicting the US along with most of the world, including that “social distancing and isolation have impacts that include loss of manufactured goods, reduced food supply, and other disruptions to the supply chain”.
The article then turns to the anti-vaccine movement, arguing that sufficient resistance to vaccination would hobble the chances of reaching herd immunity to a highly infectious pathogen.
The paper also says that such movements have received a boost in recent years due to their “alignment with other conspiracy movements including the far right … and social media misinformation and propaganda campaigns by many foreign and domestic actors. Included among these actors is the Internet Research Agency, the Russian government–aligned organization.”
Ben Harris-Roxas at the University of New South Wales, an expert on public health, endorsed the epidemiological reasoning in the paper.
“Vaccine hesitancy represents a significant threat – not just for any Covid-19 vaccine that might be developed, but also to measures that might assist people and health services now, such as people getting flu vaccinations,” he said.
Others expressed concerns about the implications of a paper defining a specific group as a national security threat being published under the imprimatur of the FBI.
Michael German, a Brennan Center fellow and former FBI agent and whistleblower, said he was worried about the unintended consequences of defining a group as a national security threat based on their beliefs, and how that might feed into both policy and law enforcement decisions.
“You can imagine some young police officer who’s trying to do a good job protecting his or her community. And all of a sudden he’s told that anti-vaxxers are Russian agents.”
German added that “the lack of proper government preparation and stockpiles of medical materials to respond to a pandemic was a much more serious problem than the influence of a relatively small group of anti-vaxxers could ever be, but it is hard to argue with the need for a science-based policy approach”.
InfraGard has been criticized by civil liberties groups from its origins as a security national entity and links to the FBI.
An FBI spokesperson said: “InfraGard is a non-profit organization serving as a public-private partnership among US businesses, individuals, and the FBI.”
The spokesperson added, “It is important to distinguish among the statements, views, and comments made by official FBI representatives and InfraGard Members”, and declined further comment.
InfraGard Journal’s editor, Dr Ryan Williams, said in a telephone conversation that the journal was peer-reviewed, but received an additional layer of oversight from InfraGard’s board, which includes senior FBI officials and representatives from other partner groups.
Dr Jarrett said the paper had been inspired by the experience of the measles outbreak of early 2019, and its predictions were being borne out in the current crisis.
“Take the pandemic now,” he said. “If they come out with a vaccine and you have 15% of people saying, ‘I don’t want to take it, I don’t believe in it, it’s going to cause harm’, you’re never going to get up to the level of herd immunity to really shut off the process.”
US was warned of threat from anti-vaxxers in event of pandemic | US news | The Guardian
Posted by John H Armwood II at 9:20 AM