"(CNN) — The US increasingly believes that Iran mistakenly shot down a Ukrainian airliner on Wednesday, according to multiple US officials. The working theory is based on continuing analysis of data from satellites, radar and electronic data collected routinely by US military and intelligence.


President Donald Trump on Thursday said he suspected the crash was not due to mechanical issues, indicating that "somebody could have made a mistake on the other side."
Asked during a White House event what he thought happened to the plane, Trump said, "Well, I have my suspicions."
The timing of the crash has fueled speculation about its cause, coming just hours after Iran fired missiles at two Iraqi bases housing US troops in retaliation for the killing of its top general, also in Iraq. The exchange of attacks between Tehran and Washington on Iraqi soil was a dramatic escalation of tensions between the adversaries, and is raising fears of another proxy war in the Middle East." 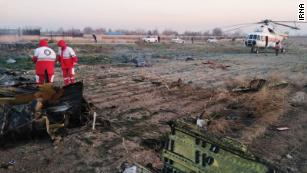